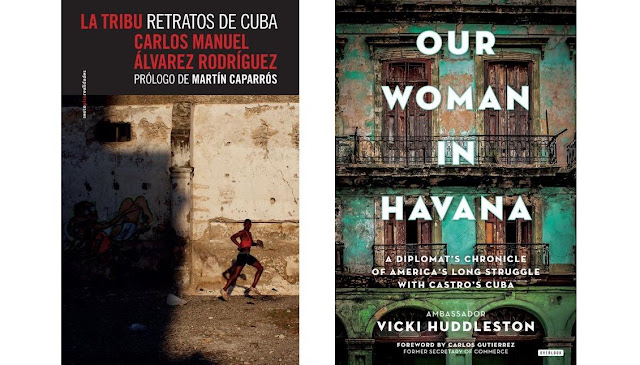 Two books to better understand Cuba
In "La Tribu," the young Cuban writer Carlos Manuel Álvarez portrays the period from the thaw of relations with the United States to the death of Fidel Castro. In "Our Woman in Havana," the former U.S. ambassador defends the rapprochement between Cuba and the U.S.
By Andrea Rodés
July 02, 2018

Carlos Manuel Álvarez Rodríguez (Cárdenas, Cuba, 1989), a young Cuban writer and journalist, recently spoke with AL DÍA. Now living and working in Mexico City as a freelance reporter writing for various foreign media, Álvarez is also the founder of El Estornudo, an independent narrative magazine about Cuba.
A year ago, Álvarez surprised the Latin American public with his non-fiction book "La Tribu" (The Tribe), a collection of portraits of colorful characters that he uses to portray the dramatic changes that occurred in Cuban society between 2014 and 2016, starting with the restoration of relations with the United States, and ending with the death of the historical leader of the revolution, Fidel Castro.
To explain the shifts in Cuban society, the author collects different stories, as reported by The New Yorker journalist Jon Lee Anderson on the website of the book's publisher, Sexto Piso, based in Mexico. Álvarez writes about a group of Cubans who leave the island, seeking fortune in the north; the life of a great poet who has scarcely been published and resigns himself to death in anonymity; the daily routine of a former Tropicana dancer who lives in a garbage dump; the odyssey of a mother determined to recover her daughter's body after her daughter's suicide in another country; and the exciting return of a Cuban baseball player who escaped from the island, was recruited by the Yankees, and then returns to visit his people and his neighborhood after many years. Unfortunately, the book hasn't been translated to English.
Álvarez portrays "the Cuba that lasts, the beloved, the sad and the hated, that of the verses of boleros and now of reggaeton, the one that is forever, whether you like it or not, "wrote Jon Lee Anderson.
The author spends most of his time writing for his magazine, El Estornudo. One of his most recent articles was -of course- about the World Cup. "This is the first World Cup that I see from a country that participates in the World Cup. There were two possibilities for such a thing to happen. The first was that the Cuban team qualified for the event. The second was to leave Cuba. The second option has been fulfilled, something that is not like going around the corner," he wrote "It's not like kicking a penalty, but rather like stopping it, that's complicated, but it's even easier for Cubans to get a visa for any party, a refuge in any city, than scoring a goal and then find someone around to celebrate it with."
The diplomatic perspective

If you prefer to read about Cuba in English, in March of 2018 "Our Woman in Havana: A Diplomat's Chronicle of America's Long Struggle with Castro's Cuba" was published. It's written by Vicki Huddleston, the former U.S. ambassador to Cuba during the presidential administrations of Bill Clinton and George W. Bush.
Raised in Hungry Horse, Montana, Huddleston is an advocate of U.S.-Cuba rapprochement. Her interest in Latin America came about early on in her career: she was a volunteer of the Peace Corps in Peru, before graduating from the School of International Studies at the University of Colorado and being a fellow at the Harvard's Institute of Politics. Before becoming a diplomat in Cuba, she worked for the USAID cooperation agency in Haiti and was an ambassador to Mali and Madagascar.
In an interview with Local 10, Huddleston said that she favored former President Barack Obama’s policy, and the economic reforms that she said fostered the growth of the island’s private sector. President Donald Trump’s reversal of the policy, she said, has failed. She opposes the U.S. embargo.
“It didn't work,” Huddleston said. “It's 50 years, let's try something new."
In another interview, Huddleston said she hopes her book will inspire more women to seek leadership roles.