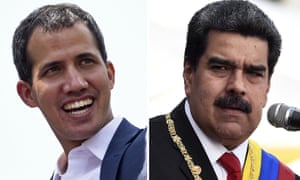 
Nicolás Maduro has issued a thinly veiled threat to the young opposition leader trying to force him from power, hinting that Juan Guaidó could soon be imprisoned as a result of his challenge.
Addressing a meeting of supporters on Monday night, Maduro questioned how long Guaidó – who declared himself Venezuela’s rightful interim president on 23 January – would persist with his “virtual term”.

“Until 2025, too?” Maduro said, referring to the six-year term he recently assumed to a storm of international condemnation. “Or until he ends up in jail by order of the supreme court of justice.”
Western diplomats have expressed surprise that, nearly two weeks after he threw the gauntlet down to the incumbent leader, Guaidó remained a free man. Many attributed that fact to warnings from his key backer, the United States, that any move against him would have consequences.
Donald Trump’s national security adviser, John Bolton, has said that violence against or intimidation of Guaidó or other opposition leaders “would represent a grave assault on the rule of law and will be met with a significant response”.
Venezuelan state media have intensified their campaign against Guaidó and his growing list of international backers in recent days, claiming that they risked plunging the country into war.
On Monday, a succession of European governments, including Britain, France, Germany, Portugal and Spain, recognised Guaidó as Venezuela’s legitimate leader after Maduro rebuffed their call for presidential elections.
During an interview on Tuesday morning on the state-run channel Venezolana de Televisión, the Socialist party politician Gerardo Sánchez said “squalid” and traitorous members of the opposition would be treated “like enemies of the homeland” if their actions sparked foreign military intervention.
Speaking on Monday night, Maduro again railed against “Donald Trump’s extremist policies” towards Venezuela and gave no hint he was preparing to stand aside.
Maduro also condemned US-backed plans to send convoys of humanitarian aid to Venezuela’s western and southern borders later this week as a provocation designed to humiliate his country and his government.
“With this show of humanitarian aid they are trying to send a message: ‘Venezuela has to go begging to the world!’ And Venezuela will not beg for anything from anyone in this world,” he said.
Some observers fear that the aid convoys risk sparking – or may even be designed to spark – a confrontation with Venezuelan troops loyal to Maduro. On Monday, Guaidó urged members of the military to allow the aid into his economically-collapsed country.
In Cúcuta, the busiest crossing on Colombia’s 1,378-mile (2,219 km) border with Venezuela, warehouses were filled with boxes of aid which began to arrive on Sunday evening. Photos shared on social media on Saturday by Mark Green, the head of USAid, showed boxes of food being prepared for delivery, emblazoned with a US flag.
Though it is not yet known how the aid will be delivered to Venezuela, Colombian officials with knowledge of the process said it was an operation lead by Guaidó from Caracas in coordination with US aid workers and regional governments. On Monday, Canada pledged $40m (£31m) of aid destined for Venezuela, while the US last week promised $20m.
THE GUARDIAN