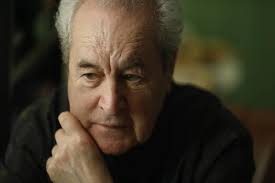 This short novel is divided into two parts. When I finished the first part, I was on the fence about finishing the novel because, while it was beautifully written, it also was a familiar story. But when I finished the second part, my first thought was that this might be a perfect novel.

The story is narrated by Max, an elderly widower who in the wake of his wife’s death has returned to the seashore where he lived as a child. He has rented a room in a house that 50 years ago was rented out by the Grace family, and in his memory he revisits the Graces and his childhood infatuation with first Mrs. Grace and then her daughter, Chloe.
This is a familiar narrative and  a familiar structure: a first-person narrator, moving between two timelines, ruminating over the past and loss and aging. Per Petterson comes to mind, as do William Maxwell and Marilynne Robinson. The writing here is wickedly gorgeous. Take the opening as an example:

They departed, the gods, on the day of the strange tide. All morning under a milky sky the waters in the bay had swelled and swelled, rising to unheard-of heights, the small waves creeping over parched sand that for years had known no wetting save for rain and lapping the very bases of the dunes. The rusted hulk of the freighter that had run aground at the far end of the bay longer ago than any of us could remember must have thought it was being granted a relaunch. I would not swim again, after that day. The seabirds mewled and swooped, unnerved, it seemed, by the spectacle of that vast bowl of water bulging like a blister, lead-blue and malignantly agleam.

On and on. The novel would be a good study in style, particularly for Banville’s use of commas, which create a rhythm that sounds like the ebb and flow of the sea. I’ve seen critics compare Banville to Nabokov. Lolita is the only Nabokov I’ve read, but I can see similarities in terms of self-conscious stylistic effects, but also in terms of philosophical inquiry embedded in the prose:

It is not too much to say–well, it is, but I shall say it anyway–that in Chloe the world was first manifest for me as an objective entity. Not my father and mother, my teachers, other children, not Connie Grace herself, no one had yet been real in the way that Chloe was. And if she was real, so, suddenly, was I. She was I believe the true origin in me of self-consciousness.

In the novel’s second half, you gradually become aware that you’re reading more than a run-of-the-mill memory narrative. I don’t want to give anything away, but there are a few reveals at the end that caught me off-guard. I realized I was reading something of a mystery as the plot, what little there is, came together perfectly in the end.