Children's Author Tomi Ungerer / Still Subversive After All These Years


Children's Author Tomi Ungerer: Still Subversive After All These Years 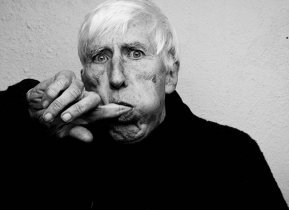 "I have the fullest respect for a piece of white paper which I then shall rape with my drawings and my writing."  from Far Out Isn't Far Enough
Outside librarian circles, the name Tomi Ungerer may not be very familiar. Children's librarians know him as  a writer of both fame and notoriety. I was lucky enough to get a ticket to Far Out Isn't Far Enough: The Tomi Ungerer Story which was screened recently at TIFF. It was easily the best film, out of many very good films, that I saw. In an inspired move, the director, Brad Bernstein, had Ungerer's drawings and posters animated which added enormously to the telling of his story.
Ungerer was born in Strasbourg, Alsace  in 1931. When the war came his mother was hauled in front of local Nazi officials for speaking French. French books were burned. After the war, Alsatians were banned from speaking their German-based dialect.  German books were burned. It's not hard to spot the point in time when his keen sense of the absurd was born.
He didn't start out as a children's author when he moved to New York in 1956, but gained quick success as a graphic artist and illustrator for Life, Esquire, Harper's Bazaar and The New York Times among others.  Often his work was political.

Eventually, he was lured into writing children's books by  Ursula Nordstrom. Norstrom was responsible for discovering and nurturing several prominent writers, including Maurice Sendak, Margaret Wise Brown, E.B. White, Shel Silverstein and Charlotte Zolotow.  Ungerer's satirical humour, lack of sentimentality and renegade drawing style meant he was bound to stand out as an original.  In the film, his friend Maurice Sendak, says, "I'm a self-taught raving maniac, but not as crazy as Tomi. Or as great as Tomi."
There's something slightly dark about Tomi Ungerer's books. Hints of recent violence or violence soon to be perpetrated - sharp knives, battle-axes, faint spots of blood, a Reaper's scythe - pepper his illustrations, although you often have to look hard for them in the spectacularly chaotic crowd scenes he enjoys creating. I think this is part of their appeal to kids; it's a reward and a surprise for paying attention - a slightly perverse I Spy.  In this scene from The Beast of Monsieur Racine, a man has a rather painful-looking injury from the umbrella embedded in his head, and the gendarme beside him has lost a hand. 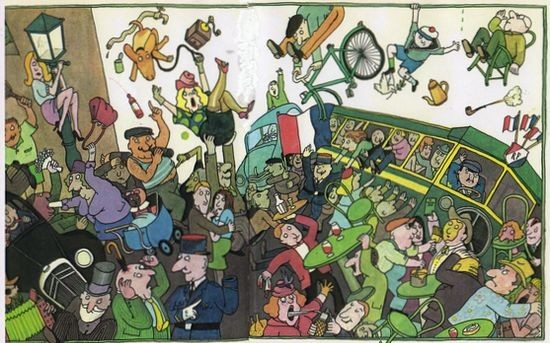 In another illustration, a hobo carries a severed foot in his bundle.  Is it a spare foot for someone used to walking the open road? And why are his eyes red?  There are no tears, so he hasn't been crying.  An adult might ask, is he drunk or stoned, perhaps? 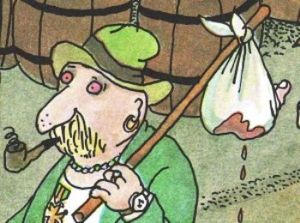 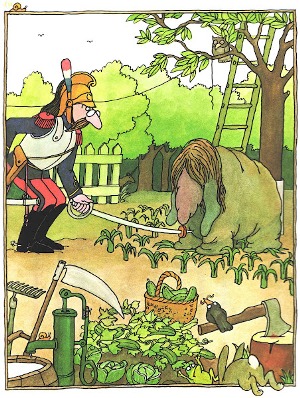 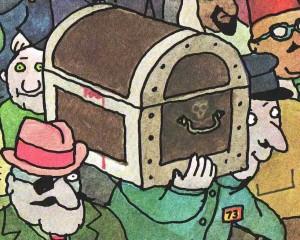 But, for all their darkness, the recurring theme in his books is this: something you thought was a bit scary and grotesque can often be quite beautiful and heroic.  The crime-fighting heroes of Crictor and Emile and Orlando the Brave Vulture are a snake, an octopus and a carrion eater.
The Three Robbers begins ominously:  "In the dark of the night they walked the roads, searching for victims." 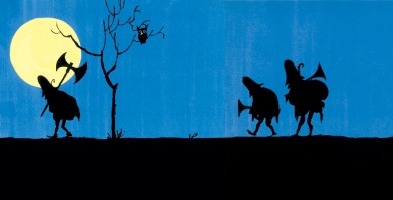 But the robbers turn out to be good guys who use their plunder to start an orphanage.
Despite his award-winning success as a children's book writer, Ungerer continued to illustrate for adults, too.  It was his 1970's collection of sado-masochistic erotica, Fornicon  that brought much criticism down on him (there's a copy in the Special Collections of the Toronto Reference Library). In the film he described attending a conference of the American Library Association and being verbally attacked by several children's librarians. Some of his books were banned. His popularity with publishers waned because of his erotic drawings.  He eventually left New York and didn't write another children's book for more than two decades.
His life also has a Canadian connection. He and his wife lived in Gull Harbour, Nova Scotia for a few years, a time chronicled in the book he wrote and illustrated, Far Out Isn't Far Enough.  Although beautifully illustrated with local scenery and plant and animal life, it doesn't sound as if it was a particularly happy time for him. The book ends in carnage after a pack of dogs (joined by their own beloved Sacha) attacked the Ungerer's herd of sheep, killing several, and in a scene straight out of Far From the Madding Crowd, driving the rest over the edge of a cliff.   After that, they closed the farm down.
Now living in Ireland, Tomi Ungerer has, in recent years, experienced a renaissance of sorts, at least in Europe.  In 1998 he was awarded the Hans Christian Anderson Prize , the most prestigious international award for children's literature, and he became an Officer of the Legion d'Honneur in 2000.  He even has his own museum in Strasbourg which opened in 2007.  I believe through word of mouth, the documentary about his life  will reach an audience in North America, and Tomi Ungerer, once despised, ostracised and forgotten, will be rediscovered.  Until it comes to the theatre, rediscover the renegade Tomi Ungerer yourself by visiting the library.
Update: Far Out Isn't far Enough is the story of Tomi Ungerer's entire career, and as such, this trailer includes images from the above-mentioned collection of his erotic drawings, Fornicon.