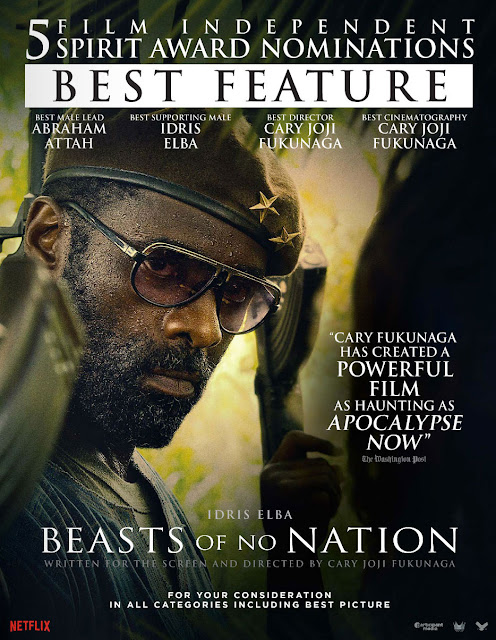 
Beast of No Nation

D
irector Cary Fukunaga has handled projects as diverse as the migrant drama Sin Nombre, a Jane Eyre adaptation with Mia Wasikowska and Michael Fassbender, and episodes of TV’s True Detective. This film, premiering at the Venice film festival, is his best film yet.


Fukunaga brings flair, muscular storytelling, directness and a persuasively epic sweep to this brutal, heartrending movie about child soldiers and a civil war in an imaginary West African country, based on the 2005 novel by Nigerian-American author Uzodinma Iweala.

It is a tale of fear, degradation and abusive dysfunction – a violent and disorientating nightmare with a shiver of Coppola’s Apocalypse Now. Idris Elba gives an outstanding performance as a charismatic and sinister warlord who finds that military power, however intoxicating, is subject to the fickle imperatives of politics, and the suit-wearing opportunists in the cities far from the country badlands he has come to rule.
Newcomer Abraham Attah plays Agu, a nine-year-old boy whose village stands in a UN-regulated buffer zone adjoining a warring neighbouring state: his father, a teacher, has given some family-owned land to help house the refugees, a gesture that has alienated some in the community. Soon the chaos spreads over the border; Agu’s own country is torn apart by civil war.
His family falls prey to swaggering, trigger-happy soldiers and Agu runs, terrified, for his life, where he is taken up by a factional rebel unit in the jungle, led by the imperious Commandant (Elba), who in his enigmatic and unpleasant way, has taken a shine to little Agu and, instead of having him killed, decrees that he will be trained as a child soldier in his battalion. 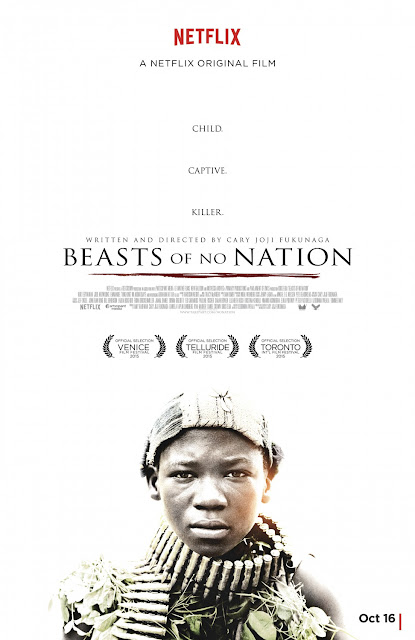 These soldiers, dead-eyed and obedient to the Commandant, vary in age from kids to teens and early twenties, but they are all clearly feral and scary as children who have been given guns and trained to obey a father-figure at an impressionable stage.
Elba’s Commandant, like some warped preacher, has trained his men not merely to bark “Yes sir!” to each of his orders, but to chant and moan ritualistic replies like church congregants. “How does the Commandant look?” calls out his second-in-command. “Looks good!” they reply.
The Commandant is whimsical, eccentric, affecting a conventional military beret but in other ways preferring to look like a bandit: Idris Elba’s performance gives him that important aura of leadership that keeps his men in line, but he displays none of the occasional humour and charm shown by, say, Forest Whitaker in his portrayal of Idi Amin. 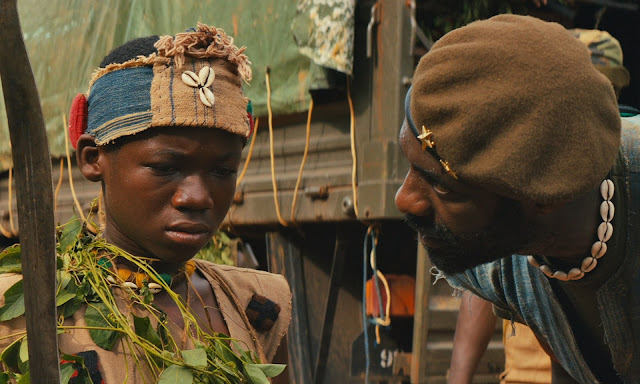 Agu has to surrender both his childhood and his humanity and become a monster of violence. Initiation ceremonies include running a gauntlet and taking part in a voodooistic mock funeral and resurrection. It is all but unwatchable when the Commandant hands Agu a machete and orders him to murder a civilian engineering student in cold blood.
To keep fighting, Agu and the others are given heroin, which they ingest in a grotesque masochistic warrior style of slashing wounds in the side of their head and rubbing it in. A delirium and horror soon sets in, and Fukunaga shows that Agu’s horrendous experiences do not propel him into a precocious adulthood but rather make him regress into a pre- or non-human state: a dazed survivor-killer, with neither the child’s innocence nor the adult’s intelligence or perspective. 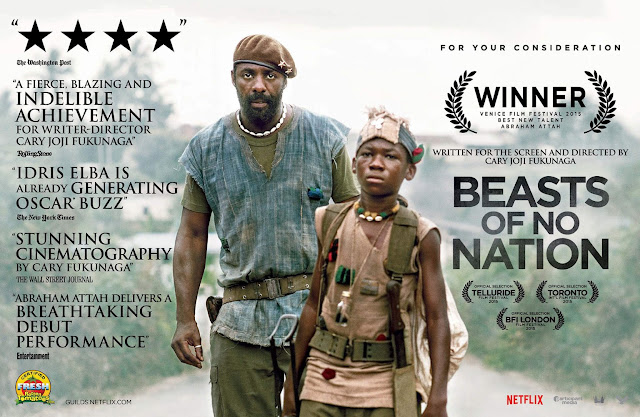 As for the Commandant himself, he is not exactly a Kurtzian chieftain-god of the jungle: his weapons and provisions all come from the political faction he is fighting for and to whom he is beholden.
His favourite, Agu, is almost taken into the Commandant’s confidence about all this. But it is clear Agu’s ordeal is to reach a new low in an ambiguous scene in which he is subject to yet further intimate abuse. As the weeks and months of fighting continue, the Commandant and his men realise the prospect of victory is receding, replaced by the possibility of being rendered up to a war crimes tribunal. 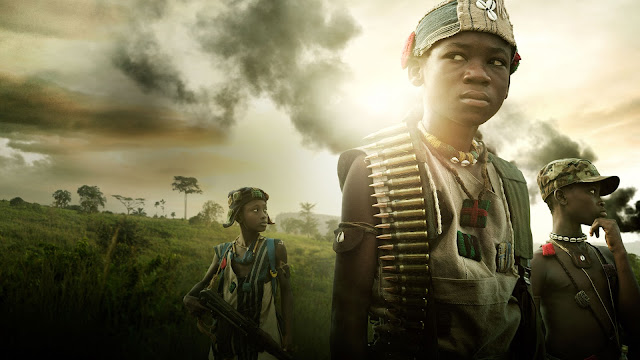 The narrative voice of the film is Agu, sometimes given a potent and thoughtful voiceover. After he kills for the first time – a Satanically inverted coming-of-age moment – Agu reflects on what death smells like: “Sweet like sugar cane; rotten like palm wine.” Despite his dehumanisation, however, Agu achieves a kind of insight into himself when he is finally questioned by a kindly, well-meaning teacher, whose bland condescending smile betrays her lack of understanding about what he has gone through: “I am not a baby – I am an old man and she is a small girl.”
This is a very powerful and confidently made movie, a film that really puts its audience through the wringer, which finally refuses any palliative gestures, with towering performances from Elba and Attah. The awards season really has begun.
THE GUARDIAN