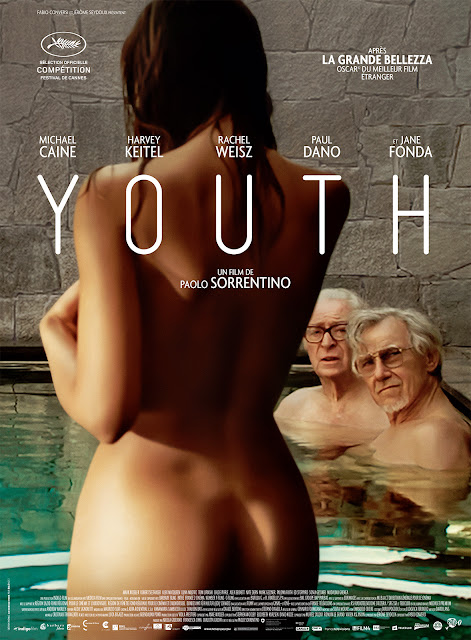 Paolo Sorrentino: ‘I never use a crude approach to showing the naked bodies of older people’

After winning an Oscar for The Great Beauty, the director had the pick of Hollywood for his next film, Youth. Why was he so keen on persuading the British veteran Michael Caine to step up?

F
rance has some of the toughest anti-smoking laws in Europe, but they don’t cut much ice with Paolo Sorrentino. Having taken over an upstairs bar in Paris’s St-Germain-des-Prés to hold court, the Oscar-winning film-maker is openly puffing on what can only be described as a stogie. Coupled with a pair of unexpectedly luxuriant sideburns, Sorrentino looks like he might have just staggered off the set of a Sam Peckinpah western – which, you suspect, is just how he would like it.

In between puffs, Sorrentino explains his thinking behind Youth, his first film since the Academy Award-winning The Great Beauty. Sorrentino admits the extra attention cuts both ways; but it no doubt helped him land Michael Caine for the lead role of an 80-year-old composer/conductor who is resisting being tempted out of retirement for a special birthday concert for our own Prince Philip.
Prior to The Great Beauty, Sorrentino, now 45, was a distinguished resident of the Euro art-house, best known for films such as The Consequences of Love and Il Divo, and is arguably the leader of a new-ish wave of exciting Italian directors. Both those films feature the exquisitely world-weary actor Toni Servillo in the lead role, as did The Great Beauty. Post-Oscar, though, Sorrentino could hunt bigger game, and says he went after Caine because he was the only actor he could think of who “had the iconic importance I wanted the character to have”. It remains unclear whether the actor is aware of his director’s back catalogue. (“I sent him my previous films, but I don’t know if he ever watched them.”)

In any case, Caine’s interest was piqued by more mundane matters: it was the first time he had been asked to play a conductor. It seemed to work out for him. “He wrote me a beautiful letter after seeing the film, saying he was deeply touched,” says Sorrentino. “He described how, during the trip back home in the taxi with his wife, he kept on crying.”
Fred Ballinger, the composer he plays, loafs around a high-tone Swiss spa hotel with his old pal Mick, a veteran Hollywood film director played by Harvey Keitel, and casts a wearied eye over human frailties – both his own and those of people around him. His daughter (Rachel Weisz) is going through emotional meltdown; Mick is trying to get a film – his “testament” – off the ground; a young movie star (Paul Dano) is trying to shake off the disgrace of popularity; Miss Universe is skinny-dipping in the hot tub; a Diego Maradona-alike is attempting to shed the pounds. Most of all, though, our hero is attempting to deflect a persistent emissary from the royal family, who want him to stage a concert for the prince’s birthday. Ballinger, in brief, doesn’t want to.
Sorrentino says the trigger was a real-life news story: in 2008, Riccardo Muti – like Sorrentino, a son of Naples – bailed out of an engagement in which he was supposed to be conducting for the Windsors. (Though, in reality, it was for Prince Charles’s birthday, not Philip’s.) “That is something that impressed,” says Sorrentino. “I didn’t think you could say ‘no’ to a queen. But he did.”


Sorrentino devotees have been asking why Servillo was not handed the role – especially since Caine appears to cut an image so physically similar – but the director insists it was always his intention to shoot in English, and therefore dispense with Servillo’s services. (Sorrentino has gone down this road before, with This Must Be the Place, in which Sean Penn starred as musician attempting to track down the former Nazi who tortured his father.)
Despite not being entirely confident in English, Sorrentino says working with Caine was easy. “Great actors,” he says, operate “as if they are playing an instrument. I rely on the musical rhythm of their acting, and this somehow compensates for my lack of knowledge of the language.” Sorrentino was also impressed by Caine’s “professionalism” – apparently, the actor timed to the second exactly how long it would take for him to walk from his hotel bedroom to where the crew was shooting. He also says it was the actor’s idea to be rather obviously reading the Guardian in several scenes, despite having backed David Cameron during the 2010 election.

In the complex jigsaw puzzle of character and script, Sorrentino reveals it was Mick, the film director character, who pushed him in this direction. (“When I thought about the character, he was a Hollywood director, and it came naturally for me to make the film in English.) Mick, he says, is far from being an autobiographical creation, and in fact is a fairly non-specific film-maker – “a little bit of Roger Corman, a bit of Sidney Lumet, a bit of William Friedkin”.
Be that as it may, Youth shares with The Great Beauty a facility for the startling, hallucinatory image, as well as a preoccupation with the mottled, orangey flesh of ageing Eurotrash types attempting to preserve what’s left of their ... well ... youth. Sorrentino, however, insists that his purpose is not to ridicule, or to mock. “I restrain from criticising or judging my characters. I am more inclined to summon up their beauty through their weaknesses and the lack of taste that we all have. I try to transfer the beauty I see in them on to the screen. I never use a morbid or crude approach to showing the naked bodies of older people. That would mean stressing an ugliness I don’t see in those bodies.”
Sorrentino is also quick to knock back the suggestion that there’s anything odd about what you might call the film’s “male gaze” – most obviously called up in the film’s poster image, where Caine and Keitel ogle an unrobed Madalina Ghenea. “I am fully convinced that the opposite is true. Being a man, I am much more critical of my own gender. Because women are a mystery to me, I tend to have positive projections on to them. Probably the fact that I don’t know them means I idealise them much more than I can with male characters.”
Even if Youth turns out not to have the same extraordinary impact as The Great Beauty, Sorrentino is not afraid to make big claims on its behalf. “It’s about what the two characters realise is the possibility of having youth as a goal. It’s something they have in themselves despite the reality of ageing. In that, there’s the beauty of freedom, and the beauty of freedom is not being free to do whatever you want, but being aware and acknowledging the possibility of freedom.
“Knowing that it exists means you can make the best out of what you have. If you are married, you know that, with a divorce, you can end it. But the beauty of the situation is staying married because you know you have the possibility of divorce.”
Clear? Sorrentino puffs his stogie one last time. “The prerequisite to being able to do all that is what my mother summarises like this: what counts is being healthy.” No one can argue with that.