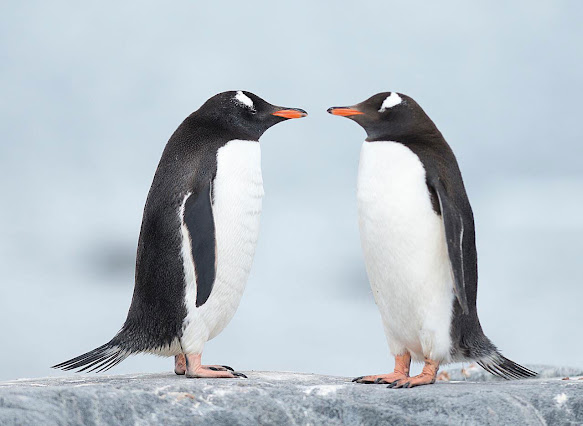 This summer's movie stars are not the usual bipeds, but other animals — emperor penguins and grizzly bears. Their performances are pertinent to some ongoing arguments. 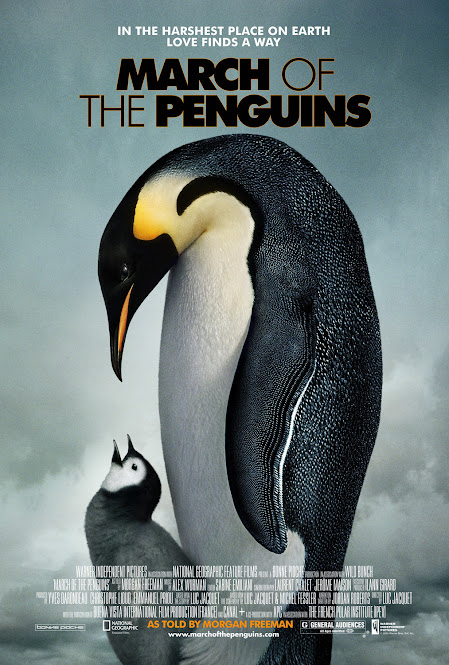 "March of the Penguins" raises this question: If an Intelligent Designer designed nature, why did it decide to make breeding so tedious for those penguins? The movie documents the 70-mile march of thousands of Antarctic penguins from the sea to an icy breeding place barren of nutrition. These perhaps intelligently but certainly oddly designed birds march because they cannot fly. They cannot even march well, being most at home in the sea.

In temperatures of 80 below and lashed by 100 miles per hour winds, the females take months to produce an egg while the males trek back to the sea to fatten up.

Returning, the males are entrusted with keeping the eggs warm during foodless months while the females march back to the sea to fill their stomachs with nutriments they will share with the hatched chicks.

The penguins' hardiness is remarkable, as is the intricate choreography of the march, the breeding and the nurturing. But the movie, vigorously anthropomorphizing the birds, invites us to find all this inexplicably amazing, even heroic. But the penguins are made for that behavior in that place. What made them? Adaptive evolution. They have been "designed" for all that rigor — meaning they have been shaped by adapting to many millennia of nature's harshness.

Speaking of harshness, Timothy Treadwell, college dropout, drug abuser and failed actor, became a Southern California beach bum, had a heroin overdose and then an epiphany: He must spend summers in Alaska "protecting" the grizzlies. The idea that these huge, robust carnivores need protection provided by this mentally wobbly narcissist — a developmentally-arrested adolescent in his 40s — would be funny, had not Alaska officials "hauled four garbage bags of people out of the bear" that devoured Treadwell and his girlfriend at the end of his fifth summer filming grizzlies bears to which he gave cute names like Mr. Chocolate and Sgt. Brown.

About half of "Grizzly Man," a documentary about Treadwell, is his film. The rest consists of interviews with, among others, a dry-eyed Alaskan who says "he got what he was asking for." Although Treadwell has been described as an "animal lover,' the grandiosity of his self-praise as he preens and waxes metaphysical in front of his camera reveals that his great love was himself.

His cooing of "I love you" at magnificently indifferent bears and his swooning over the warmth of bear feces ("This was just inside of her!") is as repulsive as his weeping over evidence that nature really is red in tooth and claw. Evidence such as bear cubs killed by mature male bears so the mother will stop lactating and be sexually available. Call that the Summer of Love, Alaska-style.

Treadwell was not far from mental illness, or from a social stance — nature is sweet, civilization is nasty — not easily distinguished from mental illness. Call it '60s Envy. So, see "Grizzly Man," then read T.C. Boyle's 2003 novel "Drop City." It is about a bunch of Treadwells who, having dropped out and dropped acid, are addled but able to see that their California commune, based on "voluntary primitivism," has become overrun with inane philosophy and the communards' sewage. Also, the county sheriff is angry. So a few of them decide to found Drop City North in Alaska. As one of these pioneers explains, in Alaska there are "no rules" but there are food stamps.

There they plan "to live the vegetarian ideal" but where will the cheese come from, now that a wolverine has eaten the communal goats? When an Alaskan explains that "we eat bear and anything else we can get our hands on," a nature worshipper is horrified: 'But to kill another creature, another living soul, a soul progressing through all the karmic stages to nirvana' — she paused to slap a mosquito on the back of her wrist with a neat slash of her hand — 'that's something I just couldn't do.'

The movies and novel prompt a thought: Reality's swirling complexity is sometimes lovely, sometimes brutal; its laws propel the comings and goings of life forms in processes as impersonal as Antarctica is to the penguins or the bears were to Treadwell or Alaska was to Drop City North.

It is so grand that nothing is gained by dragging an Intelligent Designer into the picture for praise. Or blame.

Email ThisBlogThis!Share to TwitterShare to FacebookShare to Pinterest
Labels: Animals