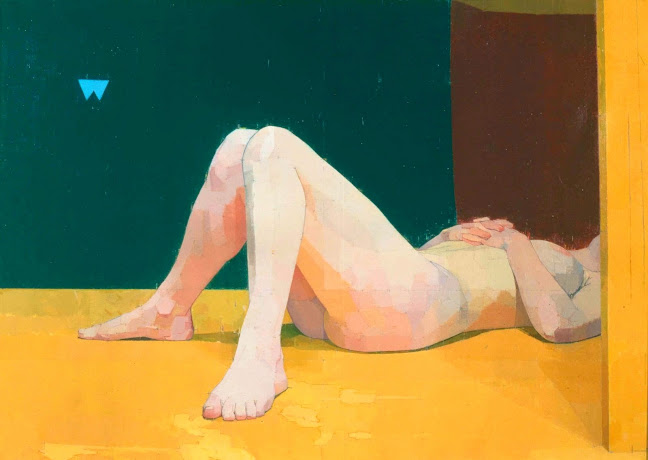 One of my favorite British painters is Euan Uglow ( 1932 - 2000 ). His work is painterly, precise and visually compelling. He worked from life almost exclusively and focused mostly on still-life, interiors and the figure. Uglow studied with William Coldstream at the Slade School of Art and is considered a contemporary of Lucien Freud.

There are many reasons I’m drawn to his work so l’ll start with the idea of color spot painting, an approach to seeing color by Charles Hawthorne. I find similarities in the way these two artists thought about color from my current read of  Hawthorne's book, On Painting,  Hawthorne advocates color spot painting and staying true to what you see by painting from observation from life; mainstays of Uglow’s work. Below are examples:

Note how the flat color shapes describe the form in a geometric and precise way - Euan was a keen and patient observer! There is also a nice balance in the way these flat shapes of color come together that is sculptural and beautifully describes light on form. This kind of integration between flat shapes and 3-D form is pleasing to the eye and creates a tension of ideas: flat vs 3-D within the painting. This also speaks to variety within unity, an ideal I strive for in my own work.

“Painting is just getting one spot of color in relation to another spot…. Let color make form, do not make form and Color it.”  Hawthorne

Part of Uglow’s distinct style is the way he used tick marks to find his way along the form, bring out structure, and align his observations of the parts to the whole. This is the essence of relational seeing and is easier said than done, we tend to fragment our observations when moving from the larger forms to the finish ( details ). The tick marks are, in a way, also a diary of process and remain visible in many of his finished works.

Below: Curves against straight lines create a tension of opposites while tick-marks and grid lines activate a sense of structure and space… planes, geometry, architectonic???

The mechanics of putting one spot of color next to another, that is the fundamental thing.     Charles Hawthorne

A brief word about Charles Hawthorne and the Cape Cod School. Hawthorne influenced artists like Edwin Dickinson, Hans Hoffman and Henry Hensche. He was known for teaching color spot painting which has one main purpose: to train the eye to see by means of paint on the canvas. It is considered a visual tool not a style of painting and is not opposed to other methods of drawing or painting. For an in-depth article explaining this approach visit:

On Painting by Charles Hawthorne is a quick read with lots of gems about painting.  Another book that explains the approach is How to See Color and Paint It by Arthur Stern. Following the practical exercises in this book was transformative in opening my eyes to color. Along with timely advice from Eric Bowman who one day encouraged me to go outside and paint because it will teach you a lot about color. : - )

Color for Euan Uglow evolved from using a sparse palette of yellow ochre and cold black to laying out 13 - 14 colors plus white. He was meticulous about keeping his colors clean and followed the traditional “ fat over lean “ principles of oil painting. He combined transparent and opaque colors and believed that painting with oil was the ideal medium for him. Infamous for long sittings with the model Uglow took great care to mark and set up the pose with plumb lines and sighting strings. These spatial reference points are a part of his deliberate thoughtful approach to design that are integrated into the painting as a grid of tick-marks and lines.

Night Series: Getting a lot with a little using a limited palette of just yellow ochre and cold black. He would later add scarlet red to his palette for this series.

There are many individual paths one can take but I also believe in universals. Euan Uglow is an example of a contemporary painter who worked in a tradition and tailored it it to his vision and aesthetics - I am inspired.