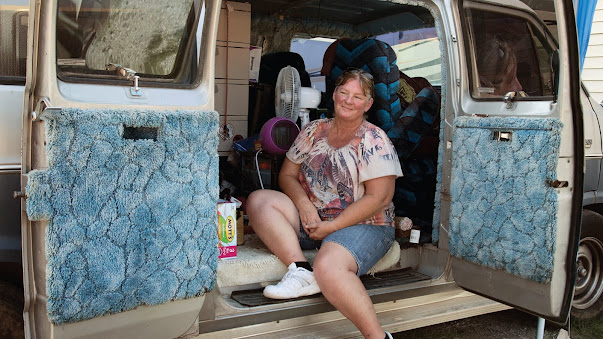 Rising rents are leading Americans to live in cars and other vehicles, writes Jessica Bruder, the author of Nomadland

Millions of Americans are wrestling with the impossibility of a traditional middle-class existence. In homes across the country, kitchen tables are strewn with unpaid bills. Lights burn late into the night. The same calculations get performed again and again, through exhaustion and sometimes tears.

Wages minus grocery receipts. Minus medical bills. Minus credit card debt. Minus utility fees. Minus student loan and car payments. Minus the biggest expense of all: rent.

In the widening gap between credits and debits hangs a question: which bits of this life are you willing to give up, so you can keep on living?

During three years of research for my book, Nomadland: Surviving America in The Twenty-First Century, I spent time with hundreds of people who had arrived at the same answer. They gave up traditional housing and moved into “wheel estate”: RVs, travel trailers, vans, pickup campers, even a salvaged Prius and other sedans. For many, sacrificing some material comforts had allowed them to survive, while reclaiming a small measure of freedom and autonomy. But that didn’t mean life on the road was easy.

My first encounter with one group of the new nomads came in 2013, at the Desert Rose RV park in Fernley, Nevada. It was populated by members of the “precariat”: temporary laborers doing short-term jobs in exchange for low wages. Its citizens were full-time wanderers who dwelled in RVs and other vehicles, though at least one guy had only a tent to live in. Many were in their 60s and 70s, approaching or well into traditional retirement age. Most could not afford to stop working – or pay the rent.

Since 2009, the year after the housing crash, groups of such workers had migrated each fall to the mobile home parks surrounding Fernley. Most had traveled hundreds of miles – and undergone the routine indignities of criminal background checks and pee-in-a-cup drug tests – for the chance to earn $11.50 an hour plus overtime at temporary warehouse jobs. They planned to stay through early winter, despite the fact that most of their homes on wheels weren’t designed to support life in subzero temperatures.

Their employer was Amazon.

Amazon recruited these workers as part of a program it calls CamperForce: a labor unit made up of nomads who work as seasonal employees at several of its warehouses, which the company calls “fulfillment centers”.

Along with thousands of traditional temps, they’re hired to meet the heavy shipping demands of “peak season” – the consumer bonanza that spans the three to four months before Christmas.

While other employers also seek out this nomadic workforce – the available jobs range from campground maintenance to selling Christmas trees and running amusement park rides – Amazon has been the most aggressive recruiter. “Jeff Bezos has predicted that, by the year 2020, one out of every four work-campers – the RV- and vehicle-dwellers who travel the country for temporary work – in the United States will have worked for Amazon,” read one slide in a presentation for new hires.

Amazon doesn’t disclose precise staffing numbers to the press, but when I casually asked a CamperForce manager at an Amazon recruiting booth in Arizona about the size of the program, her estimate was some 1,400 workers.

The workers’ shifts last 10 hours or longer, during which some walk more than 15 miles on concrete floors, stooping, squatting, reaching, and climbing stairs as they scan, sort, and box merchandise. When the holiday rush ends, Amazon no longer needs CamperForce and terminates the program’s workers. They drive away in what managers cheerfully call a “taillight parade”.

Amazon has been the most aggressive recruiter of this nomadic workforce. Photograph: Jessica Bruder

The first member of CamperForce I corresponded with at great length, over a period of months, was a man I’ll call Don Wheeler. Don had spent the last two years of his main career as a software executive, traveling to Hong Kong, Paris, Sydney and Tel Aviv.

Retiring in 2002 meant he could finally stay in one place: the 1930s’ Spanish colonial revival house he shared with his wife in Berkeley, California. It also gave him time to indulge a lifelong obsession with fast cars. He bought a red-and-white Mini Cooper S and souped it up to 210 horsepower, practicing until he was named third overall in the US Touring Car Championship pro series.

When I started exchanging emails with Don, he was 69, divorced, and staying at the Desert Rose RV park near the warehouse in Fernley. His wife had gotten to keep the house. The 2008 market crash had vaporized his savings. He had been forced to sell the Mini Cooper. In his old life, he’d spent about $100,000 a year. In his new one, he learned to get by on as little as $75 a week.

By the end of the 2013 holiday season, Don anticipated he’d be working at the Amazon warehouse five nights a week until just before dawn, on overtime shifts lasting 12 hours, with 30 minutes off for lunch and two 15-minute breaks. He’d spend most of the time on his feet, receiving and scanning inbound freight. “It’s hard work, but the money’s good,” he explained.

Don told me that he was part of a growing phenomenon. He and most of the CamperForce – along with a broader spectrum of itinerant laborers – called themselves “workampers”. Though I’d already stumbled across that word, I’d never heard anyone define it with as much flair as Don. He wrote in a Facebook direct message to me:

Workampers are modern mobile travelers who take temporary jobs around the US in exchange for a free campsite – usually including power, water and sewer connections – and perhaps a stipend. You may think that workamping is a modern phenomenon, but we come from a long, long tradition.

We followed the Roman legions, sharpening swords and repairing armor. We roamed the new cities of America, fixing clocks and machines, repairing cookware, building stone walls for a penny a foot and all the hard cider we could drink.

We followed the emigration west in our wagons with our tools and skills, sharpening knives, fixing anything that was broken, helping clear the land, roof the cabin, plow the fields and bring in the harvest for a meal and pocket money, then moving on to the next job.

Our forebears are the tinkers. We have upgraded the tinker’s wagon to a comfortable motor coach or fifth-wheel trailer.

Mostly retired now, we have added to our repertoire the skills of a lifetime in business. We can help run your shop, handle the front or back of the house, drive your trucks and forklifts, pick and pack your goods for shipment, fix your machines, coddle your computers and networks, work your beet harvest, landscape your grounds or clean your bathrooms.

Other workampers I spoke with had their own ways of describing themselves. Many said they were “retired”, even if they anticipated working well into their 70s or 80s. Others called themselves “travelers”, “nomads”, “rubber tramps”, or, wryly, “gypsies”.

Outside observers gave them other nicknames, from “the Okies of the Great Recession” to “American refugees”, “the affluent homeless”, even “modern-day fruit tramps”.

There’s no clear count of how many people live nomadically in America. Full-time travelers are a demographer’s nightmare. Statistically they blend in with the rest of the population, since the law requires them to maintain fixed – in other words, fake – addresses.

Despite a lack of hard numbers, anecdotal evidence suggests the ranks of American itinerants started to boom after the housing collapse and have kept growing.

The cause of the unmanageable household math that drives some people to become nomads is no secret.

Federal minimum wage is stalled at $7.25 an hour. The cost of shelter continues to climb. There are now only a dozen counties and one metro area where a full-time minimum-wage worker can afford a one-bedroom apartment at fair market rent.

At the same time, the top 1% now makes 81 times more than those in the bottom half do, when you compare average earnings. For American adults on the lower half of the income ladder – some 117 million of them – earnings haven’t changed since the 1970s.

The most widely accepted measure for calculating income inequality is a century-old formula called the Gini coefficient. What it reveals is startling. Today the United States has the most unequal society of all developed nations. America’s level of inequality is comparable to that of Russia, China, Argentina and the war-torn Democratic Republic of the Congo.

And a bad as that economic situation is now, it’s likely to get worse. That makes me wonder: what further contortions of the social order will appear in years to come? How many people will get crushed by the system? How many will find a way to escape it?

Despite mounting pressures – including a nationwide crackdown on vehicle-dwelling – America’s modern-day nomads show great resilience. But how much of that toughness should our culture require for basic membership? And when do all the impossible choices start to tear people – a society – apart? The growing ranks of folks living on the road suggest the answer might be: much sooner than we think.

Excerpted from Nomadland: Surviving America in the Twenty-First Century by Jessica Bruder.