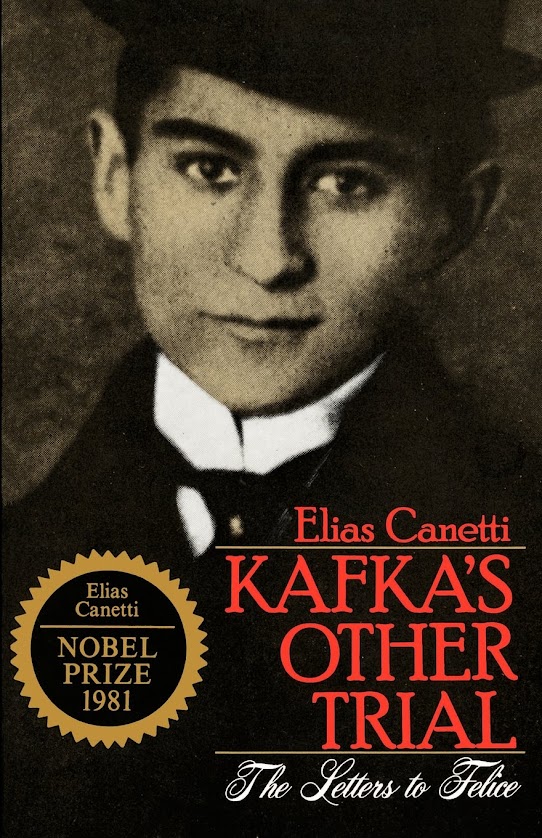 Although much of Penguin Modern Classics time now seems to be spent publishing what they call ‘pure classic escapism’, every so often they release something interesting and unusual, a perfect example being Elias Canetti’s Kafka’s Other Trial. Canetti was a restless Jewish intellectual, one among many who light up the literature of Europe during the twentieth century. Born in Bulgaria, educated in Vienna, he moved to London during the war, and then relocated to Zurich where he died in 1994 (having received the Nobel Prize in 1981). That he was restless intellectually can be seen from the fact that his best known works cover a number of genres: the novel Auto da Fe, a three volume autobiography, and a study of crowd behaviour, Crowds and Power.

Kafka’s Other Trial is also a study, an examination of the letters Kafka wrote to Felice (which were published in 1967) in connection with his fiction, particularly The Trial. Canetti says he “found these letters more gripping and absorbing than any literary work I have read for years past.” The Penguin Classics edition of Letters to Felice comes in at around 700 pages so, if nothing else, Canetti provides a useful summary of the relationship. As only Kafka’s letters remain, his explanation of the circumstances surrounding the letters, including reference to other letters Kafka wrote at the time, is vital to a full understanding of the relationship, which is far from straight forward.

Kafka and Felice first meet in the apartment of Max Brod on August 13th, 1912. He writes to her for the first time over a month later but, as Canetti says, “The correspondence developed rapidly with daily letters coming from Kafka and Felice soon replying at the same rate.” The letters are especially important as, despite becoming engaged, they rarely meet. It is clear that Kafka prefers an epistolary relationship as even when they plan to meet he resists certainty:

“And besides it is not yet at all certain that I’ll come; it won’t be decided until tomorrow morning…”

Even as he establishes a closeness with her that is characterised by his excessive honesty, he resists her actual presence, as Canetti comments:

“One of the countermyths he has set up for his own protection, seeking to prevent physical proximity and Felice’s intrusion into his life, is the one that involves his aversion to children.”

Basically, if you’re writing a thesis on the emotional selfishness of artists then take a look at Kafka. His letters are almost entirely taken up by discussion of himself: his ailments, his writing, his constant anguish over their relationship. He is so self-absorbed it is difficult not to feel a certain amount of admiration for him alongside the repugnance.

Also, as Canetti argues, the relationship has a positive effect on his writing:

“The opening of the correspondence was so important for Kafka that its effects continued to be felt by him for three months; further, it led to works as singular as The Metamophosis.”

Canetti goes on to suggest that events in the relationship, in particular their engagement and the ‘tribunal’ which followed, were an important influence on The Trial:

“It can be shown that the emotional substance of both events entered directly into The Trial which Kafka began to write in August, The engagement becomes the arrest in the first chapter; the ‘tribunal’ appears as the execution in the last.”

Kafka’s Other Trial is a fascinating work of biography and literary criticism. It is not a good introduction to Kafka because he is not easy to like outside his work, but for those who have read him it adds another dimension to understanding his work.