Mr. and Mrs. Elliott by Hemingway 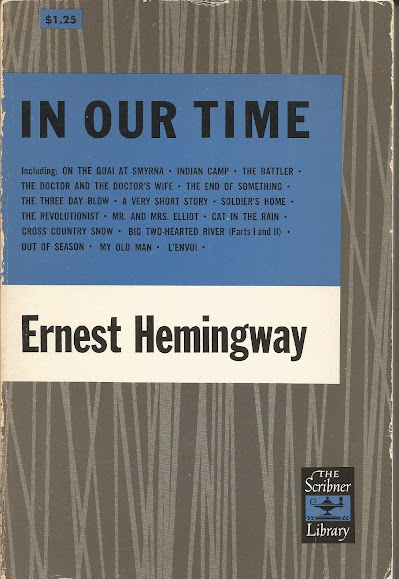 Mr. and Mrs. Elliot tried very hard to have a baby. They tried as often as Mrs. Elliot could stand it. They tried in Boston after they were married and they tried coming over on the boat. They did not try very often on the boat because Mrs. Elliot was quite sick. She was sick and when she was sick she was sick as Southern women are sick. That is women from the Southern part of the United States. Like all Southern women Mrs. Elliot disintegrated very quickly under sea sickness, travelling at night, and getting up too early in the morning. Many of the people on the boat took her for Elliot's mother. Other people who knew they were mar訃ied believed she was going to have a baby. In reality she was forty years old. Her years had been precipitated suddenly when she started travelling.

She had seemed much younger, in fact she had seemed not to have any age at all, when Elliot had married her after several weeks of making love to her after knowing her for a long time in her tea shop before he had kissed her one evening.

Hubert Elliot was taking post graduate work in law at Harvard when he was married. He was a poet with an income of nearly ten thousand dollars a year. He wrote very long poems very rapidly. He was twenty-five years old and had never gone to bed with a woman until he mar訃ied Mrs. Elliot. He wanted to keep himself pure so that he could bring to his wife the same purity of mind and body that he expected of her. He called it to himself living straight. He had been in love with various girls before he kissed Mrs. Elliot and always told them sooner or later that he had led a clean life. Nearly all the girls lost interest in him. He was shocked and really horrified at the way girls would become engaged to and marry men whom they must know had dragged themselves through the gutter. He once tried to warn a girl he knew against a man of whom he had almost proof that he had been a rotter at college and a very unpleasant incident had resulted.

Mrs. Elliot's name was Cornelia. She had taught him to call her Calutina, which was her family nickname in the South. His mother cried when he brought Cornelia home after their marriage but brightened very much when she learned they were going to live abroad.

Cornelia had said, "You dear sweet boy," and held him closer than ever when he had told her how he had kept himself clean for her. Cornelia was pure too. "Kiss me again like that," she said.

Hubert explained to her that he had learned that way of kissing from hearing a fellow tell a story once. He was delighted with his experiment and they developed it as far as possible. Sometimes when they had been kissing together a long time, Cornelia would ask him to tell her again that he had kept himself really straight for her. The declaration always set her off again.

At first Hubert had no idea of marrying Cornelia. He had never thought of her that way. She had been such a good friend of his, and then one day in the little back room of the shop they had been dancing to the gramophone while her girl friend was in the front of the shop and she had looked up into his eyes and he had kissed her. He could never remember just when it was decided that they were to be married. But they were married.

They spent the night of the day they were married in a Boston hotel. They were both disappointed but finally Cornelia went to sleep. Hubert could not sleep and several times went out and walked up and down the corridor of the hotel in his new Jaeger bathrobe that he had bought for his wedding trip. As he walked he saw all the pairs of shoes, small shoes and big shoes, outside the doors of the hotel rooms. This set his heart to pounding and he hurried back to his own room but Cornelia was asleep. He did not like to waken her and soon everything was quite all right and he slept peacefully.

The next day they called on his mother and the next day they sailed for Europe. It was possible to try to have a baby but Cornelia could not attempt it very often although they wanted a baby more than anything else in the world. They landed at Cherbourg and came to Paris. They tried to have a baby in Paris. Then they decided to go to Dijon where there was summer school and where a number of people who crossed on the boat with them had gone. They found there was nothing to do in Dijon. Hubert, however, was writing a great number of poems and Cornelia typed them for him. They were all very long poems. He was very severe about mistakes and would make her re-do an entire page if there was one mistake. She cried a good deal and they tried several times to have a baby before they left Dijon.

They came to Paris and most of their friends from the boat came back too. They were tired of Dijon and anyway would now be able to say that after leaving Harvard or Columbia or Wabash they had studied at the University of Dijon down in the Côte d'Or. Many of them would have preferred to go to Languedoc, Montpellier or Perpignan if there are universities there. But all those places are too far away. Dijon is only four and a half hours from Paris and there is a diner on the train.

So they all sat around the Café du Dome, avoiding the Rotonde across the street because it is always so full of foreigners, for a few days and then the Elliots rented a château in Tou訃aine through an advertisement in the New York Herald. Elliot had a number of friends by now all of whom admired his poetry and Mrs. Elliot had prevailed upon him to send over to Boston for her girl friend who had been in the tea shop. Mrs. Elliot became much brighter after her girl friend came and they had many good cries together. The girl friend was several years older than Cornelia and called her Honey. She too came from a very old Southern family.

The three of them, with several of Elliot's friends who called him Hubie, went down to the château in Touraine. They found Touraine to be a very flat hot country very much like Kansas. Elliot had nearly enough poems for a book now. He was going to bring it out in Boston and had already sent his check to, and made a contract with, a publisher.

In a short time the friends began to drift back to Paris. Touraine had not turned out the way it looked when it started. Soon all the friends had gone off with a rich young and unmarried poet to a seaside resort near Trouville. There they were all very happy.

Elliot kept on at the château in Touraine because he had taken it for all summer. He and Mrs. Elliot tried very hard to have a baby in the big hot bedroom on the big, hard bed. Mrs. Elliot was learning the touch system on the typewriter, but she found that while it increased the speed it made more mistakes. The girl friend was now typing practically all of the manuscripts. She was very neat and efficient and seemed to enjoy it. Elliot had taken to drinking white wine and lived apart in his own room. He wrote a great deal of poetry during the night and in the morning looked very exhausted. Mrs. Elliot and the girl friend now slept together in the big mediaeval bed. They had many a good cry together. In the evening they all sat at dinner together in the garden under a plane tree and the hot evening wind blew and Elliot drank white wine and Mrs. Elliot and the girl friend made conversation and they were all quite happy.