On the Quai at Smyrna by Hemingway 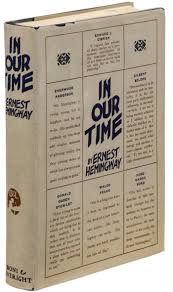 ON THE QUAI AT SMYRNA
by Ernest Hemingway
BIOGRAPHY

THE strange thing was, he said, how they screamed every night at midnight. I do not know why they screamed at that time. We were in the harbour and they were all on. the pier and at midnight they started screaming. We used to turn the searchlight on them to quiet them. That always did the trick. We'd run the searchlight up and down over them two or three times and they stopped it. One time I was senior officer on the pier and a Turkish officer came up to me in a frightful rage because one of our sailors had been most insulting to him. So I told him the fellow would be sent on ship and be most severely punished. I asked him to point him out. So he pointed out a gunner's mate, most inoffensive chap. Said he'd been most frightfully and repeatedly insulting; talking to me through an interpreter. I couldn't imagine how the gunner's mate knew enough Turkish to be insulting. I called him over and said, 'And just in case you should have spoken to any Turkish officers.'
'I haven't spoken to any of them, sir.'
'I'm quite sure of it,' I said, 'but you'd best go on board ship and not come ashore again for the rest of the day.'
Then I told the Turk the man was being sent on board ship and would be most severely dealt with. Oh, most rigorously. He felt topping about it. Great friends we were.
The worst, he said, were the women with dead babies. You couldn't get the women to give up their dead babies. They'd have babies dead for six days. Wouldn't give them up. Nothing you could do. about it. Had to take them away finally. Then there was an old lady, most extraordinary case. I told it to a doctor and he said I was lying. We were clearing them off the pier, had to clear off the dead ones, and this old woman was lying on a sort of litter. They said, 'Will you have a look at her, sir?' So I had a look at her and just then she died and went absolutely stiff. Her legs drew up and she drew up from the waist and went quite rigid. Exactly as though she had been dead over night. She was quite dead and absolutely rigid. I told a medical chap about it and he told me it was impossible.
They were all out there on the pier and it wasn't at all like an earthquake or that sort of thing because they never knew about the Turk. They never knew what the old Turk would do. You remember when they ordered us not to come in to take off any more? I had the wind up when we came in that morning. He had any amount of batteries and could have blown us clean out of the water. We were going to come in, run close along the pier, let go the front and rear anchors and then shell the Turkish quarter of the town. They would have blown us out of water but we would have blown the town simply to hell. They just fired a few blank charges at us as we came in. Kemal came down and sacked the Turkish commander. For exceeding his authority or some such thing. He got a bit above himself. It would have been the hell of a mess.
You remember the harbour. There were plenty of nice things floating around in it. That was the only time in my life I got so I dreamed about things. You didn't mind the women who were having babies as you did those with the dead ones. They had them all right. Surprising how few of them died. You just covered them over with something and let them go to it. They'd always pick out the darkest place in the hold to have them. None of them minded anything once they got off the pier.
The Greeks were nice chaps too. When they evacuated they had all their baggage animals they couldn't take off with them so they just broke their forelegs and dumped them into the shallow water. All those mules with their forelegs broken pushed over into the shallow water. It was all a pleasant business. My word, yes, a most pleasant business.
In Our Time (Nueva York: Charles Scribner's Sons, 1930.)The Fifth Column and the First Forty-Nine Stories (Nueva York: Charles Scribner's Sons, 1938.)In Our Time (Nueva York: Charles Scribner’s Sons, 1955.)