A Simple Enquiry by Hemingway 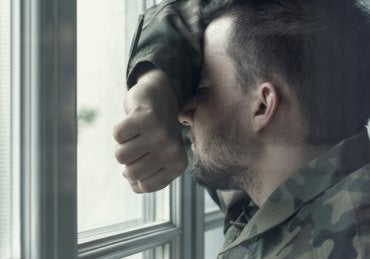 Outside, the snow was higher than the window. The sunlight came in through the window and shone on a map on the pine-board wall of the hut. The sun was high and the light came in over the top of the snow. A trench had been cut along the open side of the hut, and each clear day the sun, shining on the wall, reflected heat against the snow and widened the trench. It was late March. The major sat at a table against the wall. His adjutant sat at another table.

Around the major's eyes were two white circles where his snow-glasses had protected his face from the sun on the snow. The rest of his face had been burned and then tanned and then burned through the tan. His nose was swollen and there were edges of loose skin where blisters had been. While he worked at the papers he put the fingers of his left hand into a saucer of oil and then spread the oil over his face, touching it very gently with the tips of his fingers. He was very careful to drain his fingers on the edge of the saucer so there was only a film of oil on them, and after he had stroked his forehead and his cheeks, he stroked his nose very delicately between his fingers. When he had finished he stood up, took the saucer of oil and went into the small room of the hut where he slept. "I'm going to take a little sleep," he said to the adjutant. In that army an adjutant is not a commissioned officer. "You will finish up."

"Yes, signor maggiore," the adjutant answered. He leaned back in his chair and yawned. He took a paper-covered book out of the pocket of his coat and opened it; then laid it down on the table and lit his pipe. He leaned forward on the table to read and puffed at his pipe. Then he closed the book and put it back in his pocket. He had too much paper-work to get through. He could not enjoy reading until it was done. Outside, the sun went behind a mountain and there was no more light on the wall of the hut. A soldier came in and put some pine branches, chopped into irregular lengths, into the stove. "Be soft, Pinin," the adjutant said to him. "The major is sleeping."

Pinin was the major's orderly. He was a dark-faced boy, and he fixed the stove, putting the pine wood in carefully, shut the door, and went into the back of the hut again. The adjutant went on with his papers.

Pinin walked across the main room of the hut toward the major's door. He knocked on the half-opened door. "Signor maggiore?"

"Come in," the adjutant heard the major say, "and shut the door."

Inside the room the major lay on his bunk. Pinin stood beside the bunk. The major lay with his head on the rucksack that he had stuffed with spare clothing to make a pillow. His long, burned, oiled face looked at Pinin. His hands lay on the blankets.

"You are nineteen?" he asked.

"You have ever been in love?"

"How do you mean, signor maggiore?"

"I have been with girls."

"I did not ask that. I asked if you had been in love--with a girl."

"You are in love with this girl now? You don't write her. I read all your letters."

"Tonani," the major said in the same tone of voice, "can you hear me talking?"

There was no answer from the next room.

"He can not hear," the major said. "And you are quite sure that you love a girl?"

"And," the major looked at him quickly, "that you are not corrupt?"

"I don't know what you mean, corrupt."

"All right," the major said. "You needn't be superior."

Pinin stood still beside the bunk.

"Don't be afraid," the major said. His hands were folded on the blankets. "I won't touch you. You can go back to your platoon if you like. But you had better stay on as my servant. You've less chance of being killed."

"Do you want anything of me, signor maggiore?"

"No," the major said. "Go on and get on with whatever you were doing. Leave the door open when you go out."

Pinin went out, leaving the door open. The adjutant looked up at him as he walked awkwardly across the room and out the door. Pinin was flushed and moved differently than he had moved when he brought in the wood for the fire. The adjutant looked after him and smiled. Pinin came in with more wood for the stove. The major, lying on his bunk, looking at his cloth-covered helmet and his snow-glasses that hung from a nail on the wall, heard him walk across the floor. The little devil, he thought, I wonder if he lied to me.