An Alpine Idyll by Hemingway 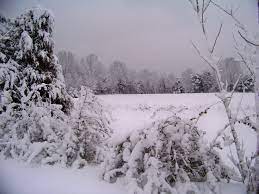 It was hot coming down into the valley even in the early morning. The sun melted the snow from the skis we were carrying and dried the wood. It was spring in the valley but the sun was very hot. We came along the road into Galtur carrying our skis and rucksacks. As we passed the churchyard a burial was just over. I said, "Grüss Gott," to the priest as he walked past us coming out of the churchyard. The priest bowed.

"It's funny a priest never speaks to you," John said.

We stopped in the road and watched the sexton shovelling in the new earth. A peasant with a black beard and high leather boots stood beside the grave. The sexton stopped shovelling and straightened his back. The peasant in the high boots took the spade from the sexton and went on filling in the grave--spreading the earth evenly as a man spreading manure in a garden. In the bright May morning the grave-filling looked unreal. I could not imagine any one being dead.

"Imagine being buried on a day like this," I said to John.

We went on up the road past the houses of the town to the inn. We had been skiing in the Silvretta for a month, and it was good to be down in the valley. In the Silvretta the skiing had been all right, but it was spring skiing, the snow was good only in the early morning and again in the evening. The rest of the time it was spoiled by the sun. We were both tired of the sun. You could not get away from the sun. The only shadows were made by rocks or by the hut that was built under the protection of a rock beside a glacier, and in the shade the sweat froze in your underclothing. You could not sit outside the hut without dark glasses. It was pleasant to be burned black but the sun had been very tiring. You could not rest in it. I was glad to be down away from snow. It was too late in the spring to be up in the Silvretta. I was a little tired of skiing. We had stayed too long. I could taste the snow water we had been drinking melted off the tin roof of the hut. The taste was a part of the way I felt about skiing. I was glad there were other things beside skiing, and I was glad to be down, away from the unnatural high mountain spring, into this May morning in the valley.

The innkeeper sat on the porch of the inn, his chair tipped back against the wall. Beside him sat the cook.

"Heil!" we said and leaned the skis against the wall and took off our packs.

"How was it up above?" asked the innkeeper.

"Schön. A little too much sun."

"Yes. There's too much sun this time of year."

The cook sat on in his chair. The innkeeper went in with us and unlocked his office and brought out our mail. There was a bundle of letters and some papers.

"Good. We'll drink it inside."

The proprietor brought two bottles and we drank them while we read the letters.

"We better have some more beer," John said. A girl brought it this time. She smiled as she opened the bottles.

"Many letters," she said.

"Prosit," she said and went out, taking the empty bottles.

"You oughtn't to ever do anything too long."

The sun came through the open window and shone through the beer bottles on the table. The bottles were half full. There was a little froth on the beer in the bottles, not much because it was very cold. It collared up when you poured it into the tall glasses. I looked out of the open window at the white road. The trees beside the road were dusty. Beyond was a green field and a stream. There were trees along the stream and a mill with a water wheel. Through the open side of the mill I saw a long log and a saw in it rising and falling. No one seemed to be tending it. There were four crows walking in the green field. One crow sat in a tree watching. Outside on the porch the cook got off his chair and passed into the hall that led back into the kitchen. Inside, the sunlight shone through the empty glasses on the table. John was leaning forward with his head on his arms.

Through the window I saw two men come up the front steps. They came into the drinking room. One was the bearded peasant in the high boots. The other was the sexton. They sat down at the table under the window. The girl came in and stood by their table. The peasant did not seem to see her. He sat with his hands on the table. He wore his old army clothes. There were patches on the elbows.

"What will it be?" asked the sexton. The peasant did not pay any attention.

"What will you drink?"

"And a quarter litre of red wine," the sexton told the girl.

The girl brought the drinks and the peasant drank the schnapps. He looked out of the window. The sexton watched him. John had his head forward on the table. He was asleep.

The innkeeper came in and went over to the table. He spoke in dialect and the sexton answered him. The peasant looked out of the window. The innkeeper went out of the room. The peasant stood up. He took a folded ten-thousand kronen note out of a leather pocket-book and unfolded it. The girl came up.

"Let me buy the wine," the sexton said.

"Alles," the peasant repeated to the girl. She put her hand in the pocket of her apron, brought it out full of coins and counted out the change. The peasant went out the door. As soon as he was gone the innkeeper came into the room again and spoke to the sexton. He sat down at the table. They talked in dialect. The sexton was amused. The innkeeper was disgusted. The sexton stood up from the table. He was a little man with a mustache. He leaned out of the window and looked up the road.

They talked again and then the innkeeper came over to our table. The innkeeper was a tall man and old. He looked at John asleep.

"Will you want to eat soon?"

"Anything you want. The girl will bring the eating-card."

The girl brought the menu. John woke up. The menu was written in ink on a card and the card slipped into a wooden paddle.

"There's the speise-karte," I said to John. He looked at it. He was still sleepy.

"We saw that one at a funeral coming into town."

"That was his wife."

"He's a beast. All these peasants are beasts."

"You wouldn't believe it." The innkeeper spoke to the sexton. "Franz, come over here." The sexton came, bringing his little bottle of wine and his glass.

"The gentlemen are just come down from the Wiesbadenerhütte," the innkeeper said. We shook hands.

"What will you drink?" I asked.

"Nothing," Franz shook his finger.

"Do you understand dialect?" the innkeeper asked.

"What's it all about?" John asked.

"He's going to tell us about the peasant we saw filling the grave, coming into town."

"I can't understand it, anyway," John said. "It goes too fast for me."

"That peasant," the innkeeper said, "to-day he brought his wife in to be buried. She died last November."

"That makes nothing. She died last December then, and he notified the commune."

"Anyway, he couldn't bring her over to be buried until the snow was gone."

"He lives on the other side of the Paznaun," said the sexton. "But he belongs to this parish."

"He couldn't bring her out at all?" I asked.

"No. He can only come, from where he lives, on skis until the snow melts. So to-day he brought her in to be buried and the priest, when he looked at her face, didn't want to bury her. You go on and tell it," he said to the sexton. "Speak German, not dialect."

"It was very funny with the priest," said the sexton. "In the report to the commune she died of heart trouble. We knew she had heart trouble here. She used to faint in church sometimes. She did not come for a long time. She wasn't strong to climb. When the priest uncovered her face he asked Olz, 'Did your wife suffer much?' 'No,' said Olz. 'When I came in the house she was dead across the bed.'

"The priest looked at her again. He didn't like it.

"'You'd better find out,' the priest said, and put the blanket back. Olz didn't say anything. The priest looked at him. Olz looked back at the priest. 'You want to know?'

"This is where it's good," the innkeeper said. "Listen to this. Go on Franz."

"'Well,' said Olz, 'when she died I made the report to the commune and I put her in the shed across the top of the big wood. When I started to use the big wood she was stiff and I put her up against the wall. Her mouth was open and when I came into the shed at night to cut up the big wood, I hung the lantern from it.'

"'Why did you do that?' asked the priest.

"'Did you do that many times?'

"'Every time I went to work in the shed at night.'

"'It was very wrong,' said the priest. 'Did you love your wife?'

"How about eating?" John asked.

"Sure it's true," he said. "These peasants are beasts."

"He's gone to drink at my colleague's, the Löwen."

"He didn't want to drink with me," said the sexton.

"He didn't want to drink with me, after he knew about his wife," said the innkeeper.