Hemingway / The Doctor and the Doctor's Wife 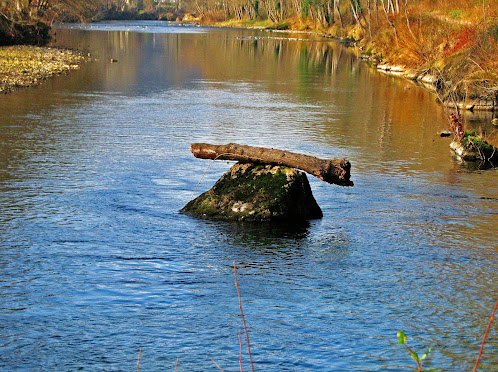 The Doctor and the Doctor's Wife

Dick Boulton came from the Indian camp to cut up logs for Nick's father. He brought his son Eddy, and another Indian named Billy Tabeshaw with him. They came in through the back gate out of the woods, Eddy carrying the long cross-cut saw. It flopped over his shoulder and made a musical sound as he walked. Billy Tabeshaw carried two big cant-hooks. Dick had three axes under his arm.

He turned and shut the gate. The others went on ahead of him down to the lake shore where the logs were buried in the sand.

The logs had been lost from the big log booms that were towed down the lake to the mill by the steamer Magic. They had drifted up onto the beach and if nothing were done about them sooner or later the crew of the Magic would come along the shore in a rowboat, spot the logs, drive an iron spike with a ring on it into the end of each one and then tow them out into the lake to make a new boom. But the lumbermen might never come for them because a few logs were not worth the price of a crew to gather them. If no one came for them they would be left to waterlog and rot on the beach.

Nick's father always assumed that this was what would happen, and hired the Indians to come down from the camp and cut the logs up with the cross-cut saw and split them with a wedge to make cord wood and chunks for the open fireplace. Dick Boulton walked around past the cottage down to the lake. There were four big beech logs lying almost buried in the sand. Eddy hung the saw up by one of its handles in the crotch of a tree. Dick put the three axes down on the little dock. Dick was a half-breed and many of the farmers around the lake believed he was really a white man. He was very lazy but a great worker once he was started. He took a plug of tobacco out of his pocket, bit off a chew and spoke in Ojibway to Eddy and Billy Tabeshaw.

They sunk the ends of their cant-hooks into one of the logs and swung against it to loosen it in the sand. They swung their weight against the shafts of the cant-hooks. The log moved in the sand. Dick Boulton turned to Nick's father.

Eddy and Billy Tabeshaw had rocked the log out of the wet sand and rolled it toward the water.

"What are you doing that for?" asked the doctor.

"Wash it off. Clean off the sand on account of the saw. I want to see who it belongs to," Dick said.

The log was just awash in the lake. Eddy and Billy Tabeshaw leaned on their cant-hooks sweating in the sun. Dick kneeled down in the sand and looked at the mark of the scaler's ham衫er in the wood at the end of the log.

"It belongs to White and McNally," he said, standing up and brushing off his trousers knees.

The doctor was very uncomfortable.

"You'd better not saw it up then, Dick," he said, shortly.

"If you think the logs are stolen, leave them alone and take your tools back to the camp," the doctor said. His face was red.

"Don't go off at half cock, Doc," Dick said. He spat tobacco juice on the log. It slid off, thinning in the water. "You know they're stolen as well as I do. It don't make any difference to me."

"All right. If you think the logs are stolen, take your stuff and get out."

"Take your stuff and get out."

"If you call me Doc once again, I'll knock your eye teeth down your throat."

Dick Boulton looked at the doctor. Dick was a big man. He knew how big a man he was. He liked to get into fights. He was happy. Eddy and Billy Tabeshaw leaned on their canthooks and looked at the doctor. The doctor chewed the beard on his lower lip and looked at Dick Boulton. Then he turned away and walked up the hill to the cottage. They could see from his back how angry he was. They all watched him walk up the hill and go inside the cottage.

Dick said something in Ojibway. Eddy laughed but Billy Tabeshaw looked very serious. He did not understand English but he had sweat all the time the row was going on. He was fat with only a few hairs of mustache like a Chinaman. He picked up the two cant-hooks. Dick picked up the axes and Eddy took the saw down from the tree. They started off and walked up past the cottage and out the back gate into the woods. Dick left the gate open. Billy Tabeshaw went back and fastened it. They were gone through the woods.

In the cottage the doctor, sitting on the bed in his room, saw a pile of medical journals on the floor by the bureau. They were still in their wrappers unopened. It irritated him.

"Aren't you going back to work, dear?" asked the doctor's wife from the room where she was lying with the blinds drawn.

"Was anything the matter?"

"I had a row with Dick Boulton."

"Remember, that he who ruleth his spirit is greater than he that taketh a city," said his wife. She was a Christian Scientist. Her Bible, her copy of Science and Health and her Quarterly were on a table beside her bed in the darkened room.

Her husband did not answer. He was sitting on his bed now, cleaning a shotgun. He pushed the magazine full of the heavy yellow shells and pumped them out again. They were scat負ered on the bed.

"Henry," his wife called. Then paused a moment. "Henry!"

"You didn't say anything to Boulton to anger him, did you?"

"What was the trouble about, dear?"

"Tell me, Henry. Please don't try and keep anything from me. What was the trouble about?"

"Well, Dick owes me a lot of money for pulling his squaw through pneumonia and I guess he wanted a row so he wouldn't have to take it out in work."

His wife was silent. The doctor wiped his gun carefully with a rag. He pushed the shells back in against the spring of the magazine. He sat with the gun on his knees. He was very fond of it. Then he heard his wife's voice from the darkened room.

"Dear, I don't think, I really don't think that anyone would really do a thing like that."

"No. I can't really believe that anyone would do a thing of that sort intentionally."

The doctor stood up and put the shotgun in the corner behind the dresser.

"Are you going out, dear?" his wife said.

"If you see Nick, dear, will you tell him his mother wants to see him?" his wife said.

The doctor went out on the porch. The screen door slammed behind him. He heard his wife catch her breath when the door slammed.

"Sorry," he said, outside her window with the blinds drawn.

He walked in the heat out the gate and along the path into the hemlock woods. It was cool in the woods even on such a hot day. He found Nick sitting with his back against a tree, reading.

"Your mother wants you to come and see her," the doctor said.

His father looked down at him.