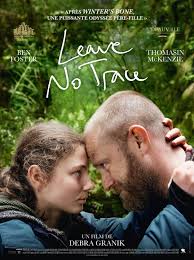 he appearance of Leave No Trace reminded us what a great film-maker Debra Granik is, and what a long time it has been since her last feature, Winter’s Bone, the film in 2010 that made a star of Jennifer Lawrence. Lawrence has hardly been out of the spotlight while Granik has been a little forgotten. Well, this superlative film has brought her back. Ben Foster and Thomasin McKenzie play Will and Tom, a military veteran and his 13-year-old daughter who are living a Thoreau-type guerrilla existence in a huge national park near Portland, Oregon. They are trained and disciplined: they have a secret camp with tarps and cooking implements and they know how to avoid the authorities. Periodically, Will sneaks into the city to pick up his free prescription for painkiller meds, which he sells on the black market in order to buy food and supplies. It seems like the ideal setup, but one day they are spotted, and things come to a crisis.

Will and Tom’s apparent belief in an eternal, Edenic present is striking. There is no sense that either have thought about what it is going to mean when Tom gets too old to share a tent with her dad (surely that moment has already arrived?) or when she wants to meet people her own age. And that question is brought into sharp focus when they are captured – there is hardly any other word for it – and subjected to psychiatric assessment. In some ways, the clinical coldness of this assessment is exactly the kind of soullessness that they were trying to get away from. And yet the assessment is asking them to think about their lives in ways they had perhaps avoided.
In any case, being caught is evidently an occupational hazard: they know how to fake being compliant, going along with the idea of being rehabilitated into society, before discreetly slipping away. It’s a film with things to say about nature and our relationship to it, and how people who do not want to consume, to produce, to surf the waste-byproducts of economic growth that despoil the natural world, should not be labelled as eccentrics or dropouts or tramps. Yet neither is it sentimental about what the father is putting his daughter through. The performances from Foster and McKenzie are wonderful.

Posted by Ficciones at Saturday, December 29, 2018