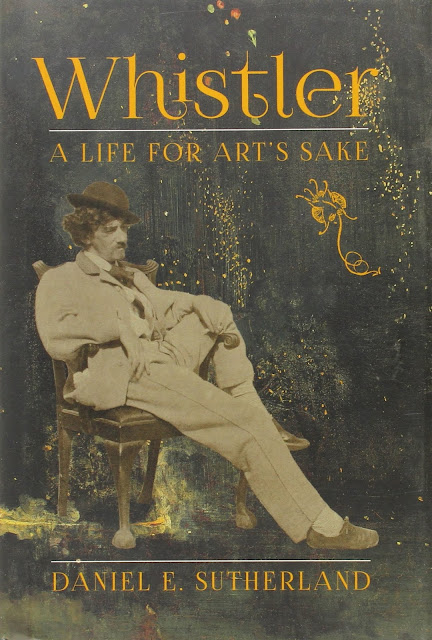 A vain and unpleasant man - but what pictures! Daniel Sutherland is dazzled by Whistler's work, and takes the artist at his own estimation


I
t is one of the great unfairnesses in life that bad people sometimes produce great art. That is certainly true of James Abbott McNeill Whistler, about whom it is hard to think of anything nice to say. Vain, pugnacious, a rotten father and kind to his mother only because he was terrified of her, Whistler is not the sort of man you relish spending 400-plus pages with. But then you look at his Nocturnes – in which the industrial Thames becomes a serene, shimmering mystery – and you realise you could forgive him almost anything.

Living by the mantra of "art for art's sake" meant, in Whistler's case, not withdrawing from the world but hurling himself at it, fists flying. He called his autobiography The Gentle Art of Making Enemies and was careful to follow his own advice. Friends and rivals could reckon on being beaten up by the bantam scrapper, or else find themselves blackballed from their favourite members' club on his say-so. Keeping a beady eye on his paintings' prices, he accused anyone who sold or bought too low of personally picking his pocket. No stunt was too crass if it was good for trade: for his Arrangement in White and Yellow show at the Fine Art Society in 1883, visitors were told to arrive wearing cravats, kerchiefs and buttonholes the colour of egg yolk.
Up close and personal, Whistler was even more tiresome, practising the kind of effortful wit that gave young Oscar Wilde dangerous ideas. On one occasion when he accidently shot his host's dog, Whistler declared: "It was a dog without artistic habits and had placed itself badly in relation to the landscape." This was delivered in a voice that contemporaries described as "caustic nasal", interrupted by a laugh like a peacock's shriek. Then there was his startling streak of white hair, which was not technically his fault, yet still managed to seem like an affectation. Yet despite all this, he was impossible to dismiss. Any writer encountering him found themselves compelled to put him in a book, just to show everyone else what they'd missed. Proust, James, Wells, Du Maurier and WS Gilbert all did their version of the Yankee chancer whose claims of genius teetered between the preposterous and the plausible.
Ah, but then there is the art. After a failed career at West Point military academy – did anyone apart from his widowed mother seriously think he'd make a soldier? – Whistler fetched up in Paris in the mid 1850s and developed a way of seeing that put him at a slant from his British contemporaries. While the pre-Raphaelites were still laboriously rendering each leaf and whisker of a view, Whistler was exploring an art of perception and suggestion. It was his patron Frederick Leyland, "the Liverpool Medici", who first suggested that "Nocturnes" might be the best description of what he was trying to do. His paintings weren't about anything, and aimed neither to tell a story nor teach a lesson. Rather, they used tonal contrasts to evoke mood and feeling, rather like a piece by Chopin. You can see this working best in the Thames pictures, where heavy fogs smudge the outlines of boats, bridges and warehouses – what remains is a harmonious arrangement of bleeding blacky blues and greens.

Famously, not everyone was convinced. For Ruskin, still the leading art critic in the 1870s, Whistler's Nocturne in Black and Gold, an account of the sky above Cremorne Gardens during a fireworks display, was the equivalent of "flinging a pot of paint in the public's face". Here is the beginning of the "my three-year-old could do better than that" plaint against abstract art that is still going strong today. Typically Whistler decided to sue Ruskin and, equally typically, it wasn't the principle of the thing that drove him. What stung the artist was that Ruskin had implied that he was guilty of "cockney impudence" in asking 200 guineas for something that looked as though it had been done by a toddler during a particularly hectic play session. Whistler fancied himself a gentleman – so the cockney slur stung. But more than that, he wanted to uphold the right to set the value of his art. Cheekily he agreed that he had indeed "knocked off" the painting in a couple of days, but the point was that the high fee was for "the knowledge I have gained in the work of a lifetime".
Although the verdict went with Whistler, he got only a farthing in damages and was soon facing bankruptcy. At times like these, "art for art's sake" went out of the window as he threw himself into hackwork to dig himself out of a hole. He put his sublime talent as an etcher to work and published a book of crowd-pleasing views including Old Battersea Bridge and a lithograph of The Toilet, a portrait of his mistress, Maud Franklin. He did illustrations for art catalogues and hurried out portraits of "the heads of blokes" and "their pet ballet dancers".
These jobbing pieces are very different from what Whistler could do when he had only himself to please. The portrait of his mother – properly titledArrangement in Grey and Black No 1 – is so much more than a genre picture of an old lady in a white cap. The subject is not Anna Whistler at all, nor is it Old Age, Wisdom or Regret of any of those other sententious one-worders that the High Victorians liked to affix to their drawing-room art. Rather, it is a commentary on the very business of picture-making. Using a severely restricted palette, Whistler draws attention to the arrangement of large, simplified forms, so that the curves of the model's face, dress and chair are grounded by the rectangles of the curtain, footstool and the floor. If you were given to the sort of grandstanding that Whistler himself went in for, you might claim this as the moment that modernism first peeps through the dusty shutters of representational art.
The great boast of Daniel Sutherland's new biography is that his is the first to have complete access to the artist's letters, the majority of which are held at the University of Glasgow. But letters do not automatically take you closer to someone's core. If there is no core – and Whistler seems to have had a chip of ice where the rest of us have something a bit more pliable – then what letters do is give you information about your subject's surface rather than his depth. Every one of Whistler's communications reads like a little polished mirror, designed to dazzle and deflect the spectator's eye outwards.
You want to weep at the waste of it all – not just the way Whistler squandered his talent on "blokes heads", but also the way that Sutherland fails to acknowledge the challenge of writing a biography when all you have is a series of glittering facades to play with. Instead he takes Whistler at his own estimation (a genius) and repackages the other stuff – the bad faith art, the preening, the viciousness – as the necessary folly of a great man. It is a generous approach but not an illuminating one.
• Kathryn Hughes is writing a book about famous Victorians' body parts.

Posted by Ficciones at Tuesday, September 11, 2018