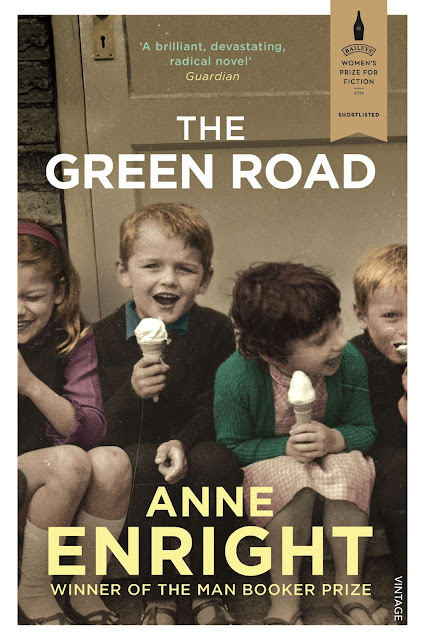 The Green Road by Anne Enright

Booker Prize-winning author of The Gathering, Anne Enright was recently made Ireland’s first Laureate for Fiction. Even in a small country crammed with outstanding authors, no-one quite matches Enright for her quality of writing, her deftness of insight.

Her new novel, The Green Road, shares some similarities with The Gathering, her Booker-winner of 2007. Once again, all members of a large, geographically and lifestyle-diverse Irish family, the Madigans, are united for the first time in many years, this time for a Christmas that may be the last they share in the family home their aging, widowed mother, Rosaleen, has declared her intention to sell. They protest, but this is the new, rich pre-Crash Ireland of 2005, and as one of her four adult children realises, in a crushing moment of insight, “The truth was that the house they were sitting in was worth a ridiculous amount, and the people sitting in it were worth very little.” It’s a classic Enright line: your shoulders tense up with discomfort even as you’re laughing.

But before they are reunited in the unnamed Irish town that was their childhood home, we are given episodes from each of their lives. This masterful section sees Enright breaking new ground. I loved the story of Dan, a conflicted emigré to 1980s New York who can never quite seem to reconcile his sexuality: a girlfriend on one arm, he becomes obsessed with a young gay West Village weightlifter. There’s something rather wonderful in the wise, insightful Enright writing, in her usual stately, unblushing prose, about gay sex in the time of AIDS, and never preachily or judgementally about Dan, who takes the many decades this book spryly covers to finally be able to articulate who he is and what he wants. (This is a book whose surprises are subtle rather than explosive, but I don’t want to spoil them nonetheless.) While you feel there is hope for him and for his brother Emmet, an aid worker, their sister Hanna has spent her life hiding – with varying degrees of success – an alcohol problem that sees her swigging vodka-laced concoctions from a little fruit-juice bottle labelled “Innocent”. In truth, all four siblings and their mother are addicts of one sort or another, and medication and drugs crop up here again and again. In the very first scene of the book, set in 1980, Rosaleen sends young Hanna to her uncle’s pharmacy to pick up Solpadeine and “something for her chest”. In one of the chapters that follows the four siblings as adults, Constance waits in a doctor’s surgery for a scan to determine whether a lump in her breast is cancerous; in another, Emmet is working in Africa to try and save lives imperilled by poor hygiene. And Hanna, of course, is dependent on a kind of self-medication of her own. The links remain subtle, but the implication is clear: these are four individuals trying and failing to help themselves and others in order to compensate for something missing – stolen – from their own lives.

Since she first emerged in the mid-1990s, the quirks that once distinguished Enright’s fiction (her first books, The Portable Virgin and The Wig My Father Wore, were issued with jolly artwork appropriately attuned to those faintly glib titles) have largely fallen away over the years. What remains is work that is marvellously controlled and beautifully written, that wrestles with the world, and in which she achieves time and again – notably in The Gathering and its followup The Forgotten Waltz which, with the present book, form a sort of triptych of 21st century Ireland’s triumphs and woes – that wonderful feat of capturing some universal feeling that surely every reader has had yet never been able to articulate: Enright does it for you, with warmth, precision, empathy. But while The Green Road demonstrates that she’s lost none of this power, there is a certain downbeat tone to it, a dour quality. This might seem inevitable in a book about the decline of a matriarch and the various dissatisfactions of her offspring, but it seems more than just mimetic of its characters’ troubles. Perhaps because the four siblings are only brought together late on in the book, there is only a little of the sniping humour you might expect from this kind of gathering; old alliances and enmities resurface in this reunion, but it doesn’t generate much laughter in the dark.

Oddly, the mother never quite came to life for me; a tyrant who scolds the children she relies on so much, Rosaleen is better viewed, refracted, through her children’s stories. Letting us see her full-on, as it were, Enright removes some of her symbolic power. It couldn’t be done any other way; the climax of the book, in which Rosaleen sets out on the titular road and is promptly reported missing, is told from the perspective of the weakened tyrant – her name recalls that other maddened, wearying family despot, Lear – as well as those of her offspring who, damaged and dismayed by her behaviour, still (of course) rush to her aid. They can do nothing else. Elderly she may be, but you don’t have the sense that this is a woman who will ever die, nor that these four now middle-aged children – damaged perhaps irreparably – will ever escape her shadow, despite intriguing hints in Emmet’s story, particularly, that some changes and transformations can take an astoundingly long time to reveal themselves. We know much more about the Madigans by the close of this powerful, memorable, moving novel, yet each member of the family remains mysterious, bristling with contradictions – in other words, lifelike.