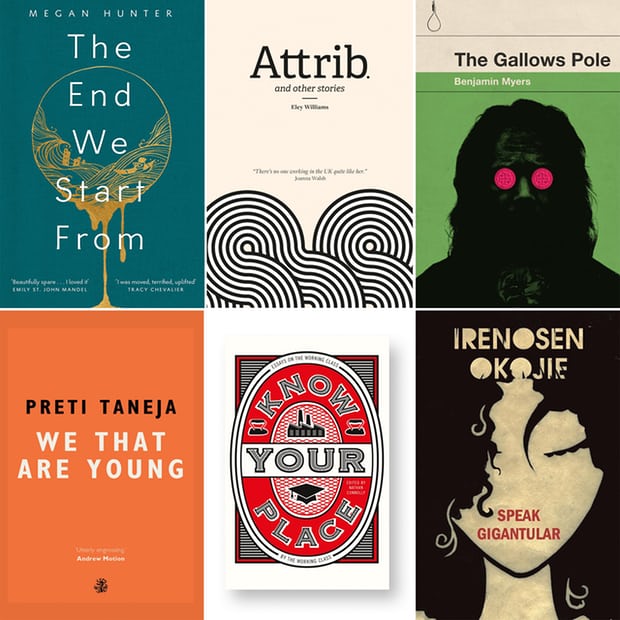 Best books of 2017: indie publishers on their favourite books of the year


India’s answer to Lear, a teen tale set amid the London riots and the first great book on grime. Experts pick 2017’s smartest, oddest and most overlooked reads


The book that made my year: We spoke last year about Mike McCormack’s wonderful Solar Bones, which garnered rave reviews and a rake of prizes including the Goldsmiths and two BGE Irish Book Awards. We suspected it was only gathering speed – and we were so delighted when it was longlisted for the 2017 Man Booker (thanks to Canongate publishing their gorgeous edition). And Sara Baume’s wondrous A Line Made By Walking helped make 2017 a brilliant year.

Our book that deserved to do better: Our Recovered Voices series is how we republish lost classics: this year we followed up our very successful haunted house story, The Uninvited, with The Unforeseen, also by Dorothy Macardle. Set in Wicklow just before the second world war, it’s an eerie and gorgeously written tale.

I wish I’d published: The End We Start From by Megan Hunter (Picador) is all my favourites – short, sharp, apocalyptic and beautiful.


The book that made my year: When We Speak of Nothing by Olumide Popoola. We’re really proud of this one. Set in King’s Cross and Port Harcourt, it is the coming-of-age story about two black adolescents and their friendship. The novel taps into issues of queer identity and social divides at the time of the 2011 London riots. Olumide captures a voice of black British youth that has been almost entirely absent from literary fiction.
Our book that deserved to do better: The Hidden Star by K Sello Duiker. Published posthumously, this magical YA quest is set in South Africa. We had a good deal of success with it in Africa, but I feel it was overlooked by UK reviewers.
I wish I’d published: Irenosen Okojie’s Speak Gigantular (Jacaranda Books) is an eclectic, disturbing and erotically charged short story collection by a scorching talent. And Diana Evans’s Ordinary People (Chatto & Windus) – brilliant.


The book that made my year: We That Are Young by Preti Taneja. A translation of King Lear into a contemporary Indian setting, We That Are Young is a devastating novel; we’ve been overwhelmed by the fantastic reviews and reader reactions.


Our book that deserved to do better: We Are the End by Gonzalo Garcia is a wonderful book about a messed-up young man called Tomas, who (like all of us) gets things wrong. He isn’t much of a hero, though, and that’s proved tricky. It has really touched some readers – but I worry others judged the protagonist rather than the book about him, and maybe missed its humour and sadness.
I wish I’d published: Man With a Seagull on His Head by Harriet Paige (Bluemoose) – I fell in love with it.


The book that made my year: It was a real thrill to work on Client Earth, an uplifting and deeply pragmatic look at how a new generation of legal activists are defending the environment. Satisfyingly, the book’s release coincided with coauthor James Thornton’s legal triumph over the UK government on air pollution.
Our book that deserved to do better: 1947: When Now Begins by Elisabeth Åsbrink is a work of narrative nonfiction that reads like poetry. Although it has received a share of acclaim already, it deserves to be a bona fide bestseller.

I wish I’d published: I was electrified by The Adversary, by French writer Emmanuel Carrère. Reissued by Vintage this summer, it’s a true-crime account of an infamous con man, but the intensity and self-scrutiny of Carrère’s writing turns it into a disconcerting and unputdownable moral thriller.


The book that made my year: Ties by Domenico Starnone is a powerful short novel about relationships, family, love and the ineluctable consequences of our actions. Lucidly rendered into English by Jhumpa Lahiri, it was selected by the Sunday Times as best novel in translation of 2017.
Our book that deserved to do better: The Gringo Champion by Mexican author Aura Xilonen is a contemporary take on the picaresque novel and a literary antidote to the growing xenophobia of our times.
I wish I’d published: Broken River by J Robert Lennon (Serpent’s Tail): genre-defying, deeply unsettling and wickedly suspenseful.


The book that made my year: Leone Ross’s sparky and transgressive short story collection, Come Let Us Sing Anyway, has gathered some very admiring reviews and sold respectably. The other book that made my year – it’s only just out – is Jacob Ross’s collected stories, Tell No One About This. Heart-breaking, radical in its social insights and finely honed.
Our book that deserved to do better: Jennifer Rahim’s Curfew Chronicleshasn’t yet been recognised outside Trinidad for the brilliantly inventive way it builds short narratives into a kind of mini-Ulysses, taking place over 24 hours in Trinidad during a state of emergency.
I wish I’d published: Lorna Goodison’s Collected Poems (Carcanet). A Caribbean and international great.


The book that made my year: Compass by Mathias Énard (translated by Charlotte Mandell) is a brilliant novel, a fictionalised history of orientalism told by an insomniac musicologist in Vienna. It has been fun to watch Énard’s reputation grow in the anglophone world. In 2018 we’ll publish a fourth novel in English, on the possibly apocryphal story of Michelangelo designing a bridge over the Bosphorus.
Our book that deserved to do better: This Little Art by Kate Briggs, a genre-bending song for the practice of translation, has had a lot of recognition in translation circles – but I’m longing for it to find a wider audience. Lydia Davis called it “highly enjoyable” – what more do you need?
I wish I’d published: Ferocity by Nicola Lagioia (translated by Anthony Shugaar, Europa Editions), a Lynchian noir set in southern Italy.


The book that made my year: Without a doubt, Know Your Place: Essays on the Working Class By the Working Class. After raising £10k on Kickstarter, this collection has gone on to be our bestselling book ever. The important conversations it has started about being working class in Britain today are vital.
Our book that deserved to do better: Not that it hasn’t done well, but Naomi Booth’s Sealed is a book that everyone should be reading. An expertly crafted eco-horror that is so beautifully written that it should be sold as poetry. No book has summed up our precarious position in the world so well for me.
I wish I’d published: The Gallows Pole by Benjamin Myers. Within this book there is something beyond truth: a mythology of England’s North.


The book that made my year: Prabda Yoon’s The Sad Part Was – a witty, touching, whip-smart story collection by an author who has been a household name in Thailand for over a decade yet had never had anything in English; in fact, this is the first contemporary Thai fiction published in the UK. It was also Mui Poopoksakul’s first book-length translation – she did such a superb job.
Our book that deserved to do better: We were expecting a lot from Abandon, the second novel from “India’s Ferrante” Sangeeta Bandyopadhyay, translated by Arunava Sinha. We were all set for a big UK tour, but Sangeeta couldn’t get a visa. This happens to far too many writers.
I wish I’d published: I read the Singaporean edition of Unrest by Yeng Pway Ngon, translated from the Chinese by Jeremy Tiang, and loved it, but it had already been snapped up for UK publication by Balestier Press. It’s a wonderful novel.


The book that made my year: The Gallows Pole by Benjamin Myers is about a popular uprising against the establishment in the 18th century that has many links with our current political climate. Joanne Harris and Robert Macfarlane chose it as one of their books of the year.
Our book that deserved to do better: Man With a Seagull on His Head by Harriet Paige was runner-up in the Guardian’s Not the Booker prize. It is already being compared to early Ishiguro and McEwan by the US publisher we have just sold rights to.
I wish I’d published: Know Your Place, edited by Nathan Connolly (Dead Ink): 24 essays on the working class by working class writers. Every publisher, editor and agent must read this if the industry is really interested in challenging inequality.

Publisher, And Other Stories


The book that made my year: Yuri Herrera’s Kingdom Cons, translated with such verve by Lisa Dillman. It’s about a singer in the court of the King, a Mexican gang lord, but really it’s a fable about any artist working in a system of patronage: how to make a living and be truthful. It has been a joy to see it receive the acclaim it deserves.
Our book that deserved to do better: Patty Yumi Cottrell’s novel Sorry to Disrupt the Peace had some high praise, but we thought more people should read it. It’s rare to find such a pleasurable, intelligent book.
I wish I’d published: Han Yujoo’s The Impossible Fairytale, translated by Janet Hong, was a novel I tried to publish but lost out on. It is great.


The book that made my year: Attrib. and Other Stories. When we asked Eley Williams to write this book we knew it would be brilliant, but we had no idea quite how brilliant. It’s a masterpiece. We’re really happy that so many people have felt the same.
Our book that deserved to do better: In terms of publicity and media coverage, Hold Tight by Jeffrey Boakye. This is one of the first major books about grime music and its culture. The music press were brilliant in picking it up and shouting about it, but in general, arts and book editors ignored it. They missed an opportunity to reach a young, engaged audience and open up their readership.
I wish I’d published: Know Your Place (Dead Ink) is excellent.
THE GUARDIAN

Posted by Ficciones at Thursday, September 20, 2018