To The Friend Who Did Not Save My Life- Hervé Guibert

“My blood, unmasked, everywhere and forever, naked around the clock, when I’m walking in the street, taking public transport, the constant target of an arrow aimed at me wherever I go. Does it show in my eyes?”– Hervé Guibert, To The Friend Who Did Not Save My Life 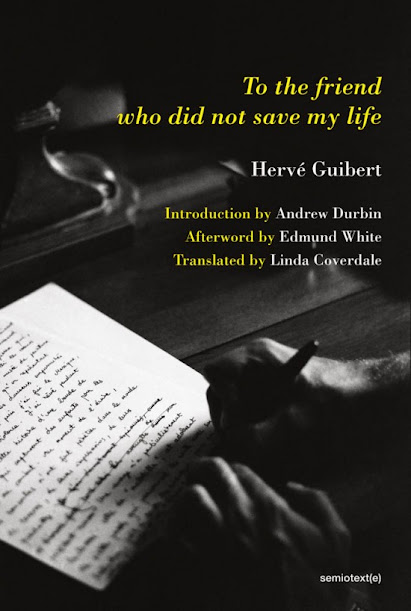 This was a tough review for me to write especially having  lost a relative to AIDS as a teenager, a relative who lived at my parent’s house until a few days before he died. Having witnessed the painful death of a loved one to this disease , it surprised me that I’d even consider picking this book up. Well, morbid curiosity got a hold of me really after I watched a documentary  on Foucault in which there was mention of a friend of his documented  his final months before succumbing to  AIDS. This friend is Hervé Guibert and this story is both a fictionalized account of Foucault’s death and Guibert’s own experiences with the disease.

This book takes us back to the dark days of the 1980s when HIV/AIDS was a relatively new disease on the horizon and was downright terrifying. It makes you feel a lot of compassion for the gay community must have felt  frightened when it looked like this disease was only affecting them. It takes you into the world of pseudoscience and medical quackery when doctors just had no idea how to cure the disease.

I found myself very much affected by this book. It definitely had a lot to do with my personal experiences but it was more than that. Being a healthy person the book made me realize how everything changes when you get seriously ill. Relationships change, your body changes, your goals may change, the way you look at life as well. How would we live if we were given such a death sentence? How can you live knowing your body isn’t yours anymore?

“For though it was certainly an inexorable illness, it wasn’t immediately catastrophic, it was an illness in stages, a very long flight of steps that led assuredly to death, but whose every step represented a unique apprenticeship.”

It’s amazing how a book filled with such sadness could be so lyrical but this book really was. This book is such a naked exposure of Guibert’s self, his fears, vulnerability, despair and so on.  I really felt like I was intruding. There were some explicit scenes of course, and it was brutal at times.

Not an easy read because of the subject matter but one that I’d recommend. The story will stay with you.