A Death in the Family by Karl Ove Knausgaard / Review 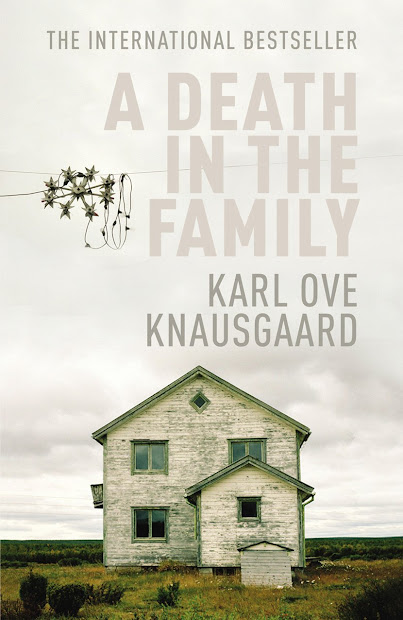 A Death in the Family by Karl Ove Knausgaard – review

A national obsession in Norway, this autobiographical epic is somewhat indigestible

he corpse in A Death in the Family belongs to the author's father, and this book – marketed as fiction, but obviously memoir – is the first instalment of a six-volume fictionalised autobiography that has been phenomenally successful in Norway. The series has been bought by almost half a million of the country's five million inhabitants, necessitating some workplaces to declare "Knausgaard-free days" on which employees were cajoled to talk about something else.

For an author who, by his own admission, was not satisfied with modest sales, literary prizes, good reviews and the domesticities of marriage, this explosion of fame was the Faustian fulfilment of a dream. "I wanted so much to be someone. I wanted so much to be special," he says of his boyhood self. The young Karl Ove writes rubbish goth poetry, plays in a rubbish rock band and dresses like the Edge of U2, determined to break free of his father's oppressive influence. He's convinced he's bound for greatness, yet, by the age of 40, finds himself bogged down in the messy compromises of middle-class parenthood. Only when he gives himself permission to exorcise his familial discontents in print does he feel he's finally writing "something exceptional".

In interviews, Knausgaard claims that he strove for years to write about his father, unsuccessfully, until he decided to just "tell it as it was". The elaborate artifice that characterised his previous book (published here as A Time to Every Purpose Under Heaven) was abandoned. "I gave up all ambition, I didn't try to be clever or anything: I just tried to write as fast as I could." Banging out 10 to 20 pages a day, Knausgaard eventually produced 3,500.

A Death in the Family begins with a grand meditation on post-mortem microbes worthy of Jim Crace's Being Dead, and ends impressively too, with a profoundly resonant last line. In between, in a Proustian spirit of digression, there are philosophical pensées of varying interest, as well as vivid evocations of adolescent hypersensitivity and confusion. The bulk of the text, however, consists of mundane family life described in microscopic detail. All the dull stuff that most novelists would omit, Knausgaard leaves in.I've consulted Norwegian friends about the translation, and I'd guess that most of the infelicities in the text are due to Knausgaard's hurried workrate rather than to Don Bartlett's inadequate skill. Convoluted verbiage such as "In addition, an equally hitherto unsuspected vulnerability surfaced" is a faithful rendition of the original, as are many of the hackneyed phrases (hungry as a wolf, two sides of the same coin, like sand through my fingers, and so on). There is little a translator can do about Knausgaard's often wilfully banal style.

Half the book's bulk seems devoted to activities such as lighting cigarettes, drinking beer, going to the newsagents, making small talk. "I unscrewed the lid of the coffee tin, put two spoonfuls in my cup and poured in the water, which rose up the sides, black and steaming, then I got dressed." Eleven lines are spent on a fly buzzing in the window, half a dozen on the mechanics of rolling a fag ("licked the glue, removed any shreds of tobacco, dropped them in the pouch…"). This merciless specificity, which some readers may find maddening, serves two purposes. It lends an air of unedited truth to the project, and it adds power to the final third of the book, where Karl Ove and his brother Yngve are saddled with the grim job of cleaning the house in which their father drank himself to death.

The shit-encrusted couch, the gunge on the shower-screen, the mounds of soiled clothing, the dried-up bits of old soap, the desiccated creams and ointments, the endless bottles of booze – they're all here, and more, much more. The two brothers spend a week doing what they can with Jif and Klorin and yellow rubber gloves, and by the end of that week, you feel you've laboured with them. Fans of Raymond Carver may object that there are other, more concise ways to convey the father's degradation, but Knausgaard's method is undeniably effective.

But what of the father's surviving relatives? And what of Knausgaard's mother, his brother, his wife and ex-wife, the teenage girlfriend he divested of knickers and ejaculated against despite not particularly liking her? How might these people react to being grist for Knausgaard's literary mill? The title of the whole series in Norwegian – Min Kamp ("My Struggle"), deliberately echoing Hitler's autobiography – is indicative of the self-absorption that allowed Knausgaard to write it in the first place and to profess surprise at the amount of hurt it caused.

The second instalment (to be issued in translation next year) dissects Knausgaard's failed first marriage, to a woman called Tonje who has since aired her side of the story in the media. A Death in the Family was tabloid news, too: the unflinching descriptions of the senile, rancid grandmother, leaking piss while wheedling for vodka, provoked Knausgaard's uncle to threaten a law suit. Virtually every "character" who appears in Min Kamp has been interviewed by the Norwegian press. The British media is unlikely to offer such copious amounts of Knausgaard fuel, but the response here so far suggests that plenty of readers will feel compelled to voice their opinions on the rights and wrongs of his enterprise.

Of course, Knausgaard is by no means the first author to stir this controversy. It's just that history has a way of biodegrading media fuss, so that each new furore seems unprecedented. When Hanif Kureishi writes an autobiographical novel, his family accuse him of spiteful fabrications. John Bayley's memoirs of his life with Iris Murdoch were criticised for their focus on such taboo subjects as her toilet habits. Two years ago, Julie Myerson's account of life with her drug-addicted son was widely felt to have sacrificed sacred privacies on the altar of authorial ambition. Back in February, Rachel Cusk's literary moanfest about her separation sparked debate about the same thing. And so on.

Gossip is as forgetful as it is virulent. The real question about Knausgaard's work is not whether, in the coming months, you will find yourself discussing it with friends and workmates – you probably will. The real question is whether anyone will be reading it in 20 years' time. On the evidence of A Death in the Family, I suspect that Knausgaard's lifelong yearning to achieve literary immortality may prove biodegradable too.

• Michel Faber's The Fire Gospel is published by Canongate.