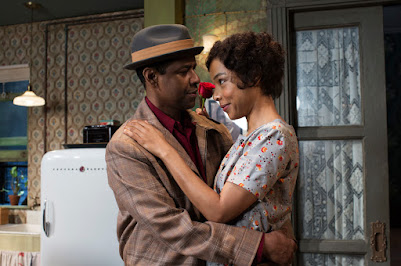 ifty-five years after its Broadway premiere – the first for a play by an African-American woman – A Raisin in the Sun has returned to the Ethel Barrymore theatre. One way to watch this star-powered revival with Denzel Washington and Sophie Okonedo is to measure the distance from 1959, when Lorraine Hansberry's stately play forecast the profound social transformations to come from America's burgeoning civil rights movement. Acknowledging this history, director Kenny Leon prefaces the evening with a short audio clip in which Hansberry speaks of the need for a theatre that can illuminate the nation. 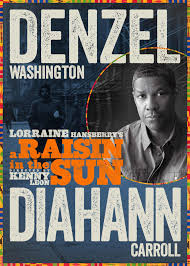 A Raisin in the Sun certainly fulfills that mandate, with its bracing story of WalterYounger's hope-hungry family on Chicago's South Side. Yes, the drama creaks in places, and overwrought characters speak in lyrical crescendos found only in plays of the era. But this compelling version of a repertory staple shows how clearly Hansberry can still call to us across the years. A black president may occupy the White House today, but plenty of Walter Youngers remain foreclosed in their dream houses.

The evening'sostensible star, Denzel Washington, has a tricky task playing Walter, the chauffeur whose visions of business success collide with a reality often rigged against black men. Unlike many Hollywood headliners, Washington has authentic stage charisma; here, though,he has been cast in a much younger man's role. It can be incongruous to hear a Walter who looks wizened by age talking about the life he's planning to build. Perhaps to compensate, Washington bristles with ebullience and eagerness; it's hard to detect smoldering rage even when he talks about it. "I'm a volcano," Walter declares, and a visitor later complains that Walter's "all whacked up with bitterness". Those qualities don't erupt until the final scene, however, when Washington finally goes full-throttle.

The cast is generally excellent, with taut performances of varying depths. As a result, we see that Hansberry created a whole family of protagonists: it's no longer Walter's play alone. Sophie Okonedo, as his distressed wife, Ruth, becomes the drama's mournful foundation. As the free-thinking sister Beneatha, Anika Noni Rose radiates the youthful desires that defined the next decade's rebellions. When her mother (LaTanya Richardson Jackson) shakes her head and asks, "What is it that's changing?" we realise that Hansberry captured an era's generational divide as well as a nation's racial struggle. Remounted in the spot where it made theatre history, her play continues to illuminate.

• Did you catch this show – or any other recently? Tell us about it using #gdnreview