Sophie Okonedo on Broadway / 'We try out different things every night' 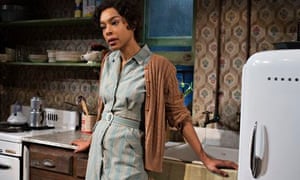 'I need the iron to be real and hot' ... Sophie Okonedo in A Raisin in the Sun

Sophie Okonedo on Broadway: 'We try out different things every night'

In A Raisin in the Sun, her New York theatre debut, the Hotel Rwanda star likes to keep Denzel Washington guessing – neither of them knows what the other will do next, she says

When Sophie Okonedo learned that the director Kenny Leon had cast her in the Broadway revival of Lorraine Hansberry's A Raisin in the Sun, she commenced a series of high kicks.

Hansberry's play, about an African-American clan crowded into a cramped apartment on Chicago's South Side, was named after a line in the Langston Hughes poem Dream Deferred; when we speak a few days after the show's triumphant opening, Okonedo describes her Broadway debut as a "dream come true".

Before the revival's producers contacted her, Okonedo, who was born in London to a Nigerian father and a Jewish mother, had never seen or read Hansberry's play. Hansberry, who died of cancer in 1965 at the age of 34, became the first female African-American playwright to have a work on Broadway when A Raisin in the Sun opened in 1959, with Sidney Poitier and Ruby Dee in the main roles.

Okonedo bought a copy of the play and discovered a masterpiece. She says that Hansberry – whose work inspired the song To Be Young, Gifted and Black – "knew so much about the human spirit – men, women, relationships, getting older, living in the world when you don't have much". She also says that she finds the play particularly relevant now, when "the gap between the rich and the poor is bigger than ever. That grips me."

In the play, a life insurance cheque offers the Younger family the promise of a new home, which might be scuppered by the competing ambitions of son Walter Lee, who would prefer use the money to open a liquor store.

Denzel Washington, in his first Broadway role since August Wilson's Fences in 2010, plays Walter Lee. Okonedo is Ruth, his harried wife, a woman drained by the pressures of working as a cleaner while caring for her unhappy husband and son. "Life can be a barrel of disappointments, sometimes," says Ruth.

In Okonedo's sardonic, loving, performance, you feel it. You can see Ruth's weariness in the carriage of Okonedo's shoulders, the set of her mouth. Leon praises the depth: "She embraces every part of the character," he comments. "The ugly and the pretty, the darkness and the light."To find her way into Ruth, Okonedo worked with a dialect coach for weeks so that she could arrive on the first day of rehearsal with a faultless Chicago accent. (This hasn't prevented LaTanya Richardson Jackson, who plays the clan's matriarch, from nicknaming Okonedo "British".) She chose to focus her energies on Ruth's strength rather than her fatigue. "She's quite tough, quite robust," says Okonedo. "She couldn't be falling apart every second. She'd have to be trying to keep it together."

Okonedo also worked to understand Ruth's reality, researching the legacy of slavery in America and pushing director Leon towards more stage realism. Leon recalls that on the first day of rehearsal she said, "I need the iron to be real and hot, I need real running water on stage."  Leon told her that if she worked toward "a great, honest Ruth … I will give you everything that you need".

Despite an impressive array of film and television performances including Hotel Rwanda (2004) and The Slap (2010), and London stage roles at the Royal Court, the RSC and the National Theatre, Okonedo says she felt somewhat shy at the beginning of the rehearsals for A Raisin in the Sun, owing to Washington's presence in the room. "You try to behave normally but you're aware that he's famous and it's a bit awkward," she recalls. But she and Washington developed a rich, volatile stage chemistry. "We're similar in that we like to try out different things all the time, every night," she says. "I never know quite what he's going to do and he never knows quite what I'm going to do." But she is reticent when asked to describe the scene in which Ruth and Walter Lee kiss, an embrace that moved some women in the audience to envious sighing.

Okonedo marks that audience – voluble, responsive – as one of the signal differences between Broadway and the West End. She marvels, too, at the number of previews Broadway productions enjoy, which allowed the cast to "change things quite radically" during the initial weeks. She also enthuses about a Broadway tradition "where on opening night all the other casts from all the other plays on Broadway send you cards to wish you luck. I find it very touching."

The theatrical community, the receptive audiences, the generous actors, the neon-lit streets of Times Square have all made her eager to work on Broadway again, even as she voices regret that similar opportunities don't wait for her in the UK, particularly when it comes to television and film. "Half the stuff there is costume drama," she explains. And even though she has occasionally appeared in such series, as when she played Nancy in Oliver Twist, most producers won't think of casting a mixed-race actor in such roles. "That's very limiting," she says.

"I just get offered a lot more work in America than I do in Britain. I may be here now," she says. "There are just more roles for me in America. Sadly. Because I love working in Britain. It's my home."