Kate Moss, supermodel as phenomenon, sees the millions pour in

Kate Moss, supermodel as phenomenon, sees the millions pour in

With her two companies reporting record earnings, passing 40 has opened the door into a new and growing market
BY DAMIE DOWARD AND TESS REIDY
The Observer, Sundady 10 August 2014 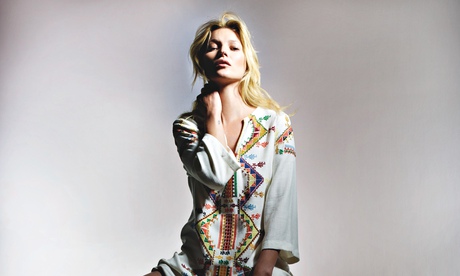 Modelling for Topshop: 'she has an enduring agelessness and ability to be a really successful canvas’.
There are models, there are supermodels … and there is Kate Moss. Turning 40 has only boosted her earning power, according to accounts filed last week by her two companies. They show she has defied a whiff of scandal and predictions of decline, reflecting a revolution in how the fashion industry is responding to women consumers, say commentators.
Accounts for her main company, Tilly Church Ltd, show that last year it had more than £9m in the bank and was owed a further £5m. A second company, Skate LLP, was sitting on more than £5m in the bank last year – and was owed a further £1m.
In total it means the two companies had £20m in cash, much of it in the bank and some owed to them, compared with about £17m in 2012, the year she appeared with several other supermodels celebrating British fashion at the closing ceremony of the London Olympics. The event, watched by billions around the globe, helped to confirm Moss, who hit 40 in January, as one of the most recognisable people on the planet and cemented her brand.
In the same year, Forbes placed her second on its top-earning models list, with an estimated $9.2m. Once money owed to creditors is factored in, last year Moss's two companies had net assets of £16.7m. And, while their accounts make it difficult to separate how much of her wealth was earned and how much was accrued from investments and interest, they suggest 2013 might turn out to be her most lucrative year to date.
"The fact that she's doing so well is testament to her enduring agelessness and ability to be a really successful canvas, but also she is perfectly placed to reflect the growing market of 40-plus women who have money to spend in fashion and beauty," said fashion commentator Caryn Franklin. "At last companies are waking up to this. There used to be a definite cut-off point in modelling but that's changing, and I hope the careers of other 40-plus models will start to take off. Ultimately, it's female consumers who will lead the trend by responding to more realistic role models in terms of age and where they choose to buy their produce. It's the power of the purse."
Ger Tierney, executive fashion editor of i-D Magazine, said Moss's longevity was also partly down to a reaction against "the increasingly short lifespan of models' careers that has become a depressing norm.
"Women want to connect with a character, they want a strong woman and no longer buy into the next long-limbed schoolgirl to turn up bright-eyed and bushy-tailed at fashion week. It's easy to connect with Kate because we've grown up watching her career, her personal life, her high and her lows. She has become humanised over the years and is more marketable than ever."
Moss has contracts with a range of brands including Matchless, Rimmel and Topshop, for whom she is a designer. There have been questions about whether her second collection for the high-street chain, launched earlier this year, has been a total success.
Topshop entrepreneur Sir Philip Green dismissed suggestions that some items in her latest collection had not sold well after they ended up in the sales: "The range was very, very successful and we waited until the end of the season to clear whatever was left. There's nothing untoward, whether it's got Kate Moss in it, or any other brand; what we've got left at the end of the season around the globe, we sell. Nothing sells 100%, whatever it is – it doesn't exist in any business."
Moss's sustained earning power is all the more remarkable given that some commentators wrote her off almost a decade ago. In 2005, following her short-lived relationship with singer Pete Doherty, she found herself immersed in allegations of drug-taking. Although she was never charged, a number of major brands dropped her from their campaigns.
"People said that would end her career," said Ellis Cashmore, professor of culture, media and sport at Staffordshire University and author of Celebrity Culture. "But in fact the opposite happened. She came back with renewed vigour. Scandal can be a valuable resource."
Cashmore drew comparisons between Moss and David Beckham: "Beckham is a prodigious endorser, too. And both now have their own imprimatur. There are not too many people who can draw the crowds by saying almost nothing and just turning up. She is a brand in her own right."
Approaching 40 does not appear to have dimmed Moss's appetite for exposure. Last December she appeared in the 60th-anniversary issue of Playboy magazine. In the same month, she was honoured at the British fashion awards acknowledging her contribution to the industry during a career spanning a quarter of a century.
Cashmore suggested Moss was riding a wave that started a couple of decades ago when companies looked beyond Hollywood stars to find people to endorse their brands: "A clutch of supermodels who emerged in the early 90s benefited from this trend, people like Naomi Campbell and Cindy Crawford. Moss is their younger sister. She belongs to the second generation of supermodels and is a phenomenon."

LIFE IN THE LIMELIGHT

1988 Talent spotted at JFK airport, New York, at age of 14.
1990 Appears in the Face.
1993 Fronts Calvin Klein campaign.
1999 Appears with other supermodels on the millennium cover of American Vogue.
2002 Gives birth to daughter, Lila Grace
2005 Goes out with Pete Doherty. Allegations of drug-taking see brands including H&M desert her. Moss issues apology but never admits to taking drugs.
2006 Wins model of the year.
2007 Time magazine names her one of the most influential people in the world.
2011 Marries musician Jamie Hince.
2013 Poses for Playboy.