Sherwood Anderson / A brief survey of the short story

A brief survey of the short story part 51:

In his story cycle Winesburg, Ohio, midwest maestro Sherwood Anderson lavishes love on a collection of grotesques whose lives have been distorted by an inability to communicate

Chris Power
Wednesday 24 July 2013 16.15 BST
Certain locations belong to certain writers. Kafka stalks the streets of Prague; Fitzrovia pubs call Julian MacLaren-Ross to mind; Dublin, to the understandable frustration of its other writers, is Joyce. When I lived in the flat expanses of the American midwest I would drive through mile after mile of cornfields, a landscape that always made me think of Sherwood Anderson and his collection Winesburg, Ohio.
Even as Anderson's once-great reputation plummeted, the book, published in 1919, continued to exert a pronounced effect on the American short story throughout the 20th century. His prose carries flavours of Whitman and Twain, and the distinctive, comma-rejecting rhythm of Gertrude Stein. Above them you detect those he influenced: the Hemingway of In Our Time, William Faulkner, Eudora Welty and Raymond Carver among many others. Sometimes he writes very badly, but when he writes well his discursive style envelops you completely, without fanfare.
Winesburg, Ohio is a story cycle set in a small town in the 1890s. Each story concentrates on a different "grotesque" who inhabits the town, people whose lives have become distorted through an inability to communicate. For Anderson these "grotesques" are not monsters to be feared, but creatures to be pitied and loved. Many of them feel compelled to explain themselves in some way to a young man called George Willard, the closest thing the book has to a hero. George matures over the course of the collection, and in the final story leaves Winesburg behind. The effect of the book is to cumulatively produce an atmosphere of uncomfortable but compelling intimacy. Throughout, hands appear as symbols of the desirability and difficulty of human contact, and it was hands that Edward Wilson Jr used to precisely describe the feeling of reading it: "We are at once disturbed and soothed by the feeling of hands thrust down among the deepest bowels of life – hands delicate but still pitiless in their exploration." 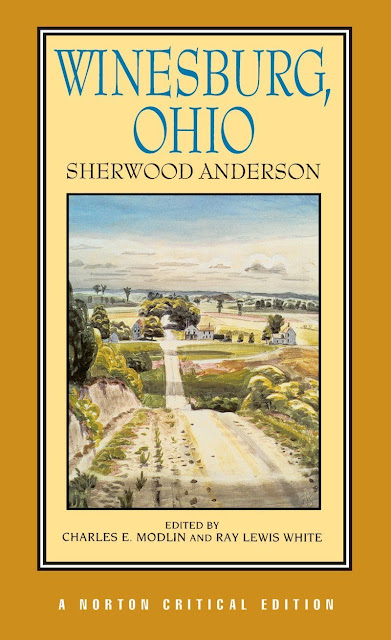 Anderson's grotesques speak to walls, embrace pillows, and shout their private thoughts to empty cornfields. George Willard's mother "wanted to cry out with joy because of the words that had come from the lips of her son, but the expression of joy had become impossible to her". Alice Hindman kneels beside her bed and "in her prayers whispered things she wanted to say to her lover". Desperate at the thought of dying alone, she runs into the street and offers herself to the first man she meets. But the man fate delivers is elderly and deaf, and she collapses at his feet in shame. The scene, Beckettian in its bleakness, is also indicative of the book's sexual charge. As John Updike wrote, "There are more naked women in Winesburg than one might think."
Winesburg's freight of loneliness is so great that it seems more symbolist than realist. Christopher Benfey was only half joking when he called it the "Purgatorio" in a midwestern trilogy beginning with Edgar Lee Masters's Spoon River Anthology (1915) and ending with Sinclair Lewis's Main Street (1920). Anderson's realism is a highly unorthodox one that often slips into myth, a quality transmitted directly into the work of Eudora Welty. His small American town exists in a perpetual twilight where men and women, beset with loneliness, wander the streets hungry for connection. Their stories have been described as possessing an "aura of charged stillness", a term that could also be applied to the quietly bleak paintings of Edward Hopper. But there's something of Giorgio de Chirico's eerily unpeopled precincts here, too, where reality flickers into something else then back again:

The garden that had been so mysterious and vast, a place that with Seth beside her might have become the background for strange and wonderful adventures, now seemed no more than an ordinary Winesburg back yard, quite limited and definite in its outlines.
This transformative capability of life drives The Man Who Became a Woman (1923). A feverish story, on one of its numerous levels, of repressed homosexuality, it concerns a young groom who one night hallucinates that he has become a woman. Two other grooms attempt to rape him, but he flees naked into an abandoned slaughterhouse yard where he undergoes a traumatic burial and rebirth in the skeleton of a horse. This rich, astonishing story, which resists a single interpretation and is more ambitious than anything in Winesburg, lands somewhere between Huckleberry Finn and Ovid.
But Anderson's best story, the one that Irving Howe believed "most deserves to be placed among the great stories of the world", is The Egg (1920). Here the twin themes of universal human loneliness and the souring of the American dream combine to bleak, funny and moving effect. The narrator tells us his father was happy when he had "no notion of trying to rise in the world", but marriage and general American competitiveness get to work on him, and impel him towards a series of failures. First comes the chicken farm:
One unversed in such matters can have no notion of the many and tragic things that can happen to a chicken. It is born out of an egg, lives for a few weeks as a tiny fluffy thing such as you will see pictured on Easter cards, then becomes hideously naked, eats quantities of corn and meal bought by the sweat of your father's brow, gets diseases called pip, cholera, and other names, stands looking with stupid eyes at the sun, becomes sick and dies.
This miserable cycle of despair and failure is epitomised by the egg, and it is an egg the father later uses in a farcical attempt to entertain a customer in the failing diner he has opened beside an isolated railway station. Railing against his ruined ambitions, the father hurls eggs at the customer and comes upstairs to where his wife and son are cowering. He has an egg in his hand and, his son thinks, "he had some idea of destroying it, of destroying all eggs, and that he intended to let mother and me see him begin". But instead he collapses in tears, and the boy watches his mother stroke his father's bald head.
It is a tender moment unlike anything else in Anderson's work, but later, in the darkness, when the boy hears his parents having sex, we are reminded of the earlier line that "hens lay eggs out of which come other chickens and the dreadful cycle is thus made complete". Yet it is possible to suppose that the father's failure has provided the boy with the impetus to prosper. In an unusual moment, the boy sees the bald stripe across his father's head as "a broad road, such a road as Caesar might have made on which to lead his legions out of Rome and into the wonders of an unknown world", and it is possible to believe that the narrator's route to freedom lies via the demonstrative mistakes of the father. This is one of those rare stories that once read continues to grow in the memory, and with each reading produces new meaning.
Anderson wrote the vast majority of his good work between 1916 and 1926, and most of his readers had abandoned him years before his unfortunate death in 1941 (he developed peritonitis after swallowing a cocktail stick). But regardless of his inconsistencies and his long decline, stories such as I Want to Know Why (1919), I'm a Fool (1922) and the problematic but brilliant Death in the Woods (1933) demand to be read by any lover of the form. There's plenty to explore beyond Winesburg's city limits.