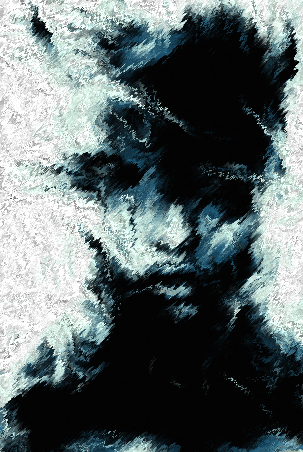 ARRANGEMENT IN BLACK AND WHITE
By Dorothy Parker

The woman with the pink velvet poppies twined round the assisted gold ofher hair traversed the crowded room at an interesting gait combining a skipwith a sidle, and clutched the lean arm of her host.

"Oh, I'm finely," she said. "Just simply finely. Listen. I want you to do me the most terrible favor. Will you? Will you please? Pretty please?"

"Listen," she said. "I want to meet Walter Williams. Honestly, I'm just simplycrazy about that man. Oh, when he sings!
When he sings those spirituals! Well, I said to Burton, 'It's a good thing for you Walter Williams is colored,' Isaid, 'or you'd have lots of reason to be jealous.' I'd really love to meet him. I'dlike to tell him I've heard him sing. Will you be an angel and introduce me to him?"

"Why, certainly," said her host. "I thought you'd met him.
The party's for him. Where is he, anyway?"

"He's over there by the bookcase," she said. "Let's wait till those people getthrough talking to him. Well, I think you're simply marvelous, giving thisperfectly marvelous party for him, and having him meet all these whitepeople, and all.
Isn't he terribly grateful?"

"I think it's really terribly nice," she said. "I do. I don't see why on earth it isn'tperfectly all right to meet colored people.
I haven't any feeling at all about itnot one single bit. Burton oh, he's just the other way. Well, you know, hecomes from Virginia, and you know how they are."

"Did he come tonight?", said her host.

"No, he couldn't," she said. "I'm a regular grass widow tonight. I told himwhen I left, 'There's no telling what I'll do,' I said. He was just so tired out, hecouldn't move. Isn't it a shame?"

"Wait till I tell him I met Walter Williams!", she said. "He'll just about die. Oh,we have more arguments about colored people. I talk to him like I don't knowwhat, I get so excited.
'Oh, don't be so silly,' I say. But I must say for Burton,he's a heap broader-minded than lots of these Southerners. He's reallyawfully fond of colored people. Well, he says himself, he wouldn't have whiteservants. And you know, he had this old colored nurse, this regular old niggermammy, and he just simply loves her. Why, every time he goes home, hegoes out in the kitchen to see her. He does, really, to this day. All he says is,he says he hasn't got a word to say against colored people as long as theykeep their place. He's always doing things for them, giving them clothes and Idon't know what all. The only thing he says, he says he wouldn't sit down atthe table with one for a million dollars. 'Oh,' I say to him, 'you make me sick,talking like that.' I'm just terrible to him.
Aren't I terrible?"

"I am," she said. "I know I am. Poor Burton! Now, me, I don't feel that way a tall. I haven't the slightest feeling about colored people. Why, I'm just crazyabout some of them.
They're just like children, just as easy-going, and alwayssinging and laughing and everything. Aren't they the happiest things you eversaw in your life? Honestly, it makes me laugh just to hear them. Oh, I likethem. I really do.
Well, now, listen, I have this colored laundress, I've had herfor years, and I'm devoted to her. She's really a character.
And I want to tellyou, I think of her as my friend. That's the way I think of her. As I say to Burton, 'Well, for Heaven's sakes,we're all human beings!' Aren't we?"

"Now this Walter Williams," she said. "I think a man like that's a real artist. I do. I think he deserves an awful lot of credit. Goodness, I'm so crazy aboutmusic or anything, I don't care what color he is. I honestly think if a person'san artist, nobody ought to have any feeling at all about meeting them. That's absolutely what I say to Burton. Don't you think I'm right?"

"That's the way I feel," she said. "I just can't understand people being narrow-minded.  Why, I absolutely think it's a privilege to meet a man like WalterWilliams. Yes, I do.
I haven't any feeling at all. Well, my goodness, the goodLord made him, just the same as He did any of us. Didn't He?"

"That's what I say," she said. "Oh, I get so furious when people are narrow-minded about colored people. It's just all I can do not to say something. Ofcourse, I do admit when you get a bad colored man, they're simply terrible. But as I say to Burton, there are some bad white people, too, in this world. Aren't there?"

"I guess there are," said her host.

"Why, I'd really be glad to have a man like Walter Williams come to my houseand sing for us, some time," she said. "Of course, I couldn't ask him onaccount of Burton, but I wouldn't have any feeling about it at all. Oh, can't hesing!
Isn't it marvelous, the way they all have music in them?
It just seems tobe right in them. Come on, let's us go on over and talk to him. Listen, whatshall I do when I'm introduced?
Ought I to shake hands? Or what?"

"Why, do whatever you want," said her host.

"I guess maybe I'd better," she said. "I wouldn't for the world have him think I had any feeling. I think I'd better shake hands, just the way I would withanybody else. That's just exactly what I'll do."

They reached the tall young Negro, standing by the bookcase.
The hostperformed introductions; the Negro bowed.

The woman with the pink velvet poppies extended her hand at the length ofher arm and held it so for all the world to see, until the Negro took it, shook it,and gave it back to her.

"Oh, how do you do, Mr. Williams," she said. "Well how do you do. I've justbeen saying, I've enjoyed your singing so awfully much. I've been to yourconcerts, and we have you on the phonograph and everything. Oh, I just enjoy it!"

She spoke with great distinctness, moving her lips meticulously, as if inparlance with the deaf.

"I'm just simply crazy about that 'Water Boy' thing you sing," she said. "Honestly, I can't get it out of my head. I have my husband nearly crazy, theway I go around humming it all the time. Oh, he looks just as black as the ace of. . . Well. Tell me, where on earth do you ever get all those songs of yours?
How do you ever get hold of them?"

"I should think you'd love singing them," she said. "It must be more fun. All those darling old spirituals oh, I just love them!
Well, what are you doing,now? Are you still keeping up your singing? Why don't you have another concert, some time?"

"I'm having one the sixteenth of this month," he said.

"Well, I'll be there," she said. "I'll be there, if I possibly can. You can count on me. Goodness, here comes a whole raft of people to talk to you. You're just aregular guest of honor!
Oh, who's that girl in white? I've seen her some place."

"Oh, I do, too," she said. "Just wonderful. Well, goodness, we must givesomeone else a chance to talk to the guest of honor.
Now, don't forget, Mr.Williams, I'm going to be at that concert if I possibly can. I'll be thereapplauding like everything. And if I can't come, I'm going to tell everybody Iknow to go, anyway. Don't you forget!"

"Oh, my dear," she said. "I nearly died! Honestly, I give you my word, I nearlypassed away. Did you hear that terrible break I made? I was just going to sayKatherine Burke looked almost like a nigger. I just caught myself in time. Oh,do you think he noticed?"

"Well, thank goodness," she said, "because I wouldn't have embarrassed himfor anything. Why, he's awfully nice. Just as nice as he can be. Nice manners,and everything. You know, so many colored people, you give them an inch,and they walk all over you. But he doesn't try any of that. Well, he's got moresense, I suppose. He's really nice. Don't you think so?"

"I liked him," she said. "I haven't any feeling at all because he's a colored man. I felt just as natural as I would with anybody. Talked to him just as naturally,and everything.
But honestly, I could hardly keep a straight face. I kept thinking of Burton. Oh, wait till I tell Burton I called him 'Mister'!"