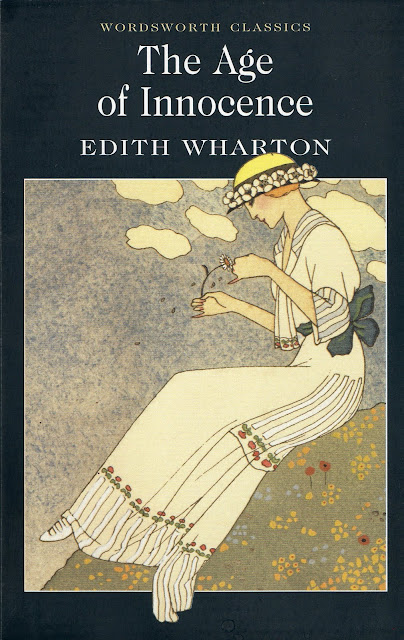 The fire in May 2016 that gutted this 200-year-old building - a blaze that could be seen for miles around - has not only cost New York City a great architectural treasure but also a literary and historical one. For it was in this church on 29 April 1882 that 23-year-old Edith Wharton married businessma Teddy Wharton. The marriage was unsatisfactory - some say it was a sexual disaster - and it spurred Edith to drift into fiction in her forties. She became the first woman to be awarded the Pulitzer Prize in 1921.
In such an old city, there are surprisingly few relics that remain as they were during the prolific novelist’s time, and nothing, beyond a small red plaque at her childhood home, to commemorate the most iconic New York writer of the late 19th and early 20th century. 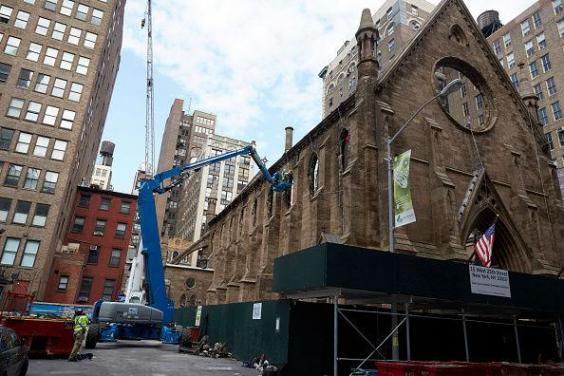 The church where Edith Wharton was married is now a ruin (Getty)
Francis Morrone, architectural historian and NYU professor, tried to rally a movement to erect a statue of Ms Wharton on Central Park’s “Mall and Literary Avenue”, alongside Walter Scott and Robert Burns, but, in his own words, “it went nowhere”.
So much has changed, and continues to change, in a landscape that houses more than eight million people. Edith would be startled by the escalating prices in Greenwich Village around Hudson Street, a truly downmarket area in her day, according to Mr Morrone. She might also be puzzled by the glass skyscrapers crowding along Fifth Avenue, which was once all residential housing. 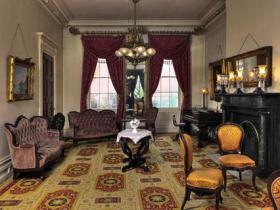 New York's first ever landmark and oldest townhouse is under threat

Maybe the failure to commemorate the writer is partly due to the fact that she did not really like the city at all.
She once famously said that brownstone – a local, muddy-coloured sandstone from Connecticut – was the “most hideous stone ever quarried”.
“New York City was a dismal, ugly city in her time – there is no getting around it,” says Mr Morrone as we saunter along West 23rd Street to view the Nobel Prize for Literature nominee's childhood home.
“The feelings of her New York girlhood softened a great deal as she got older. By the time she wrote “The Age of Innocence”, the writing doesn’t have the sort of sharp edge that "The House of Mirth" has. But she didn’t want to live here.”
The plaque at number 14 West 23rd Street says that Edith's house marks the boundary of fashionable district in the 1850s, when it was built. 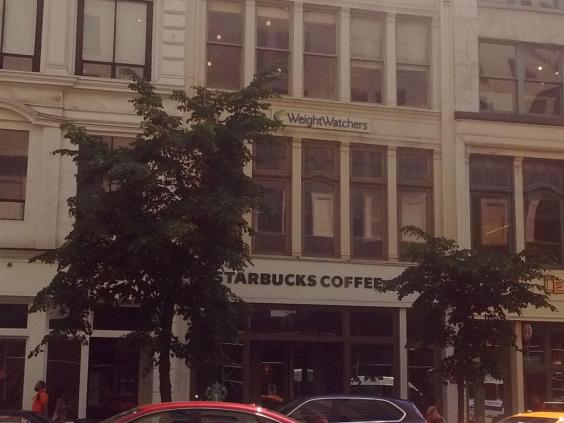 Edith's childhood home is now a Starbucks and a WeightWatchers (The Independent)
“That is very untrue," says Mr Morrone. "By the time Edith Wharton was born in 1862, Murray Hill, the East 30s and 40s [streets], were the northern boundary of the fashionable neighbourhood."
Her house has been altered so many times in the last century that it cannot be delegated as a protected building. It is now a Starbucks on the ground floor, where her father’s extensive study used to be.
Below is the only known photo of the original building: 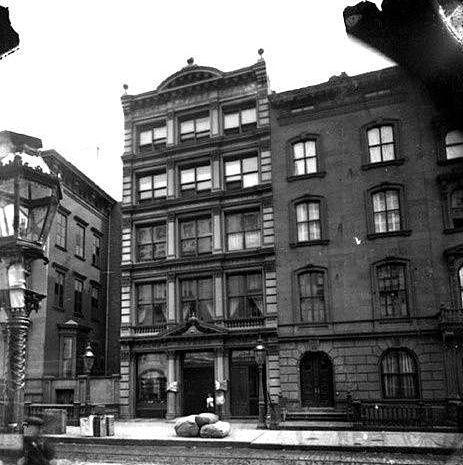 14 West 23rd Street (Courtesy of Francis Morrone)
“I always imagine her reading Shakespeare and the romantic poets, right where the little counter where the milk and sugar packets are,” Mr Morrone says.
Although the corporate exterior of the building might cause some to groan, few people might know that Starbucks was named after a character in “Moby Dick” by Herman Melville, a distant cousin of Edith's.
She never had a formal day of schooling in her life, and the cold relationship with her mother did little to encourage her writing. Yet the shy and nervous girl read all the books she could find until she went on to write “The Decoration of Houses”, which is still an important resource for architects today.
Her childhood brownstone was sold in 1882 by Edith’s mother to a retailer, who replaced the traditional brownstone front and the so-called English entrance with a commercial, cast iron front. A few doors down the street, only the top half of a building has been left as a brownstone, which gives the viewer an idea of what her house once looked like. 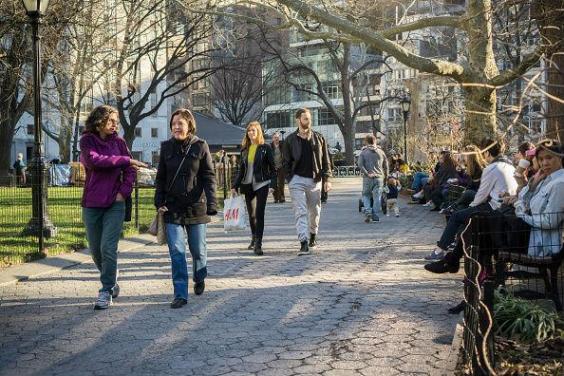 Edith spent much of her younger years in Madison Square Park (Getty)
Take a stroll around Madison Park – just off West 23rd street – and you will find the layout of paths and greenery is exactly the same as when she played there most days as a child, accompanied by her governess.
It was there, at 13 years old, she met Emmeline Washburn, six years her senior and reportedly in love with her. Emmeline was adventurous, and the pair often explored the city, including into strictly out of bounds areas like the Lower East Side. It is speculated that on these rambles, according to Mr Morrone, Edith went inside cheap hotels and boarding houses, the interiors of which are so accurately described in her novels.
“She had to have experience of that somewhere,” says Mr Morrone.
[For anyone who wants to get more of an idea of the interior of 19th century aristocrats’ homes, including “velvet flocked” wallpaper mentioned in Edith’s novels, it is worth visiting the “Gilded New York” exhibition, on display at the Museum of the City of New York.]
When it came to marrying Teddy Wharton, the white marble, early Gothic Revival Grace Church on Broadway and East 10th street was normally the most appropriate venue for a high society weddings. Newland Archer and May Welland are married there in “The Age of Innocence”, and it was where the author herself was baptised. 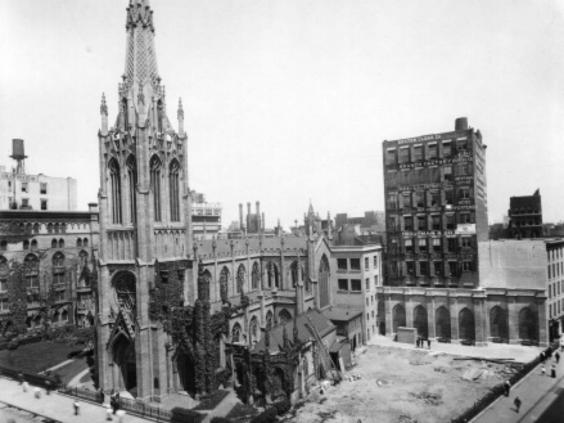 Ms Wharton was baptised in the Grace Chruch (Getty) 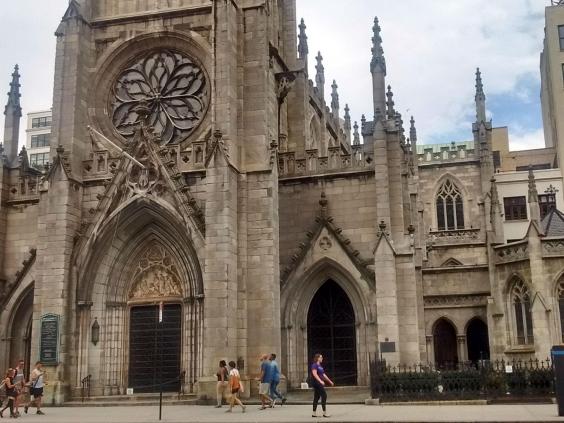 The church today (The Independent)
But Edith had already had a broken engagement – with the son of the Fifth Avenue Hotel owner’s widow – and the scandal was such that it was decided that the wedding should take place in the low-key St Sava cathedral two blocks over.
She and Teddy lived in her mother’s new house, 28 West 25th Street – the house no longer exists – until they relocated to a brownstone on Park Avenue. That house was part of a row of six identical houses, and only one remains, between 78th and 79th avenue. 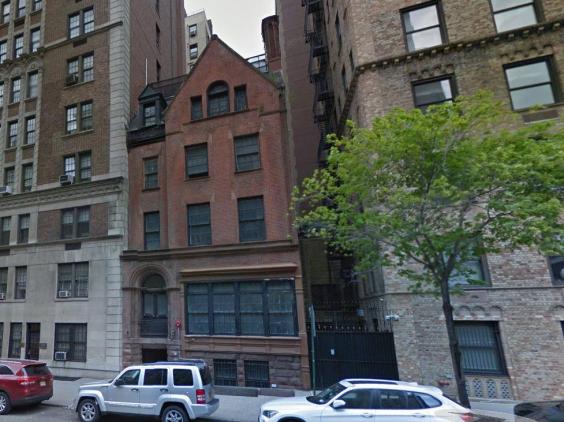 The last row house standing on Park Avenue (Google Maps)
Although some locations in her novels are mysteriously untraceable – like the miserable boarding house of the doomed Lily Bart in “The House of Mirth” – there are plenty of iconic landmarks in her books: Grand Central Station, The Central Park, Washington Square Park and Fifth Avenue.
Although when strolling around, fans will frequently have to use their imagination.
In her memoir, “A Backward Glance”, Edith wrote: “The Fifth Avenue of that day was a placid and uneventful thoroughfare along which genteel landaus, broughams, and victorias, and more countrified vehicles of the “carryall” and “surrey” type, moved up and down at decent intervals and a decorous pace.” 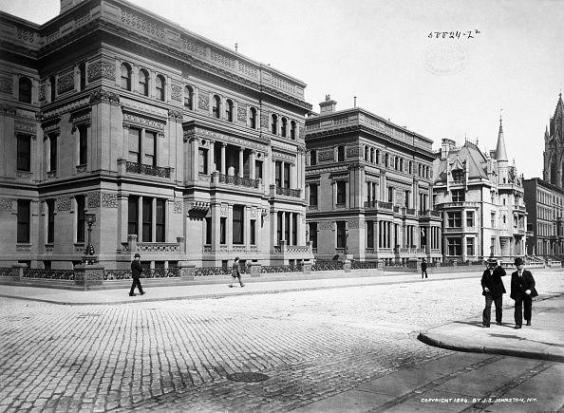 Fifth Avenue in the 19th century (Getty)
Fifth Avenue is almost completely unrecognisable from the days when fashionable society rode up and down in their carriages.
Delmonico’s, the famed restaurant frequented by the high and mighty, is no longer at the north-west corner of Madison Square Park. The Benedick – serviced apartments for bachelors that Lily Bart is seen scuttling out of – is based on a building in Washington Square, but was moved in “The House of Mirth” to the vicinity of Grand Central Station.
Mr Morrone points to one of the last original houses on Fifth Avenue at number 47, now the Salmagundi Art Club. It is grand, with wide smooth steps and a chandelier in the hallway, and will give people an idea of what the residential avenue used to look like.
Opposite the writer’s childhood home used to stand the once-fashionable Fifth Avenue Hotel, featured in her short story called “New Year’s Day”, where the hotel guests being evacuated onto the street due to a fire are watched by neighbours, who notice two guests are of their set and are clearly having an affair.
Reading Edith’s novels, one gets a sense of the claustrophobia within the respectable circles of society in which women of that era lived, and also an idea of the restricted geography of the grids and avenues which formed the boundaries of their world. The only really respectable area was Fifth Avenue, from the bottom to the top, although a few elite families were clinging on to their houses in around Washington Square Park. 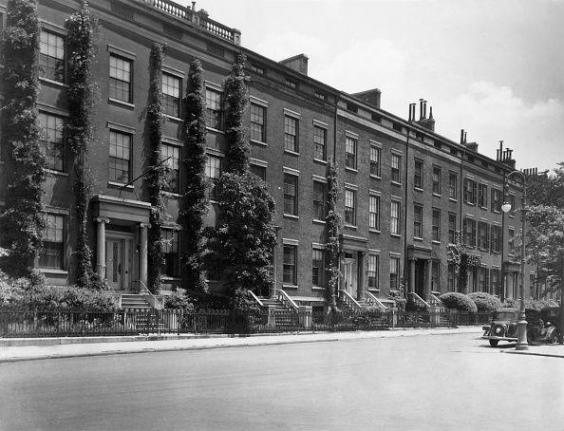 “[…] he looked up at the symmetrical old red-house front, with its frugal marble ornament, as he might have looked into a familiar human face.”
Edith and her husband retained their Park Avenue house for two decades, until the pair moved to Newport. Edith then designed and built The Mount, a grand countryside manor in Lennox, Massachusetts, where she continued to write. She moved permanently to Europe in 1906, never returning to the United States, and she died in her suburban villa in Seine-et-Oise near Paris in 1937.
“She died at 5:30 P.M., but her death was not known in Paris,” read her New York Times obituary.
Yet her characters, her stories, and the buildings - in many ways the City is a great character itself - linger on.
As for the ruined cathedral of Saint Sava on West 26th Street, Mr Morrone says the plan is to restore the remaining wall and to build a new church behind it.
It will be an important restoration. At least for historians and Edith Wharton devotees, looking at the front of the old grey-stone church will be like looking into a familiar human face.