Dambudzo Marechera / A brief survey of the short story

A brief survey of the short story part 54:

A writer who considered fiction a 'form of combat', his work is complex, challenging – and uniquely potent

"Like overhearing a scream", is how Doris Lessing described reading the Zimbabwean author Dambudzo Marechera's 1978 book The House of Hunger. Comprising a novella and a series of satellite stories, it marked the arrival of an extreme and unusual talent that was cut short by death from Aids-related illness in 1987. As China Miéville has noted, Marechera demands "sustained effort from the reader, so that the work is almost interactive – reading it is an active process of collaboration with the writer – and the metaphors are simultaneously so unclichéd and so apt that he reinvigorates the language".
Marechera described his writing as a form of "literary shock treatment", and the majority of his works are written in a sometimes difficult stream–of–consciousness style that owes a significant debt to European modernism. He has been called the "African Joyce", but the description is somewhat glib. After all, if you compare anyone with Joyce you had better specify which Joyce you mean. With its deliberately confused timelines, disorienting shifts between external event and internal process, and predilection for the grotesque, much of Marechera's writing lies somewhere between the night-town episode of Ulysses and JG Ballard's Atrocity Exhibition.
Written in English, his second language (his first was Shona), Marechera's prose exudes tension. He considered English a form of combat, a process of "discarding grammar, throwing syntax out, subverting images from within, beating the drum and cymbals of rhythm, developing torture chambers of irony and sarcasm, gas ovens of limitless black resonance".
Marechera grew up in troubled times. In 1965 Ian Smith's government issued the Unilateral Declaration of Independence (UDI), beginning a 15-year struggle that would end with Rhodesia becoming independent Zimbabwe in 1980. Throughout this period a civil war split the country into competing factions attempting to create white, black, democratic, Marxist and authoritarian states. In Marechera's work this state of affairs is represented by student spies working for the government, terrorist cells, violently suppressed street protests, and a general atmosphere of instability and threat.
Marechera's characters are typically outsiders. He was separated from the inhabitants of his township by education (he won a scholarship to the first Rhodesian public school to admit black pupils), separated from his homeland by exile, from his fellows at Oxford by racism, and finally, on his return to Zimbabwe after independence, from those who had fought while he lived in London. As he writes in Black Sunlight, "Steve Biko died while I was blind drunk in London. Soweto burned while I was sunk in deep thought about an editor's rejection slip." Oxford, Black Oxford, meanwhile, is a scabrous assault on the way Marechera (who was a wild and ill-disciplined, albeit brilliant student) was belittled by both the university tutors and his fellow students. The story begins and ends with bitterly ironic visions of beauty and hope, but the despair at its centre suggests that these intermittent moments of joy are remnants of an optimism that is being ground away by adverse reality.
The gap between the chaotic world of Marechera's fiction and his own life is small, although the manner in which he writes is far from typical autobiographical fiction. Rather, the works become struggles between what one critic describes as "competing identities". Often the narrator undergoes extraordinary transformations, like those found in the Polish author Bruno Schulz's stories, although with the accent more on dread than wonder. At the end of Protista, the narrator, who appears to have crossed from life into death, encounters a man from his village who drowned some time before:

Yesterday I met Barbara's father in the valley.
'I'll get you in the end, you rascal!' he screamed.
But I bit the silver button and turned myself into a crocodile and laughed my great sharp teeth at him.
He instantly turned himself into mist, and I could only bite chunks of air.

This folkloric element, effective as it can be, is untypical in Marechera; more often a character's reality is called into doubt in a way closer to the modernist crisis of the self. The effect is disquieting, and can, as in The House of Hunger, be little short of horrifying:

A doorway yawned blankly into me: it led to a smaller room: numb, dark and also utterly empty. I could not bring myself to touch the walls to prove that they were really there… For some reason I began to wonder if I was really in there; perhaps I was a mere creation of the rooms themselves. Another doorway brooded just ahead of me.

Nightmare visions and chaotic boundaries between fantasy and reality also characterise The Slow Sound of His Feet. In this short, devastating masterpiece, the narrator, an artist, struggles to come to terms with the consecutive violent deaths of his father and mother. Memory and reality are skilfully handled, with five successive mentions of waking up or opening and closing eyes blurring the line between dream and reality. The narrator tries and fails "to paint the feeling of the silent but desperate voices inside me". 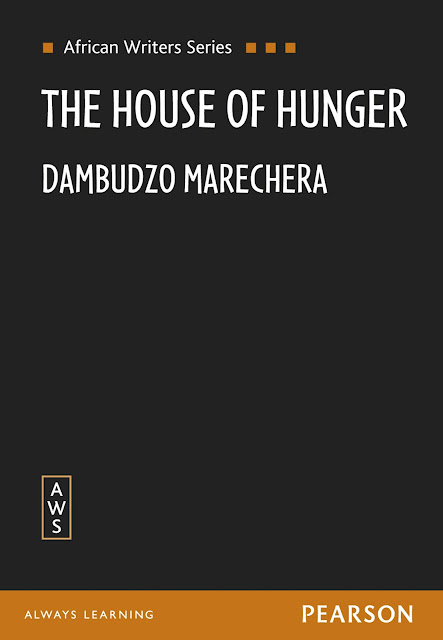 Of the many potent motifs in Marechera's work, the most definitive one is this inability to find one's voice. When the narrator's mother is shot dead in The Slow Sound of His Feet, his sister's hand, "coming up to touch my face, flew to her opening mouth and I could feel her straining her vocal muscles to scream through my mouth"; when the children bury their mother the sun is "screaming soundlessly"; in Protista, the narrator, attacked by the ghost of a drowned boy, cries out, "but I could not hear my own voice", while The Transformation of Harry ends with "something shrill" tearing into the narrator's ears:

Startled, I looked up. Philip and Ada were also staring.
The maddening high-pitched needles were coming from Harry.
But he was not making any sound.

The heart of Marechera's work, as these examples suggest, is a bleak territory. "Life", as he puts it in The House of Hunger, is like "a series of hunger-scoured hovels stretching endlessly towards the horizon". African critics attacked him for this attitude, Juliet Okonkwo writing in 1981 that his "excessive interest in sex activity, his tireless attempt to rake up filth, is alien to Africa – a continent of hope and realisable dreams". Marechera's position? "If you are a writer for a specific nation or a specific race, then fuck you."
Marechera is a challenging writer. Even supporters like John Wyllie, a reader for the publisher Heinemann who thought Marechera "a sort of African Dylan Thomas only much more intelligent than Thomas ever was", despaired after trying to recommend changes to one particular work: "I have worked through Black Sunlight three times and now feel that I need to go away into the nice quiet Irish countryside and have a nervous breakdown". But what some see as wilful or naive complication is, for Marechera, an honest accounting of his reality. It can be confounding, sometimes tedious, but also exhilarating, and often reads like no other writer you know. As Marechera's alter ego in The Black Insider states, "To write as though only one kind of reality subsists in the world is to act out a mentally retarded mime, for a mentally deficient audience". This uncompromising stance is a cogent challenge to conventional narrative styles, a declaration that the most convincing versions of reality might not be smooth or fluent, but chaotic and fractured.