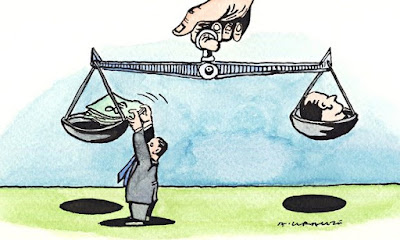 By Jonathan Littell
For Obama and Cameron, the political cost of the hostages’ deaths is far higher than any ransom
A
few months ago, the New York Times published a lengthy piece of investigative journalism detailing different countries’ policies on paying ransoms for journalists, aid workers or ordinary citizens taken hostage throughout the world, in particular by Islamist militant groups. The article pressed the case for the US and British policy of never – ever – negotiating for hostages, while presenting the covert European policy of paying ransoms as perverse, self-defeating and possibly even criminal. Its headline made this conclusion clear: “By paying ransoms, Europe bankrolls Qaeda terror.”

The article was, of course, researched and written before James Foley, and after him Steven Sotloff, David Haines, Alan Henning and Peter Kassig – four other US and British citizens their governments refused to negotiate for – had their heads sawn off in front of a video camera by a masked goon claiming allegiance to the so-called Islamic State (Isis), thereby provoking the US to lead a major military intervention against the group.
France and several other countries who did negotiate on behalf of their hostages, and obtained their safe return home, have now also joined the coalition against Isis. These countries obviously believe, unlike the US and the UK, that they have a moral duty to protect their citizens, and that this principle on occasion can lead to unpleasant compromises (it might be added that Israel, a country no one would even remotely consider weak or soft on terrorism, adheres to a similar principle). However, what might be called their hostage “non-policy” (in most cases, paying ransoms and then denying it) has made it impossible for them to debate the matter constructively. While I would never advocate the systematic paying of ransoms, I feel it might be time to bring some nuance to the discussion: things are not simply black and white.
Stated simply, the main argument for not paying ransoms is the idea that negotiating encourages more hostage-taking, whereas refusing to negotiate discourages it. This view is so strongly held in the UK that the government has just announced that its new counter-terror bill would make ransom payments, including by British insurance companies, a criminal offence.
This argument would have some validity if hostage-takers actually planned their strategies in advance and targeted their victims according to nationality. However, as most people working in the field or familiar with the problem know, this is hardly ever the case: in nearly every single wave of major international kidnappings (such as in Chechnya from 1996 to 1999, Afghanistan and Iraq in the mid-2000s and Syria from 2012), small local criminals or armed groups begin grabbing at random whoever is available, and only later try to figure out what to do with them. Eventually, a larger group such as Isis or the Taliban might purchase the hostages from them and establish a broader strategy for negotiation; but even then, kidnapping remains ad hoc and more a question of opportunity than choice.

Furthermore, in the case of Isis, the facts do not support the US and British case for non-payment as a deterrent. The men the hostages called “the Beatles” – the three jihadis of British origin who managed the Isis kidnappings – were clearly aware of British and US policy; yet this did not prevent them, after acquiring Foley andJohn Cantlie from the independent group that first abducted them, from going on to seek and capture five other hostages from these nationalities. As one of Isis’s former European hostages recently explained to me during a private conversation: “The Beatles knew that if they couldn’t use an American or a Briton to negotiate, they could always use them for a propaganda video, as they indeed did. John Cantlie told me that in the winter of 2013, some time after he and Foley were captured, one of the jihadists holding them said to them: ‘You don’t matter to your governments for now, but you’ll see when there are more of you.’”
None of this has prevented the Obama administration from seeking to justify its position, as the New York Times reported, by claiming that far fewer Americans and Britons have been kidnapped by Islamists than Europeans, nor of going as far as to suggest that “al-Qaida may no longer want to kidnap Americans” – a bold leap of faith indeed.
While the raw numbers provided in justification of this assertion are certainly correct, one should point out that their sole validity is relative to the number of people the groups in question might actually have had a genuine opportunity to kidnap. The US and UK certainly have a massive expatriate presence in both Iraq and Afghanistan, but virtually all of it (aside from the military) are government officials or aid workers living in highly protected compounds, and venturing forth only with armed escorts. Opportunities for kidnapping Europeans, who travel more often to the field without “hard protection”, have been correspondingly

Pursuing this line of thinking, one might wonder if the US and UK policy is designed not so much to discourage potential kidnappers as any journalists and aid workers that might be tempted to conduct their work independently. It was, after all, the US government that successfully modernised military propaganda by conceiving the policy of embedding journalists within its armed forces, a model that relies among other things on making it impossible for them to work in any other way.
It might also be pointed out that there is a strongly hypocritical strain to the US and UK’s public position. I am not the first to note the inconsistency between the Obama administration’s willingness to released five high-value Taliban prisoners in exchange for a US army private, while refusing to negotiate for Foley, Sotloff and Kassig, as well as the unnamed American woman still in the hands of Isis; and the administration has been struggling for some time, rather unsuccessfully, to justify that inconsistency.
But there are many other ways of securing the release of hostages than delivering suitcases of cash or trading prisoners, and our governments know that full well. In 1998, the Russian oligarch Boris Berezovsky paid $1.5m out of his pocket for the release of two British aid workers taken hostage in Chechnya – Jon James and Camilla Carr; British officials, of course, denied any involvement in the matter. Yet two years later, when Berezovsky fell out with the newly elected Russian president, Vladimir Putin, it was to Britain that he turned for help, and it was Britain that granted him political asylum, allowing him to live there in safety until his mysterious death last year.
More recently, when the US hostage Peter Theo Curtis was released by the al-Nusra Front (al-Qaida’s official franchise in Syria), the official version was that Qatari officials had convinced them to do so as a “goodwill gesture” to demonstrate their difference with Isis. No monies, it was loudly claimed on all sides, were paid. Never mind what really occurred; the point is that an American hostage came home through a negotiated process, without the official US hard line being publicly challenged in any meaningful way.
There is, however, one last point to be made – a far more crucial one. When Isis’s sole Russian hostage, Sergey Gorbunov, was murdered last spring after his government refused to ransom him, Russian and world public opinion blissfully ignored the fact, if they were even aware of it. However, when James Foley was killed, the US and UK governments (which in spite of repeated warnings about “red lines” had refused to intervene when hundreds of civilians were gassed to death by the Bashar al-Assad regime in Damascus in August 2013, and had only timidly begun to support the Iraqi and Kurdish forces after the fall of Mosul to Isis in June 2014) were in effect dragged into their third Middle East war in 13 years.
I will not discuss here the pros and cons of such a war: I will simply point out that it was a decision made most reluctantly by our governments, under pressure from public opinion. For in democratic countries, for better or for worse, it is not just individuals who are taken hostage but, in a way, the entire society; and democratic governments, whether they like it or not, have no choice but to take this into account.
Isis knew exactly what it was doing when it killed Foley and the others; our reaction is most likely precisely what the group sought, perhaps because it calculated that being bombed by the west would only strengthen its hand locally, drawing in thousands of fresh recruits and helping to bring in line the hesitant.
For Barack Obama and David Cameron, the political cost of their citizens’ deaths as hostages has proved far higher than that of any kind of negotiated solution. When your policies allow your enemies to dictate your decisions, especially in matters as crucial as war, they might well need some revision.