James Kelman celebrates Descartes, whose work is still feared and hated by those who seek to impose tyranny 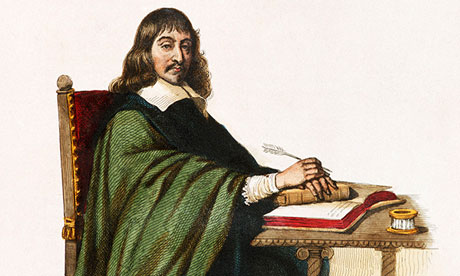 René Descartes, king of the first-person narrative. Photograph: Leonard de Selva/Corbis
The shadow of René Descartes lurks behind almost every literary tradition. Throughout Europe the response to his philosophy was seminal. Thinkers sought to escape from scepticism and the separation between mind and body. How they underwent this in Scotland is the root of the "Scottish Enlightenment".
The literary tradition of my country is distinctive. We find not simply echoes of a particular post-Cartesian philosophy, but the development of a literary model. James Hogg's Confessions of a Justified Sinner, published in 1824, provides a bridge between the subjective perception and external reality. So‑called "stream of consciousness" would have left us stuck in the subjective mire, unable to escape from relativism.
Within this context, the transcription of language from its oral forms is integral to Scottish literature. It is not imposed by external authority, whether English, Scots or Gàidhlig; it is a language used by live human beings, given voice by poets from Robert Fergusson through Tom Leonard. It is no accident that Hogg's masterpiece was "rediscovered" not by an English or American critic, but by the French writer André Gide.
I would offer Descartes's First Meditation to all students of literary art. His use of the first-person narrative brings into play notions of time and space, creating drama.
His use of the first person introduces that other most vital, always radical idea: the primacy of the individual perception. A sceptical voice, the child questioning the adult, the artist challenging convention, the individual challenging authority; casting doubt on infallibility and the imposition of authoritarian control. Descartes the hero. Five hundred years later, his work is still feared and hated by those who seek to impose tyranny.