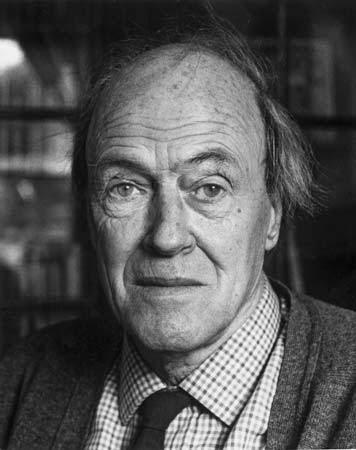 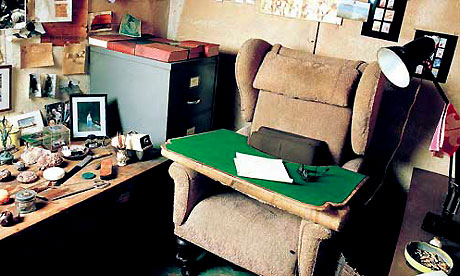 Photograph: Eamonn McCabe
I didn't go into the shed very often, because the whole point of it as far as Roald was concerned was that it was private, a sanctuary where he could work where no one interrupted him. The whole of the inside was organised as a place for writing: so the old wing-back chair had part of the back burrowed out to make it more comfortable; he had a sleeping bag that he put his legs in when it was cold and a footstool to rest them on; he had a very characteristic Roald arrangement for a writing table with a bar across the arms of the chair and a cardboard tube that altered the angle of the board on which he wrote. As he didn't want to move from his chair everything was within reach. He wrote on yellow legal paper with his favourite kind of pencils; he started off with a handful of them ready sharpened. He used to smoke and there is an ashtray with cigarette butts preserved to this day.
The table near to his right hand had all kinds of strange memorabilia on it, one of which was part of his own hip bone that had been removed; another was a ball of silver paper that he'd collected from bars of chocolate since he was a young man and it had gradually increased in size. There were various other things that had been sent to him by fans or schoolchildren.
On the wall were letters from schools, and photographs of his family. The three or four strips of paper behind his head were bookmarks, which I had drawn. He kept the curtains closed so that nothing from outside came in to interfere with the story that he was imagining. He went into the shed in the morning and wrote until lunchtime. He didn't write in the afternoon, but went back later to edit what he'd done after it had been typed out by his secretary.
He wrote in the shed as long as I knew him - wTope worked together for 15 years from 1975 to 1990 and I illustrated a dozen of his books. I would take my drawings down to Gipsy House for him to look at while sitting on the sofa in the dining room. I don't think he let anybody in the shed.