How well do we know Mexico's most celebrated artist? 100 years after her birth, I discover a new twist ...
Posted by Javier Espinoza
The Guardian, Tuesday 11 December 2007 16.10 GMT 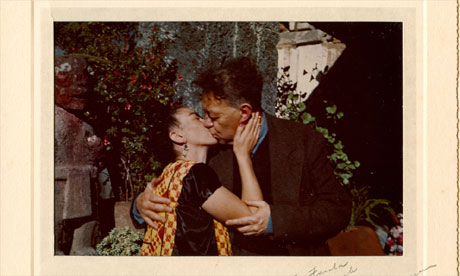 No sign of Trotsky ... a photograph of Kahlo and Rivera from Kahlo's private correspondance
It's part of Frida Kahlo's considerable legend that she had a brief but passionate love affair with Trotsky shortly after his arrival in Mexico from Russia, where Stalin had ousted him from the government. Yet judging by a series of letters and documents that have only now come to light, it turns out the "affair" never took place. In the letters the painter talks down to the revolutionary and campaigns for her husband, fellow painter Diego Rivera, to assume a more prominent role in the communist party.
The documents have remained hidden for 50 years on Rivera's orders. Rivera, 20 years Kahlo's senior, left strict orders to his trust's caretakers not to open them until 15 years after his death in 1957. However, one of Rivera's patrons kept the collection secret in the couple's house-turned-museum, fearing it might contain information that would compromise the couple's image.
Reading the letters, given exclusively to Guardian Unlimited, I feel like a secret spectator on the legendary artists' lives. In 1939, Kahlo wrote to Trotsky from Paris: "Dear Lev Davidovich: In your letter you say: 'Diego should never accept a bureaucratic position in the organisation because he never writes, never answers letters, never comes to meetings on time (...)' So your conclusion is that he is a lousy 'secretary'. This position of yours I find rather unjust and childish. On several occasions in your house I observed that whenever there was a discussion of any kind, and Diego gave his opinion, you always took it with a certain irony and doubtfulness of its truthfulness. This kind of irony in time gets on one's nerves".
The letters also dispel the image of Rivera as an abusive husband to Kahlo, who died in 1954 at the age of 47. His ardour in the letters is almost embarrassing. In 1932 he wrote from Detroit: "Little sweet child of mine: My beautiful baby, I have just received your letter and I have no words but to say I love you. Many kisses my child."
Kahlo was not only emotionally but economically dependent on Rivera. "Take the 300 dollars from the mask to pay your bills," he writes from a hotel in the United States in 1939. Although both were known for their infidelities Frida grew more and more obsessed by him. In a note to him she writes: "Child of my eyes: Today, even though you don't remember, is your saint's day. 13 November. I am giving you these little things so you see that I know every single day of your life because your life is mine. Your girl, Frida."
The letters are among more than 30,000 other objects, photographs, notes, sketches, magazines, books and pieces of clothing that will become fully available to researchers for the first time next summer. I am heading there myself to discover more hidden treasures.