I was born on D-day

I was born on D-day

As Shena Mackay celebrates her 70th birthday she asks was hers the 'most fortunate generation'?
By Shena Mackay
Tue Guardian, Friday 6 June 2014 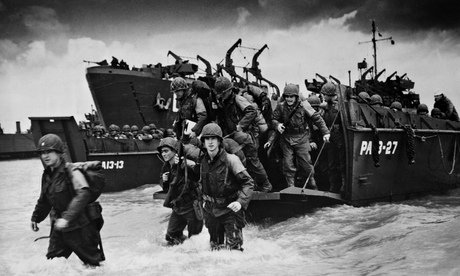 The allied invasion of France on D-day. Photograph: Hulton Archive
I was born on 6 June 1944 and if my mother had taken up the suggestion of the nurses my name would be Deeday. The mood in that Edinburgh nursing home must have been euphoric because the BBC had just announced that the allied troops had landed in Normandy. Nobody could have known then the horrific toll in casualties on that day or the scale of the atrocities still to come before the war was really over, but it marked a turning point on the long road to peace. Although I'm relieved that I wasn't called Deeday and that I haven't had to go through 70 years explaining my name, it always seemed an honour to be born on that historic day, and the date had an intrinsic beauty to a synaesthetic child who saw letters and numbers in colour. For me, June and 6 share the fragrant crimson of summer roses, while 19 is white and rich amber and 44 blazes in yellow gold. My birthday was a day of roses and gold even though D-day itself is starkly black and all the newspaper photographs are monochrome images of sailors and soldiers in combat gear, planes, tanks and landing craft.

My father, Benjamin Mackay, was serving with a Highland regiment at the time, stationed on Orkney. He and my mother Morag were married there. Morag, a minister's daughter, joined a Church of Scotland organisation that travelled round the island with a mobile canteen for the troops. My sister Frances was born on Orkney in 1942 but by D-day we were living in a rented flat in Edinburgh; all I remember of that is steep stone steps to the dangerously heavy front door, and the lovely beribboned Polish costume a neighbour, probably a refugee, sewed for my sister, and the doll called Ned Sparks (named after the film star) that she gave me.
My parents were socialists. They met at St Andrew's University where they both studied French and German. My mother who, in the late 1930s, had been an au pair in Germany, where she encountered terrifying members of the Hitler Youth, loved the German language, music and literature – Brecht and Weill, Thomas Mann, and Austrian Schubert, the paintings of the Blaue Reiter group of artists. At university she had a dear friend, Gustav, a theology student who returned to Germany at the outbreak of the war and was never heard from again.
It was the legacy of the war that informed my early consciousness. Our family weathered the great winter of 1947 in rural South Queensferry, then moved south to various addresses in London before settling for a while in Canterbury, where my sister Elsa was born in 1949. Beautiful Canterbury was one of the most bombed cities in England. The evidence of conflict was everywhere, in burned and blackened buildings and sliced houses with their wallpapered rooms and baths and sinks hanging in the sky, and in the bombsites, which made wonderful adventure playgrounds for postwar children, where wild flowers were asserting themselves over rubble, shards of metal and broken glass. There were land girls in the fields, ration books in the shops, and on street corners stood ex-servicemen, some on crutches, some missing limbs, with trays of matches hung around their necks, their eyes avoiding those of the child proffering tuppence. And there were far too many war widows and orphaned children.
My generation, who benefited so much from postwar optimism and rebuilding, were children of the British empire. At school, we saluted the flag on Empire Day. Many of us went to Sunday school. Music While You Work was still broadcast from factories where so many women had worked in munitions and other essential industries. There was corporal and capital punishment (I remember my mother turning off the wireless on the morning of an execution). Homosexuality was a crime. Some children came to school in ragged clothes and plimsolls with the toes cut out to accommodate growing feet, but nevertheless we have been called the most fortunate generation in history and there is some truth in that. The National Health Service was established in 1948 – free orange juice and disgusting cod-liver oil for us – and the 1944 Education Act, which heralded the divisive 11-plus, raised the school-leaving age to 15. Our school in Canterbury was brand new and, although we had little money, I was privileged, later, to go to a grammar school and also to Kidbrooke, a flagship comprehensive school. My education, so far as it went, was excellent and, had I gone to university, I should have paid no fees. What a different story for my grandchildren. It seems astonishing now that it took the 1944 act to repeal the ban on women teachers marrying, but the mind boggles at the casual misogyny, routine racism and anti-semitism found in novels of the period. It wasn't just our school that was new – the Marlowe theatre, where Powell and Pressburger's weird but compelling allegorical film A Canterbury Tale premiered in 1944, reopened, and houses sprang up from muddy sites. Because my mother was a teacher and expecting a baby, and my father got a job as a miner at Snowdown colliery in Kent, we were allocated a council house. It was paradise after the squalid lodgings we had been in.
In this momentous year, which marks not only the 70th anniversary of D-day but the centenary of the start of the first world war, it is hard not to wonder how we, the heirs to so much heroism, would have shaped up if we had been put to the test. Are we worthy of it? Would we be as brave and resourceful as our parents? Could we bear to have our children evacuated? Has our nation's finest hour been and gone? Will phrases such as "the night of broken glass" (Kristallnacht), "little ships" and "the few", which are so emotive for us, mean anything to subsequent generations?
There is little cause for optimism about the state of the world now: as I prepare to celebrate my 70th birthday with those I love, I recall, with all our grandchildren in mind, the words of Laurence Binyon's poem "O World, Be Nobler":