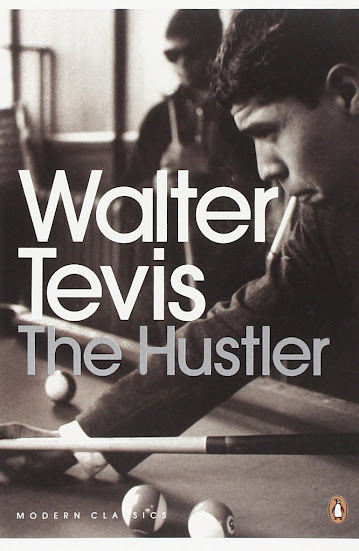 No one in Carlisle knew when the new high school English teacher showed up in 1952 what that teacher's future might hold. In spite of an Ichabod Crane look and often ill-fitting clothes, Walter Tevis became popular in the community. Shortly after coming to the school, he met Jamie Griggs, a recent graduate of Eastern Kentucky University and home economics teacher who also was new there.

The two of them soon became an item, and everyone in town knew it. Jamie would accompany Walter at lunchtime on walks outside of the school, while he smoked and told her of his plans to become a writer. During football games, the pair sold coffee and popcorn in the concession stand. At 24 and 22, respectively, Walter and Jamie felt they were young enough to socialize with their students at the local drugstore soda fountain.

Away from school and away from Jamie, Walter usually could be found at Gaunce’s Pool Room downtown.

Though born in San Francisco, Tevis always considered himself a Kentuckian. His parents were Madison County natives and returned there with Walter in 1938, when he was 10.

Spending time in Lexington during his early youth, Tevis had become good friends with Toby Kavanaugh, whose father bought him a pool table to keep him out of trouble. It was Tevis’ first taste of shooting pool. At 17, Tevis joined the Navy, where he encountered gambling for the first time. The combination of pool and gambling started the clock ticking toward what was to come.

Kavanaugh became so good at pool that his reputation, with the help of Tevis, spread throughout central Kentucky. Later, Kavanaugh opened his own poolroom on South Limestone, and soon it became the place to find any kind of pool game you were looking for.

Wayne Gaunce grew up in Carlisle, and it was his parents who owned the most popular poolroom in that town. Gaunce, who later would become a successful entrepreneur in Glasgow, was considered a pretty fair country shooter who sometimes got the call to play out-of-towners passing through.

Tevis himself had become one of the local characters, but it was the out-of-towners Gaunce zeroed in on. Tibbs Goodpasture came from Dayton; “Des Moines Iowa” Curley came to town, too. There were others. Any of them wanting to find the right hustle were looking for a real poolroom. And the real one had no fancy bars, no pinball machines, and no bowling alleys. They were not where respectable people could be found. Those kinds of places were associated with criminals, shysters and gamblers.

Don Dampier grew up in Carlisle and was one of Tevis’ students at the high school.

“He was a brilliant guy,” said Dampier, who was president of the Carlisle High School class of 1955. “He loved pool, and it seemed like every afternoon when school was out, that’s where he’d go. There were a few times some of us boys would slip in and watch him shoot. Back then, poolrooms were not where good boys went.”

Gaunce would see Tevis in the poolroom a lot. “He played quite a bit,” Gaunce recalled. “He wasn’t actually that good of a player, but he loved it.”

It was Tevis’ passion for shooting pool and writing stories that set him on a course that few would have predicted. His time in the poolrooms of Carlisle and around central Kentucky was well spent, later paying big dividends—not from the money he was playing for but from what he wrote in one of his stories.

In 1955, Collier’s magazine published a poolroom story Tevis had penned. Titled “The Big Hustle,” it was the springboard for his rise to literary prominence.

Staying true to his ambition to someday become a writer, Tevis wrote stories that were good enough to be published in high-profile magazines such as Cosmopolitan, Esquire, Galaxy Science Fiction, Playboy, Redbook and The Saturday Evening Post.

While living in Carlisle, Walter and Jamie some weekends would take the bus to Lexington, where he would show her around the places he had lived and where he and his friend Kavanaugh would shoot pool. Walter was proud of having graduated from the University of Kentucky in 1949 with an English degree and would visit the campus with Jamie.

Dampier’s connection to Tevis went beyond Carlisle. “I actually had him for a teacher my freshman year at UK,” Dampier said.

Tevis had left Carlisle and gone back to UK as a graduate student and teaching assistant in the English department. Following graduation, he took a job as the editor of publications for the Kentucky Department of Highways.

As Tevis’ income began to rise with his new job and money from his magazine articles, he and Jamie splurged on an old, used dull-green pointed-nose Studebaker they bought for $350. It mattered little that neither had a driver’s license. That would come later.

Soon, Tevis was encouraged to expand his magazine article into a novel, and in 1959, The Hustler hit the bookstores.

Although categorized as fiction, his new book was a result of all those years spent in small-town poolrooms, sometimes cueing it up against the best but, more importantly, filing the experiences away in his mind for later use.

Two years later, his novel hit the big screen in a film adaptation of the same name. It starred Paul Newman as Fast Eddie and Jackie Gleason as Minnesota Fats. A rising star, George C. Scott, also was in the movie.

The Hustler was a major success, and Tevis’ position in life improved with the $25,000 he received for the movie rights. The film was nominated for nine Academy Awards, including best picture. West Side Story garnered best picture honors, but The Hustler won awards for best cinematography, black-and-white; and best art direction–set decoration, black-and-white.

It was said that, following the release of The Hustler, the poolroom industry boomed across America, and bowling alleys suddenly found some spaces for a couple of pool tables.

Shortly after hitting the theaters, The Hustler brought out a multitude of pool sharks who said they were the inspiration for the characters Fast Eddie and Minnesota Fats. Fast Eddie Pelkey and Fast Eddie Parker each claimed to be Tevis’ Fast Eddie Felson. An avalanche of hustlers came out of the woodwork saying they were Minnesota Fats, but Rudolf Wanderone Jr. was the most vocal in insisting that character was modeled on him.

Tevis, however, maintained throughout his life that he and he alone created the characters in his books. They weren’t based on any one personality but combinations of those hustlers who had found their way to Carlisle, Paris, Lexington and Winchester.

Tevis was not a one-hit wonder. His 1963 novel, The Man Who Fell to Earth, was made into a 1976 film of the same name starring musician/actor David Bowie.

In 1986, Hollywood saw the potential of a sequel to The Hustler. Again starring Newman, this time, Tom Cruise was added to the cast of The Color of Money. Jamie Tevis had said it took some persuasion on Walter’s part to bring Newman on board. She also reported that, “While [Walter] received some compensation, his screenplay was not used in production, and he was just paid for the title and the idea of the story.”

After 28 years of marriage, Walter and Jamie divorced. She published a book of her own in 2003, titled My Life With the Hustler.

Walter married second wife Eleanor in 1983, and shortly after finishing the book version of The Color of Money, he died in 1984 of lung cancer at age 56 before seeing it hit the big screen. In 2016, his widow, Eleanor jumped to her death from a three-story church in New York City at the age of 80.

Three of Tevis’ six novels have been adapted into movies, and his books have been translated into 18 languages. Along the way, he left his mark as a teacher on the small Kentucky towns of Irvine, Hawesville, Carlisle and Science Hill, and at Northern Kentucky University. In January 2018, Tevis received long-overdue accolades with his induction into the Kentucky Writers Hall of Fame.

Posted by Ficciones at Wednesday, November 25, 2020