Jack Vettriano / The Singing Butler Did It 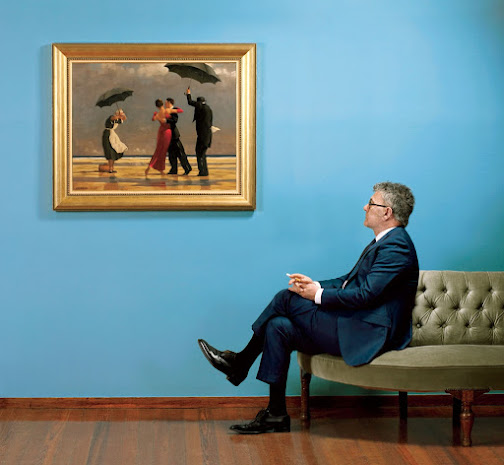 The Singing Butler Did It
Critics say Jack Vettriano paints brainless erotica. But ever since Vettriano’s 1992 canvas The Singing Butler became Britain’s best-selling image, ubiquitous on posters, calendars, and jigsaw puzzles, the 60-year-old former coal miner has been creating an art world of his own.

The woman’s feet are bare, though her arms are covered in opera-length gloves. She turns away from us, displaying a shapely back, draped in a slim red ball gown. Her right hip tilts toward her male partner, attired in a tuxedo and evening pumps. The well-dressed couple seems to have escaped from a party, or formed a two-person one of their own, as they are dancing, incongruously, on a beach, whose smooth wet sand reflects her toes and his trousers. The horizon is low and the sky foggy. As this setting is apparently somewhere in the British Isles, the glamorous pair is not alone. They are attended by two retainers, a maid for her and a butler for him, each of whom protectively holds an umbrella aloft against the threatening weather. The scene possibly violates the classical unity of time; the servants’ uniforms seem anachronistic, but the woman’s tall, trim body type is contemporary.

In some areas (the sand’s mica-smooth reflections) the painting is slickly illusionistic, though in others (the man’s profile) it is more unevenly executed. The painting also manages to be both conventionally anecdotal (there’s a story unfolding) and enigmatic (but what is it?). Somehow The Singing Butler, a 28-inch-by-36-inch canvas painted in 1992 by Jack Vettriano, became to turn-of-this-century Great Britain something like what Grant Wood’s American Gothic was to the United States a generation ago—a ubiquitous, archetypal, homegrown image onto which every variety of aspiration, emotion, or conviction has been projected. Playwrights have mailed the artist scripts based on imaginary dramas among the figures. Soldiers have written to say that his picture helped get them through the Iraq war. Bereaved families have proclaimed that the painting has consoled them in their grief. Vettriano even received a letter from a man convinced that he had found in the tailcoated, faceless butler the likeness of a long-lost friend. Most experts are baffled by *The Singing Butler’*s wraparound demographic appeal. “Frankly, I don’t get it,” says art historian Kenneth Silver. The London Evening Standard’s contemporary-art critic Ben Luke suggests that the work might tap into a “nostalgia for an age, probably sometime between the 30s and 50s, when men and women behaved and dressed in certain defined ways.”

Vettriano says he made The Singing Butler simply because early on in his career a woman remarked that he was “good at painting beaches,” and because “people in love usually go to the beach.” (If *Butler’*s beach represents a real place, it would probably be the rather gritty shore of Leven, Scotland, which Vettriano frequented as a boy.) Vettriano flanked the couple with servants, he says, “to make the picture more balanced. It’s an uplifting fantasy, and it makes people feel good.” As it turned out, the picture is something of an anomaly in the oeuvre of Vettriano, who doesn’t particularly believe in monogamous romance, and who generally makes do without liveried servants. In both his real life and his art, Vettriano, now 60, is much more attracted to darker moods and palettes and to themes and individuals of a more louche nature.

In fact, Vettriano, anointed “the people’s painter” by the British press, is a man in full command of his fetishes, and he doesn’t mind sharing them with the world. He likes tough, voluptuous Ava Gardner-style brunettes: “Blondes,” he says, “have too much sweetness.” He favors earlobes and necks over the standard T&A. “I’ve painted maybe three or four breasts in my life,” he notes. He is morbidly fixated on lips and nails, lacquered a glossy blood red, and on eyelashes heavily coated with mascara. “I once tried applying it on a girl myself, but my hand was shaking—I got too excited.” Stilettos are required (he bid at auction on a pair of Marilyn Monroe’s), as are garters and some form of corsetry (as his Devotion and The Perfectionist make abundantly clear). “Every woman who knows me knows I will give them underwear for Christmas, and it won’t be conventional,” Vettriano advises. He has fixed ideas about stockings too; hosiery (as seen in Dancer for Money and countless other pictures) must be sheer black and fully fashioned with wide thigh tops, retro back seams, and reinforced heels.

Fortunately for collectors—from Jack Nicholson and Tim Rice to Jackie Stewart—Vettriano’s distinctively autobiographical evocations of feminine sensuality have far more staying power than the one-night stands and paid assignations they often depict. They also come at a far higher price. The auction record for Vettriano, set, of course, by The Singing Butler, in 2004, is $1,340,640, and the artist has raked in huge sums annually for reproducing his signature work on notecards, calendars, jigsaw puzzles, and, as everyone in the U.K. has surely noticed, 12 million posters. *The Singing Butler’*s afterlife began in 1994, when he was approached by a publishing company called the Art Group. “At first I took the high ground and said no,” Vettriano remembers. “But then I thought, Why shouldn’t my paintings be available to the common man for $10?” Recalls Sian Rees, the former creative director of the Art Group, who praises Vettriano’s sense of “escapism”: “No one predicted the response that Jack’s work created. How could we? It had never really happened before.” Nathalie Martin, Vettriano’s agent, says the response to Vettriano reproductions was “immediate and huge. Sales went through the roof and spread worldwide, very, very quickly.” Counter-intuitively, the more that Vettriano’s images wallpapered the world, the more the reprints sold, and the more the reproductions sold, the higher the prices climbed for the actual originals. Reflects Sian Rees, “The planets aligned, and those circumstances can never really be contrived again.” The income from mass-market Vettriano paraphernalia has been sufficient to finance a Knightsbridge apartment, a studio in Nice—where the sun and women inspire him as they did Matisse before him—and a racehorse, named (naturally) the Singing Butler. Explained Sir Terence Conran, who commissioned a set of sleek automotive-themed compositions for his Bluebird restaurant (they also sell well as reproductions), in Chelsea, “There is a terrific frisson in many of his paintings.”

For Vettriano, an autodidactic ex-coal miner with a Fat Bastard brogue, his current fame and fortune are part serendipitous lark, part revenge fantasy. He picked up his first paintbrush at 22, training himself by obsessively copying Monet, Caravaggio, photos, ads, “anything I could get my hands on.” Most infamously, he copied poses directly from the Illustrator’s Figure Reference Manual—the sourcebook, it emerged, for the dancing couple in The Singing Butler. Vettriano’s detractors considered this revelation, which made tabloid headlines in 2005, proof of artistic fraudulence. “I don’t give a fuck!” he retorts. “Picasso said, ‘Other artists borrow—I steal.’ And the same book I used was found in Francis Bacon’s studio when he died.” When Vettriano-bashers are not accusing the painter of plagiarism, they are vilifying him for churning out, as Scottish art historian Duncan Macmillan phrased it, “dim erotica.” If anything, Vettriano says, his fans (including one adulterous duo who base their kinky encounters on his scenes) are “disappointed that the pictures aren’t pornographic enough.” All this is beside the point to Guardian critic Jonathan Jones, for whom Vettriano’s paintings are, as a group, “brainless”—and for whom Vettriano “is not even an artist.”

At least Vettriano skeptics cannot accuse the prolific artist of sloth. “I like to look at a painting and see labor,” notes Vettriano, who usually works from photographs he himself has staged and shot. His virtuoso effects of moisture and light on flesh, sand, hair, and metal, which often recall the look of vintage Hollywood movie posters or pulp-fiction covers, are accomplished by dragging a small stiff brush through semi-dried, still-tacky pigments—a technique he modestly likens to blending makeup. Not surprisingly, Vettriano venerates the Ruskinian craftsmanship of midcentury American pinup master Gil Elvgren and, “dare I say, Norman Rockwell.” For Vettriano the idea that his easel paintings, which cost between $48,000 and $195,000, are more accurately classified as illustrations is meaningless. “I don’t make a distinction between painting and illustration, and we shouldn’t get hung up on arguing the difference.” He is more acerbically opinionated about the conceptual approaches of such acquisitions-committee darlings as Damien Hirst and Jeff Koons, both of whose hands-off methods he considers “morally corrupt.”

Vettriano’s rejection by the art establishment hurts—the National Gallery of his native Scotland too had snubbed him—but he has quietly taken matters into his own dexterous hands. “He has created his own little industry,” Ben Luke observes. Not only has he founded a publishing company, which, taking over from the Art Group, generates copyrighted, Vettriano-brand catalogues, greeting cards, and prints, he has also helped establish a London gallery, named Heartbreak—a condition with which he is intimately familiar. “I chose the name because I work better when distraught or disappointed,” observes Vettriano, who has just curated his 20-year retrospective, to open in Glasgow next year. In addition to showing his own work, “the gallery will help promote edgy, younger artists”—at least those possessing a sexy, Vettriano-esque sensibility. “Showing landscapes and flowers doesn’t interest me.” But igniting a new Vettriano-fueled art movement just might. “I’m trying,” he explains, “to start a fire.” Proposes Ben Luke, “Vettriano has assembled his own worldview out of visual elements. And that is the right of all artists.”