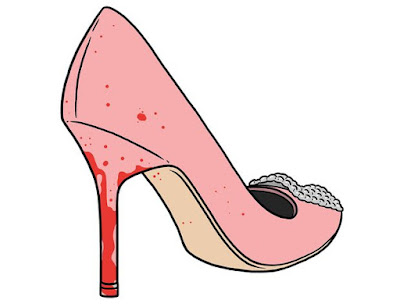 
I
f you asked how it began, I would have to say it was when I noticed that 50 Shades of Grey had sold millions of copies without having any recognisable plot. As I sat at my desk in the top London auction house where I worked as an assistant curator, it occurred to me that if I could combine having lots of sex with some action, then I might be on to a winner.

After a day in which I had yet again been persecuted for being working class, I was ready for some action. So when I bumped into an old school friend, Leanne, on my way home and she invited me to join her as an escort at the Gstaad Club in the evenings, I had little hesitation in accepting. Cue long digression about how much I like fucking complete strangers.
“You’re sacked,” said Rupert, after I had done some independent research into a Stubbs that was to be sold at auction. Could losing the job for which I had strived so hard have anything to do with the fact that I knew it wasn’t a real Stubbs and that Rupert was trying to pull a fast one?
There was only one thing for it. Graphic sex. “Come on,” I said to Leanne. “We’re going to Nice with the extremely fat James who pays me £3,000 a night to drink Cristal with him.”

That night I changed out of my Miu-Miu and into my Prada before slipping into my Chanel. Pert breasts, split-crotch panties etc. After reluctantly tending to James’ miserable cock, Leanne and I went out to party. “He’ll sleep for days now I’ve spiked his drink with barbiturates,” I said.
“Oh dear, he seems to have died,” Leanne said as we returned to the hotel.
“Never mind,” I replied. “You fly back to London, I’ll pocket the €10,000 I found in his wallet and nip down to Italy and nobody will be any the wiser.”
Portofino was warm, so I bought myself a Dolce & Gabbana bikini and a Versace towel and strolled along the marina. “You look like you’re very rich,” I said to Steve the billionaire, making sure he caught sight of my neatly shaven pussy.
“Actually, I’m not that into women,” Steve the billionaire replied. “But why don’t you come and join me for a month or two while we cruise round the Med? There will be plenty of strangers for you to fuck so your narrative flow won’t be interrupted.”
After 100 pages of doing nothing much but exposing myself and having anonymous sex that made me very wet etc, I ended up in Rome. There I discovered that Rupert was planning to sell the Stubbs to the mafia for $3m, so I quickly murdered the mafia middle-man and pocketed the lot.
“Isn’t it a bit of a stretch to ask readers to believe you’ve become an accomplished international assassin?” asked Leanne.
“I have as much contempt for them as I do for you,” I replied, driving my Manolo heel through her temple.
Having murdered a couple of other people, I settled down to show how much I knew about art by writing down the first paragraph of the Wikipedia entry on Artemisia Gentileschi.
“Let’s go shopping at Inès de la Fressange,” said Renaud, a stunningly attractive man with a happy, smiling cock. “And then I will fuck you in the arse.”
“Can we ease up on the botty action?” I replied. “I’m a wee bit sore.”
“Fraid not. It’s a must in this kind of book. You’re wanting it, you’re loving it, you’re getting it. By the way, your bum tastes of oysters.”
After the most amazing anal sex, glistening hardness etc, I killed Renaud and decapitated him. Only another international assassin sent to kill me would have known my bum tasted of oysters.
To be continued. Sadly.