Juan Goytisolo / Forbidden Territory / The decadence of a remembered world 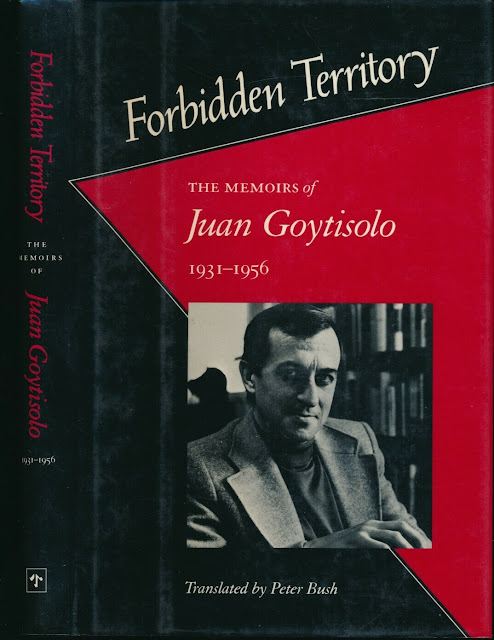 THE DECADENCE OF A REMEMBERED WORLD

By WENDY GIMBEL; Wendy Gimbel is a writer and critic who lives in New York.


FORBIDDEN TERRITORY The Memoirs of Juan Goytisolo, 1931-1956. Translated by Peter Bush. 235 pp. San Francisco: North Point Press. $18.95.
To the son of a Spanish merchant, securing an eternal reward represented the highest possible return on investment. From Pope Leo XIII, Juan Goytisolo's grandfather purchased a plenary indulgence ''in articulo mortis'' (on the brink of death). However blemished their souls, three generations of Goytisolos would go straight to heaven. Unfortunately, there was nothing the patriarch could do to insure their happiness on earth. In his memoir, ''Forbidden Territory,'' faithfully translated by Peter Bush, Juan Goytisolo charts the disintegration of his family - roots jeopardized, branches rotting - against the devastation of Spain in the 20th century. For this writer (whom Carlos Fuentes has called Spain's leading novelist), the Vatican guarantee might as well have been a promise of hell.

Writing about his early life (the years between 1931, when he was born, and 1956), Mr. Goytisolo defines himself in relationship - sometimes loving, often adversarial - to the narrow world in which he grew up. The story's dual structure, a straight narrative in counterpoint to a didactic interior monologue, reflects the ambivalence he feels about his origins. In one voice, Mr. Goytisolo simply tells the bourgeois story. But in another, one that borders on the self-righteous, he condemns the decadence of this remembered world. Reading the memoir becomes rather like leafing through a family album with a Grand Inquisitor looming over your shoulder.
Mr. Goytisolo imagines his family in a succession of photographs he finds difficult to absorb into the fiction of himself. From faded tobacco-colored prints in an album, he reimagines the grandeur of the 19th-century past - the Goytisolo nameplate on railroad cars laden with sugar cane, the sumptuous house in Cienfuegos - images of the Cuban adventure of his great-grandfather. Don Agustin's sugar refinery generated the fortune frittered away by the family's lavish eccentrics: dissipated great-uncle Ramon, who produced his own Catalan version of the ''Rubaiyat''; great-uncle Juan, who reserved special trains to shuttle his guests to a country lunch; mustachioed Aunt Trina, who looked like a guardsman and surrounded herself with a band of greedy churchmen.
The photograph of his own mother - an elegant stranger wrapped in a fur boa - becomes the dominant image of his childhood. On March 7, 1938, when Mr. Goytisolo was 7, this mother of four was killed by Mussolini's bombs that pounded the streets of Barcelona. He would see her again only in his mind, an eternally young woman in high-heeled shoes clutching a bag of presents for her children. Years later, watching a documentary on that bombing, Mr. Goytisolo wonders whether he will be a spectator at her death. Will an indifferent, panning camera be the agent of their posthumous reunion? At the same time, he questions whether his few remaining memories of her have any reality. He shares the Proustian realization that what is remembered is not at all the same as what has occurred.
With his mother's death, Mr. Goytisolo sees himself as a child of the Spanish Civil War. During much of the Franco dictatorship, he and his family suffocate in a dark house in Barcelona. In his mind, he replaces the photograph of his mother with one of his grandfather - an old man napping in the shade of a chestnut tree. At night, this gentle figure becomes a molesting intruder. Slipping into his grandson's bed, he fondles the boy until his own desire is satisfied. Many years later, Mr. Goytisolo searches for a connection between that incident and the formation of his own bisexual identity. In love with a French woman, even sexually committed to her, he still combs the streets for an erotic homosexual liaison. Part of that nocturnal legacy - the equation of eroticism with the forbidden - has become essential to his sexual identity.
Like most budding novelists, the young boy experiments with language, discovering as he does its power to create alternate worlds. If history is a villain, he can conquer it with words. His schoolboy novel of Joan of Arc rescues the saint from an expected death on Bishop Cauchon's bonfire and consigns her instead to Robespierre's guillotine. In ''Count Julian,'' the trilogy of his maturity, Mr. Goytisolo's words reverse the course of Spanish civilization. In a Tangier library, a Catalan exile crushes dead insects into the pages of a Spanish chronicle. Helped along by a whiff of Indian hemp, he invents a more desirable history for his country, that ''foul stepmother'' across the straits. Supported by Arab hordes, the legendary Julian (last seen in the eighth century) reinvades Spain and conquers this contemporary land of canned flamenco and commercial bullfights. ''Count Julian'' shares with the childhood story of the guillotined Joan a realization that the past can be manipulated. When real events are intolerable, one can - indeed, one must - reimagine them.
Mr. Goytisolo has called the writing of a memoir an examination of conscience - a secular substitute for the sacrament of confession. While his definition captures the spirit of much of the writing, it falls short of explaining why this memoir is so moving. ''Forbidden Territory'' dramatizes a child's attempt to construct his small world while the larger one comes tumbling down about him. It is against wanton destruction that Mr. Goytisolo writes; at least that is the most powerful effect of his memoir. And beneath his anger at the dreadful ruin, there lies a belief in human survival that is immensely reassuring. WHAT IS A MEMOIR?
Awareness of the complete inanity of the enterprise: amalgam of your motivation and inability to make up your mind about your aim and would-be destination: a lay substitute for the sacrament of confession?; an unconscious desire to justify yourself?: to make a statement that nobody asks you for?: a statement for whom, from whom?: for you, everybody else, your friends, enemies?: the wish to make yourself better understood?: to awaken feelings of affection or pity?: to feel yourself accompanied by future readers?; to struggle against the oblivion of time?; purely and simply an exhibitionist impulse?: impossible to answer these questions and yet attack the task, the daily torture of confronting the page, putting your life on the drawing board, the unmentionable material reality of your body, not the one hidden by masks and disguises in daily ritual farce. From ''Forbidden Territory.''
TNE NEW YORK TIMES