David Bailey / This much I know / Cockneys don´t cry 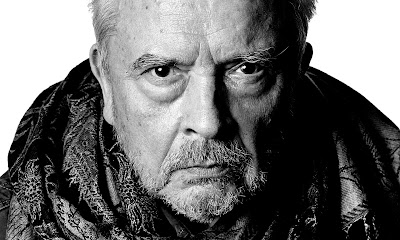 David Bailey: 'Cockneys don't cry. It's not for me, all that whingeing and moaning'


The photographer, 76, on class snobbery, the importance of body language, and being an outsider

My two biggest influences are Walt Disney and Picasso. I was six years old when the local cinema in Upton Park was bombed by a V2. I was so pissed off with Hitler. I thought he'd killed Bambi and Mickey Mouse.

I spent my childhood in a state of embarrassment because I couldn't spell. I was severely dyslexic and didn't learn to read until I joined the Air Force.
You always get stuck with where you began. People think of my days in the swinging 60s, regardless of what I've done in the following 50 years.
The 50s was the worst decade I've lived through. It was grim. The soundtrack was cracking glass – everywhere you went, there was broken glass. At least people had fun during the war in the 40s – there was a general attitude of: "Why not do it tonight? We could all be dead tomorrow."
I don't know why they let me in at Vogue [in 1960]. Back then they didn't even use models who were working class. The number of times I heard: "Oh no, we can't shoot her, have you heard her speak?" It was class snobbery of the highest order. I think I got in because the art director [John French] was gay. We were both outsiders and that's why he kept me.
The thought of eating flesh makes my stomach turn. My dad thought I was queer when I stopped eating meat at 12 and refused to play football.
I'm not sure what art is. I couldn't describe it. It's like love – sort of ethereal.
Waking up makes me happy. I'm still here! I rise with the larks. I like the light the morning brings and feel I've lost the day if I miss it.
Cockneys don't cry. It's not for me, all that whingeing and moaning. And it annoys me when others do it. Get over it! Things could always be worse.

We live, we grow old, we die. I don't want to go, but I am curious to see what happens.
Political correctness is a form of mind control. We all have the right to think, and say, what we want.
My wife has never lost her mystery. I'm sure that's why we've been married for so long. I'm still crazy about her. I loved my other wives – Penelope Tree, Catherine Deneuve, Marie Helvin – but not in the same way as Catherine [Dyer].
I wish I had more empathy. I tend to see things as they are. If a friend says, "My girlfriend's left me," my first reaction is, "Find another one". I don't understand why people make a fuss over something they can't control.
You can tell a lot about a person by the way they move. Body language says more than what someone can verbalise. Some people are more erudite and articulate than others, but that doesn't mean they're more interesting or valid.
My greatest fear is that my dick will drop off. It's every man's worst nightmare if they're honest.

Posted by Ficciones at Saturday, February 15, 2014

Email ThisBlogThis!Share to TwitterShare to FacebookShare to Pinterest
Labels: David Bailey, Photographers, Shahesta Shaitly, This much I know