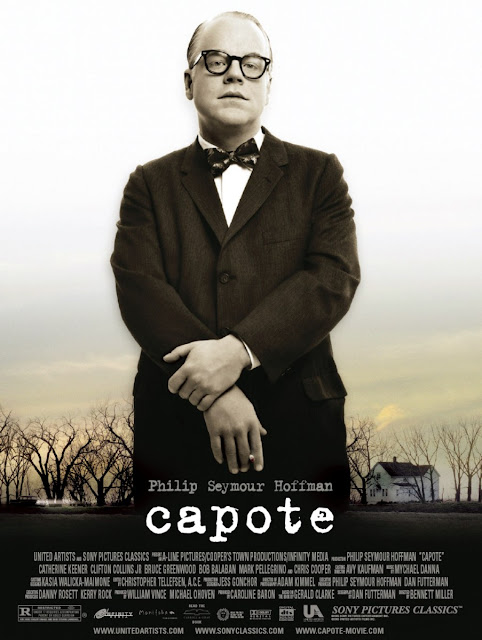 Capote adds more half-truths to the murky story behind

The late Philip Seymour Hoffman gave an astonishing performance as Truman Capote, but Bennett Miller's film about the Clutter family murder is as historically sketchy as the book 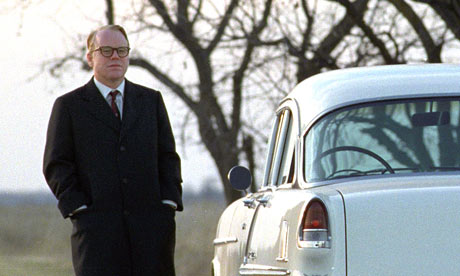 'Astonishing' ... Philip Seymour Hoffman in Capote, 2005 Photograph: /The Kobal Collection
Capote (2005)Director: Bennett MillerEntertainment grade: A–History grade: C–
Truman Capote's In Cold Blood was a "non-fiction novel" about the murders of a farming family in Kansas in 1959. Bennett Miller's film Capote tells the story of the book's genesis. The late Philip Seymour Hoffman won his only Academy Award for Best Actor for his astonishing performance in the title role.

Truman Capote (Philip Seymour Hoffman) and his friend Harper Lee (Catherine Keener) travel from the literary salons of New York City to the wilds of Kansas to investigate the murders. According to Capote's biographer and friend Gerald Clarke, on whose book this film is based,Hoffman was more like Capote on screen than Capote himself. "Through the alchemy a very few gifted actors possess, he has done more than impersonate Truman," he said. "For the length of the movie, he has resurrected him." Hoffman's exquisite Capote placed him in the tiny, select club of actors who have played extremely familiar historical figures so well that audiences may forget they're not watching the real thing. Others include Forest Whitaker as Idi Amin in The Last King of Scotland, and Bruno Ganz as Adolf Hitler in Downfall. 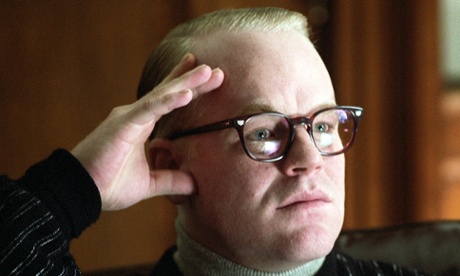 'He has done more than impersonate Truman ... he has resurrected him' ... Philip Seymour Hoffman as Truman Capote. Photograph: Attila Doroy/AP

When two suspects – Perry Smith and Dick Hickock – are arrested and tried, Capote visits the warden of the jail in which they are being held, and requests unlimited visits. To forestall any objection, he hands an envelope stuffed with cash to the warden.
The only evidence for Capote having bribed his way into Death Row is a quote (unattributed, but apparently from Capote) in Clarke's biography: "I went for broke and asked for an interview with this behind-the-scenes figure, who was a man of great distinction and renown in that state. 'I'll give you ten thousand dollars if you can arrange this,' I said. … I guess my offer was very tempting, and he just nodded his head."
Bearing in mind that Capote was often reluctant to let the facts get in the way of his best stories, it's reasonable to have doubts about this one. It is known that he engaged a legal firm called Saffels & Hope to negotiate his access deal – over, not under, the table – with the governor of Kansas.

The film slowly peels away the protective layers Capote has carefully draped over himself, revealing that, at base, all he cares about is getting his story. "I'm going to help you find a proper lawyer," he tells Smith. "You need a serious lawyer for the appeal." The film returns several times to Capote's promise of helping the suspects' legal defence. This is one of its most striking untruths. There is no evidence Capote ever offered to help Hickock and Smith find a lawyer. 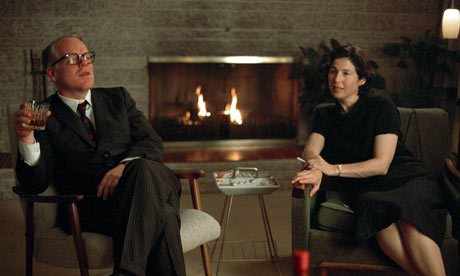 This change, like most in the film, is made with a purpose: to demonstrate Capote's manipulation of his subjects. It is true that he lied to them to get what he wanted. In real life, he did not spend days and weeks with Smith, as the film implies. Most of their relationship was conducted by letter. Yet the film does capture and explore the peculiar tenor of that relationship. The powerful scene in which the betrayed Smith yells at Capote, "What's the name of your book?" is based on a letter the real Perry Smith wrote to Capote on 12 April 1964: "I've been told that the book is to be coming off the press and to be sold after our executions. And that book IS entitled 'IN COLD BLOOD.' Whose [sic] fibbing?? Someone is, that's apparent." 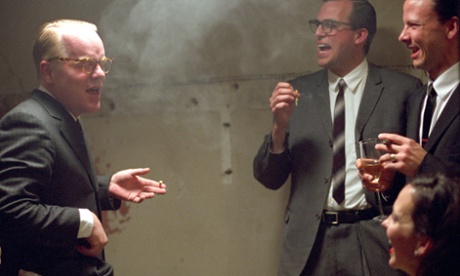 As Smith and Hickock's legal appeals grind on, Capote begins to see himself as the real victim of this case. He cannot finish the book until his protagonists are executed: a moment he hopes will provide a sensational ending. "It's torture," he tells Lee. "They're torturing me." With delicious subtlety (at least, until a slightly too heavy-handed last line of dialogue), the film makes you wonder whether the most cold-blooded person on the screen might not be Truman Capote himself.

Capote is a great movie about writing non-fiction, with an exceptional leading performance – but, for anyone concerned that In Cold Blood itself already took a few liberties with the truth, the film only adds more mythology.

Posted by Ficciones at Saturday, February 08, 2014