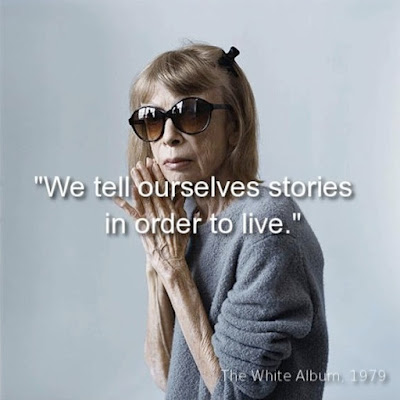 From literary heavyweight to lifestyle brand: exploring the cult of Joan Didion

The pioneer of New Journalism is used to sell biker jackets and clutch bags. What a pity she’s quoted more than she’s read 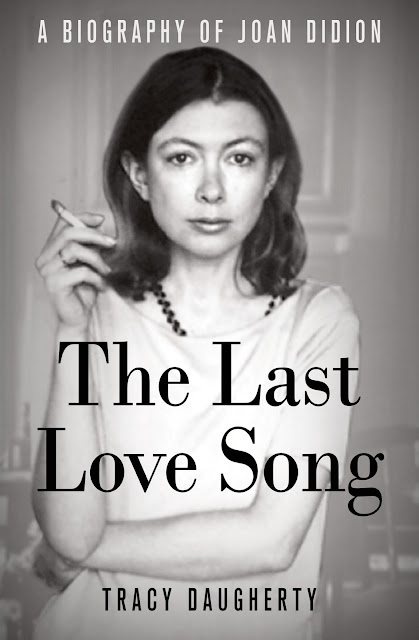 M
aybe every writer is doomed to have their tritest sentence become their most-tweeted, but in Joan Didion’s case, it feels particularly unfair that “we tell ourselves stories in order to live” has become so ubiquitous. The line begins the eponymous essay of 1979’s The White Album, titles her volume of collected non-fiction published in 2006 and now is the name of a forthcoming Kickstarter-funded documentary, directed by her nephew, Griffin Dunne. Its most terrifying stranglehold, though, is online, where it spawns and respawns itself across social media platforms.

I’m not sure Didion, whose reputation rests on seizing and scrutinising so many historical moments, has ever not been “having a moment”, but we seem to have reached peak Cult of Joan. She is now that oxymoronic phenomenon, “a literary celebrity” and a forthcoming biography, Tracey Daugherty’s The Last Love Song, will only further deify her. But being a literary celebrity is not the same thing as being a widely read writer. And the endless iteration of the sententious “we tell ourselves stories in order to live” seems to be a testament to that.
The essay that follows that line is basically a repudiation of any consolation the words may have held. It’s about how we delude ourselves with stories, rather than a paean to the vital, life-giving force of Literature with a capital L. She’s never soothing or simple; Didion’s intellectual severity and honesty preclude that. The White Album details both her own neurological disorder and the disorder of Los Angeles at the end of the 1960s, both of which suggest to her that “all narrative was sentimental [...] all connections equally meaningful, and equally senseless”. That life, in other words, is not a thing reducible to something as epigrammatic as the essay’s first sentence.
It’s not her fault that Didion has always struck the fashion world as irresistibly on-brand. It’s also worth noting that being sylphishly photogenic and being an intellectual titan are not mutually exclusive. But, in recent years, the fashion industry’s Didion adoration seems to be making her more a style symbol than a person who has written some excellent books.
You can buy a leather motorcycle jacket with Didion’s face on the back. Or rather, you can’t, because it’s sold out and even if it wasn’t, you’d still need $1,200. There exist sequinned clutch bags designed to look like The White Album. Didion merch, in fact, is now enough of a thing for Gawker to despairingly describe her as“Joan Didion, an ever-more popular lifestyle brand”. This seems to be part of a broader tendency to fetishise and fashionise books and bookishness – it’s what Christine Smallwood identified last year as “the merchandising of reading” and what you might also call the lifestyle-ification of literature. All the tote bags, T-shirts, magnets and buttons are, Smallwood suggests, the result of a reading minority who’ve become, as the numbers of Americans who read books continues to decline, “a bit overidentified with the enterprise.” There is, she added, “a curiously undifferentiated flavor [to it], as if what you read mattered less thanthat you read.” Similarly, the name and image of Joan Didion seems in danger of eclipsing her actual work.
In January, the Joan-Didion-for-Céline ad launched and my Instagram feed became a weird kind of vertical zoetrope of the same image: Joan in her white bob and big black shades, the only perceptible expression on her face that subtle, shrewd tightening of the lips. An 80-year-old female intellectual was now a model and “brand ambassador” for an impeccably cool, high fashion house’s spring/summer campaign. Vogue, one of Didion’s first employers, for whom she wrote the spectacular and enduring essay On Self Respect at a moment’s notice, when another writer flaked,did not contain themselves: “Did you just feel the collective intake of breath shared by every cool girl you know? Did you feel the pulse-quickening vibrations of every recent college grad and literature fan? Did you sense the earth trembling beneath your feet?”

The earth didn’t tremble, but I did smile when Didion gave an imperturbable non-comment of a comment to the New York Times. Asked if she was “aware of the sensation she caused”, she responded, “I don’t have any clue.” Asked whose idea it was, she replied, “They got in touch with me.” There you go. As chic and flat and impenetrable as the black sunglasses she wears in the ad.
Didion, though, deserves so much more than being a droppable name for “every cool girl you know”, or a meme-friendly symbol, flashed by the fashionable and fashionably disaffected to gird their intellectual credibility. Tumblr and Instagram are dense with a certain handful of images: Joan lounging in front of a white Corvette, Joan hanging out the window of the Corvette and now, of course, Joan in her white bob and big black Celine shades. I love these images too, but every time I see them, I hear a querulous voice inside me. It frets that Didion is precious not because she looks so chic in front of that white Corvette, but because of her perfect sentences and the hard-thinking mind that made them.
Our conception of 1960s and 70s America exists, in large part, due to Didion. The subjects made culturally-canonical under her scrutiny include Las Vegas weddings, the vagueness of Joan Baez’s idealism, and, most famously, the counter-cultural movement that had its densest population of hippies in San Francisco. Then, in 2005, she did the same for grief with her memoir The Year of Magical Thinking, a terrifyingly lucid account of losing her husband, John Gregory Dunne. The book became an international bestseller and, in 2007, a Broadway play with Vanessa Redgrave as its sole performer.
Didion, born in 1934 in Sacramento, was conservative in her attitudes (she came from a family of Republicans and, in 1964, voted for Barry Goldwater, the staunchly anti-communist “Grand Old Man of the Republican Party”). Her mode of remove extended to feminism and, by her own admission, she felt, “radically separated from most of the ideas that seem to interest other people.” Her 1972 essay The Women’s Movement – a bit of a sore point for a new, happily feminist generation of Didion lovers – assails “the invention of women as a “class”” and mocks “the eccentric and quixotic passion” of American Marxism in which “the have-nots, it turned out, aspired mainly to having.” Didion, who now resides on Manhattan’s genteel Upper East Side in a “cavernous” apartment, would, of course, be placed firmly in the latter category.
Nonetheless, there is an undeniable feministic power in her simply being a woman who has always given her writing supreme primacy. She was, arguably, the most talented pioneer of New Journalism, the movement which infused reportage with literary technique. Even the swaggering Brat Packer Bret Easton Ellis has admitted that, “I would rewrite paragraphs of hers just to see how she would do it.”
If the white Corvette drives people to finding those sentences, excellent. But I so hope they know that there’s much more to her than telling ourselves stories in order to live.
Unlike some other hugely influential writers, Didion’s shadow doesn’t retroactively diminish her. Compare the clause-heavy, abbreviated prose of David Foster Wallace’s many acolytes’ work. Wallace, also one of that small number of “literary celebrities” – and also a writer subjected to fresh reification, Jason Segel plays him in the new film The End of the Tour – was one of the greats but his highly imitable style has made his own work seem almost self-parodic. If, however, there is such a thing as a Didion-idiom (“Didiom”?) it’s something so elegant, unpredictable and exacting as to be impossible to impersonate.
The problem of the Cult of Joan and her inimitability seem to come together in a passage from Slouching Towards Bethlehem, her seminal essay on hanging out with the young dropouts and self-styled radicals of 1967’s Haight-Ashbury. Among them is Barbara, who “dislikes earning more than 10 or 20 dollars a week” and prefers, instead, to show her love by baking for the household. She calls this “the woman’s trip”. There follows a typically cool Didion evisceration of Barbara’s delusion: “Whenever I hear about the woman’s trip, which is often, I think a lot about nothin’-says-lovin’-like-something-from-the-oven and the Feminine Mystique, and how it is possible for people to be the unconscious instruments of values they would strenuously reject on a conscious level, but I do not mention this to Barbara.”
Whenever I hear that we tell ourselves stories in order to live, I wonder if the Cult of Joan is too many Barbaras, telling themselves stories.
THE GUARDIAN

Posted by Ficciones at Thursday, December 17, 2015