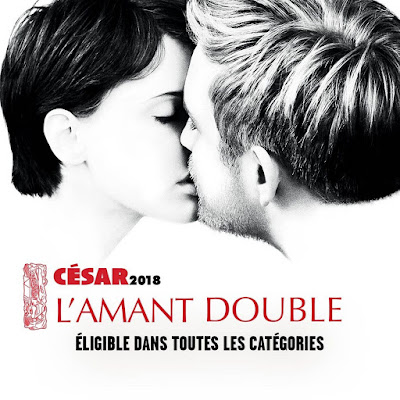 
I
s there a director currently working who is as effortlessly versatile asFrançois Ozon? Or as fluent in the language of cinema? To go from the wistful painterly restraint of the post-first-world-war drama Frantz to the pulpy perve-fest mind games of L’Amant Double, and to bring the same exquisite level of craft to both – Ozon is a director whose unabashed pleasure in his medium is infectious. And it’s this – the juxtaposition of effortlessly rarefied film-making techniques with a deliciously schlocky premise and its collision of kink and crazy – that makes L’Amant Double such a turn-on.

The story – a disorienting deep dive into the subconscious and the sexual fantasies of a fragile young woman – wears its fetishes as boldly as any Hitchcockian corsetry. Chloé (Ozon’s Jeune & Jolie muse Marine Vacth) visits psychologist Paul (Jérémie Renier) for treatment of psychosomatic aches. She falls in love with him, but shortly after they move in together she discovers that he has an identical twin, Louis, also a therapist. Tellingly, while there is a neat symmetry to Chloé’s therapy sessions with Paul, in Louis’s consulting room, they are never in focus at the same time. Their inevitable affair – a power struggle between the sheets – allows Chloé to explore elements of her sexuality that had hitherto lain dormant.
Dualities run through the film, both thematically and visually: good and bad, sub and dom, black and white. Ozon splits his screen using mirrors and reflections, and hides “twins” – both in the frame (pairs of orchid stems, a double lamp) and in the story (two cats have key roles).
The film, which is based on a novel by Joyce Carol Oates, nods to Hitchcock in everything from the score to the use of a Vertigo-style spiral staircase, which tips us off-balance. And, in the body horror and the twin-fetish plotline, there is an obvious debt to David Cronenberg’s Dead Ringers. But the skin-tingling subversion of the erotic thriller premise is all Ozon.