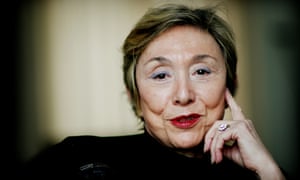 It was claimed thatJulia Kristeva worked for the communist-era secret services under the code name ‘Sabina’. Photograph: Graeme Robertson for the Guardian

Renowned psychoanalyst and philosopher alleged to have become collaborator in 1970s

Renowned psychoanalyst and philosopher alleged to have become collaborator in 1970s

The renowned Bulgarian psychoanalyst and philosopher Julia Kristeva worked as an agent and collaborator with the Balkan country’s secret services during the communist era, a state commission has claimed.

Kristeva, 76, is the author of more than 30 books and worked alongside leading French intellectuals such as Jacques Derrida, Jacques Lacan and Roland Barthes.

The Bulgarian commission that identifies people who had worked for the communist-era secret services alleges that Kristeva, under the code name “Sabina”, had been a collaborator for the first department of the Committee for State Security. The department oversaw intelligence in the area of the arts and mass media.

It said she began working for the state security organisation in 1971. She had moved to Paris in 1965 on a French government scholarship. The document did not say how long she had worked for state security or whether she had received any payment.

Kristeva, who still lives in Paris, was not immediately available to comment on the matter.

In its heyday, Bulgaria’s state security, working closely with the Soviet KGB, operated a network of about 100,000 agents and informers. It was dissolved in 1989 following the collapse of the communist regime.

The issue of access to, and publication of, its files has continued to raise powerful emotions in Bulgaria during its difficult transition to democracy.

Foreign Policy magazine has ranked Kristev as one of the 100 greatest thinkers of the 20th century. As well as books on psychoanalysis and philosophy, she has written extensively on cultural and feminist issues and is also a novelist.