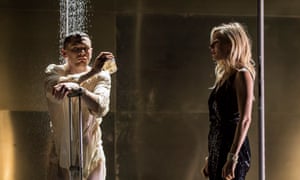 Washing away the guilt … Jack O’Connell and Sienna Miller in Cat on a Hot Tin Roof, directed by Benedict Andrews. Photograph: Johan Persson

Apollo, LondonBenedict Andrews’s radical update of the classic delivers emotional intensity shot through with humour – and a blistering performance by Jack O’Connell

This is a classic example of director’s theatre. It has three estimable stars in Sienna Miller, Jack O’Connell and Colm Meaney, but all the talk is likely to be of what the director, Benedict Andrews, has done with Tennessee Williams’s play. As we know from Andrews’s work at the Young Vic, which is presenting this show in the West End, he is a major force and some of his ideas are illuminating, but I still feel this is a play that should belong to its performers.

Andrews and his Swiss designer, Magda Willi, have taken some radical decisions. They banish scenic realism, so there is no hint that we are in a vast Mississippi delta mansion (“Victorian with a touch of the far east,” says Williams of Brick’s bedroom): instead they seize on the constant reference to cages to present us with a gold-plated prison. It is dominated by a bed and a shower, extensively used by a naked O’Connell as if to cleanse himself of his deep-rooted guilt. The action is updated to the present, with frequent use of mobile phones. This strikes me as questionable since, in the era of same-sex marriage, you feel the characters would be less shy about discussing Brick’s ambivalent relationship with his dead friend, Skipper.

The best feature of Andrews’s production is that it combines emotional intensity with a leavening humour. You feel the tension between Brick, a star athlete who has retreated into alcoholism, and his wife, Maggie, who yearns for the sexual pleasure they once enjoyed. As the characters kick at a birthday cake or hurl ice cubes about the stage, we also get a sense of the desperation surrounding the inheritance of the dying Big Daddy’s estate. Andrews appreciates that Williams was a comic writer. Big Daddy’s grandchildren – from Brick’s brother, Gooper, and his wife, Mae – are rightly seen as gaudily overdressed monsters strategically deployed by their parents.


Of the three main performers, however, the only real revelation comes from O’Connell’s Brick. He has the obsessiveness of the true alcoholic, his attention rigidly fixed on the four whiskey bottles prominently placed downstage. He also suggests the inwardness of a man locked into his own private world and still tormented by his denial of Skipper’s love and his own furtive wish to reciprocate it.

With Maggie, the bar is set high after stunning performances by Lindsay Duncan in the 1988 National Theatre revival and Sanaa Lathan in Debbie Allen’s all-black 2009 production. Miller gives a perfectly creditable performance and makes good use of her body: shedding her dignity, at one point she crawls towards Brick on all fours, with her posterior arched in the manner of a cat on heat. Her voice, however, doesn’t quite have the colour and range for Maggie’s demanding first-act litany of grievance. Meanwhile, Meaney clearly understands, intellectually, Big Daddy’s combination of rednecked Mississippi vulgarity and fear of encroaching death. All he lacks is the instinctive physical power that James Earl Jones brought to the role.

There is good support from Lisa Palfrey as a minidressed Big Mama, riding with the verbal punches, and from Hayley Squires as the eagerly acquisitive Mae, and newcomers to the play will get a sense of its stature. But, while Williams’s study of the conflict between truth and illusion may be timeless, it works best when rooted in the detailed realism of the American South in the 1950s.
THE GUARDIAN