School’s back in, so sharpen your pencils and study our list of eminent educators, from the inspirational to the irredeemable. No sniggering at the back 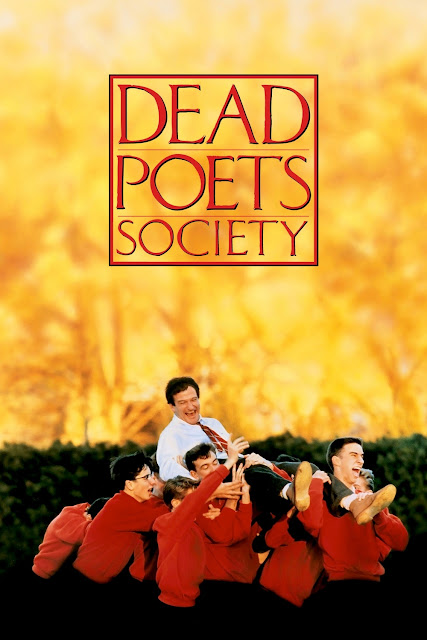 from Dead Poets Society
One of the late Robin Williams’s most affecting and less mawkish studies in child-men (of which Patch Adams remains the acknowledged nadir), John Keating is the quintessential inspirational English teacher who shakes up his charges at a buttoned-up late-50s Ivy League-style academy by having them rip out the introductions to their poetry primers and clamber on their desks to “sing the body electric”, while he exhorts them to “seize the day boys, carpe diem, make your lives extraordinary”. “Middlebrow high-mindedness,” harrumphed Pauline Kael, but it left a generation of men unable to hear the words “O captain, my captain” without finding that they had, you know, something in their eye.

There are plenty of bad teachers in the canon – Cameron Diaz, in the movie of the same name, is just the lamest – but Mr Garrison is truly transgressive. His puppet, Mr Hand, is less a “teaching aid” than an outlet for the racist and homophobic raging of his id; after coming out, he indulges in front-of-class S&M horseplay with his friend Mr Slave; and in the season 9 premiere, he undergoes gender reassignment surgery to become Mrs Janet Garrison, reverting to manhood three seasons later (enjoying a brief flirtation with lesbianism and an even briefer marriage to Richard Dawkins in the interregnum). His class on evolution – “you’re the retarded offspring of five monkeys that had butt sex with a fish-squirrel” – epitomises his no-holds-barred approach.

from The Prime of Miss Jean Brodie

Muriel Spark’s Miss Brodie is the apotheosis of the teacher-as-charismatic-cult-leader strain in literature, from Socrates to Julian Morrow in Donna Tartt’s The Secret History. An enigmatic spinster at a conservative girls’ school in 1930s Edinburgh, she celebrates her “prime” by hand-picking a bunch of elect pupils to mould into the “crème de le crème”, via an appreciation of the rarefied delights of drama, art and incipient fascism (she’s an early admirer of Mussolini and Hitler). One of her charges compares her to a Calvinist deity (“she thinks she is Providence... the beginning and the end”), but Miss Brodie herself sounds more Jesuitical: “Give me a girl at an impressionable age, and she is mine for life!”

It’s safe to say that Dan Dunne is not your average middle-school Brooklyn history teacher. He rejects the standard curriculum in favour of an approach based on dialectical materialism; he snorts and freebases cocaine in his spare time; and he’s played by Ryan Gosling, doing that soulful middle-distance stare thing before it became a worldwide sensation and the spawn of a million “Hey girl” memes. When his life collides with a student who’s dangerously close to the orbit of a local drug dealer, the first law of Engels’s materialist dialectic – the conflict of opposites – gets plenty of play, in a stoned/straight, criminal/conformist, employed/fired kind of way.

Bridget (“the Midget”) McCluskey, played by Gwyneth Powell, was headteacher ofGrange Hill, the BBC school soap that brought smacked-out pre-teens to teatime screens in its 1980-1991 heyday. She endured years of trashed toilets and “we’re sick of being treated like little kids”-style whining from the post-Anna Scher pre-Eastenders cast of Pogos, Boogas and Grippers, and a profusion of elaborately power-shouldered and pussy-bowed outfits that grew increasingly Thatcherite, an influence Powell was happy to acknowledge: “We were both power dressers, and I think her role definitely reinforced my own.” Just say no, Mrs M ...

If anyone can overcome the sullen adversity of a bunch of inner-city proto-gangstas, it’s... Michelle Pfeiffer? That’s the basic premise of this hokey fable, in which Pfeiffer’s ex-marine-turned-high-school-grunt dons a leather jacket and shows off her karate moves to prove her street chops. It’s (very) loosely adapted from LouAnne Johnson’s real-life memoir My Posse Don’t Do Homework, with Pfeiffer, scathingly nicknamed “white bread” at the outset, eventually winning hearts and minds, not with shock and awe, but with bribes (candy bars and trips to theme parks) and Dylans (lyrical analysis of Mr Tambourine Man and Do Not Go Gentle Into That Good Night). This provokes jingle-jangle mornings for the far-from-dope authorities, and a student’s deathless line when Ms Johnson’s dismissal is mooted: “But you can’t leave us – you’re our Tambourine Man!”

from To Sir, With Love

Probably the most enduring example of teacher-as-stoic, this late-60s blackboard jungle melodrama finds Sidney Poitier’s Mark Thackeray arriving at a “tough” East End sink-school (by way of British Guyana and California) and countering Bash Street Kids-style pranks and ostracism with an unassailable triple-whammy of rectitude, honour and integrity. One reviewer claimed that “the sententious script sounds as if it was written by a zealous Sunday school teacher after a particularly exhilarating boycott of South African oranges”, but the film’s title song, sung by Lulu (who played Barbara “Babs” Pegg), remains the most ardent of odes to the educator’s profession (if disturbingly equivocal on the fraught matter of teacher-pupil relationships): “A friend who taught me right from wrong/And weak from strong/That’s a lot to learn, what can I give you in return?”

Edna Krabappel is another familiar classroom archetype; the vastly overqualified teacher, ground down by existential and amorous disappointments, and reduced to phoning it in to her feckless students and unworthy lovers. Her bitterness and disdain is exemplified by her dismissive, one-syllable response – “Ha!” – to any unwonted flicker of intelligence or initiative from Bart Simpson and co, and her chain-smoking, soup-for-one wine-for-three travails aren’t much assuaged by an affair with Principal Skinner or even a late marriage to Ned Flanders. Edna was “retired” on the death of Marcia Wallace, who voiced the character, in 2013.


“Let any boy speak without leave, and I’ll take the skin off his back.” Yes, Wackford Squeers (the clue is in the name) is all tough love without the love, the exemplar of the sadistic classroom tyrant whose modern descendants range from Jimmy Edwards in Whack-O! to Mr Fletcher, the chair-hurling jazz instructor in Whiplash. Dickens paints the master of Dotheboys Hall in panto-villain colours - “He had but one eye... and the blank side of his face was much wrinkled and puckered up, which gave him a very sinister appearance” – and his establishment as a kind of Dantean abyss where the “pale, haggard, lank, bony” boys are served bowls of brimstone and treacle and subject to cruel and capricious punishments. Not likely to trouble the Ofsted Outstanding Providers list any time soon.

from The History Boys

As incarnated by the late Richard Griffiths, Hector (always addressed in familiar, one-of-the-boys style) is the left-brain, knowledge-for-its-own-sake general studies teacher – drilling his Oxbridge aspirants in the subjective tense in French by having them simulate a scene in a Parisian brothel – whom author Alan Bennett sets up in opposition to Irwin, the right-brain history teacher who urges the boys to provoke jaded examiners with counterintuitive rhetoric. The audience’s sympathies are somewhat stacked in Hector’s favour – his attempts to grope the boys as he gives them a lift home on his motorbike notwithstanding – and his final (posthumous) speech could be a credo for the valour of his profession: “Pass the parcel. That’s sometimes all you can do. Take it, feel it and pass it on. Not for me, not for you, but for someone, somewhere, one day. Pass it on, boys. That’s the game I want you to learn. Pass it on.”