John McGahern / A brief survey of the short story

A brief survey of the short story part 59:


Returning over and over again to the same territory, these bleak but beautiful stories build into a complete fictional world


During his lifetime John McGahern was frequently called Ireland's Chekhov. It's a description that carries the flavour of journalistic laziness, but there is something common to their ability to largely efface themselves from their prose, and their skill at drawing meaning from the lives of everyday rural people: teachers, farmers, labourers and policemen. McGahern clearly learned a great deal from Chekhov, and he even included a tribute of sorts in his story The Beginning of an Idea, where a character struggles with a fictionalised biography of the Russian. But he preferred deflecting the comparison when it arose: "I think there is nothing that Chekhov wrote that isn't wonderful", he told an interviewer in 1991. "Chekhov is one of the few writers that didn't write enough. You can't pay a writer much more of a compliment than that."
It could be said McGahern didn't write enough: six novels and three short-story collections in a career of 44 years. He always took his time, scrapping much more than he kept, sometimes writing more than 20 full versions of a single story. But then you could say, the more you explore his work, that most of it is a rewriting, a revising of a small stock of theme, incident and location. The setting is sometimes Dublin, occasionally London, but usually Co Leitrim where the soil is poor, "in places no more than an inch deep". The period is most often the 1950s, and even in stories set later the Troubles do not intrude. He delves into the tensions between Catholic Irish and representatives of the Protestant Ascendancy, but always at a personal level.
On the page McGahern is a realist, and some consider him conservative, but taken collectively the stories have an experimental edge, or at least a strange one. Consider the way he reuses certain characters, most notably an emotionally abusive farmer and his second wife, Rose, who appear prominently in the stories Wheels, Sierra Leone and Gold Watch, and are mentioned in several others. In each of these stories the narrator visits from Dublin and clashes with the father. Yet Rose, the farmer and the returning son are not intended to be the same characters from story to story. Rather they are archetypes of some kind, and through its repetition the struggle enacted in each story comes to seem like some eternal battle from myth. 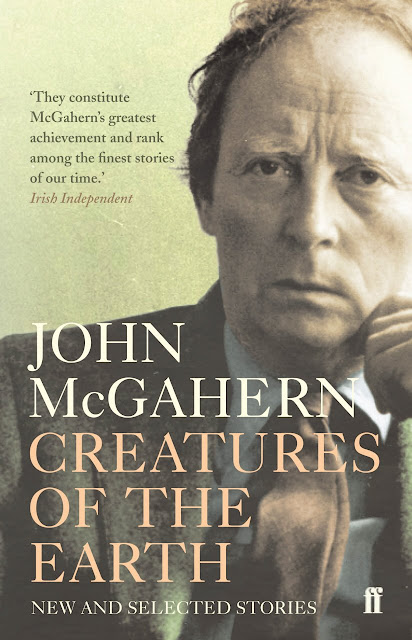 The father is there from the beginning, incarnated as a Garda sergeant in McGahern's first novel, The Barracks (1963). At the time Anthony Burgess said the book "has caught so well the peculiar hopelessness of contemporary Ireland", and it is true that a strand of hopelessness runs throughout McGahern's work. As Nicholas Wroe notes, "the horrors are always there in McGahern", even if they are of a quiet, despairing sort, as when a hungover and jilted man looks on a Dublin street:

There were five steps up to each house. The stone was granite. Many of the iron railings were painted blue. Across the street was a dishevelled lilac bush. They'd taught us to notice such things when young. They said it was the world.

Or when a teacher (McGahern's occupation before his second novel, The Dark, was banned, and he was driven from Ireland) stares out of the classroom window, willing three o'clock:

Outside, the three stone walls of the playground run down to the lake, the centre wall broken by the concrete lavatory, above it the rapid sparkle of pinpoint flashes of sunlight on the wings of the blackdust swarm of flies; and on the windowsill in a jam jar a fistful of primroses some child has gathered from the May banks. In the stream of sunlight across the blackboard the chalkdust floats, millions of white grains, breathed in and out all day, found at night in the turnups of trousers, all the aridity of this empty trade.

Or when a priest remembers his mother's descent into senility:

… and then the day came when he had to admit that she no longer knew who he was, had become like a dog kennelled out too long.

This is brutal material in its way, and McGahern's dark energies are nowhere more forcefully expressed than in the extraordinary Hearts of Oak, Bellies of Brass (1970). Collecting his pay after another punishing day of shovelling on a London building site, the narrator reflects:

I love to count out in money the hours of my one and precious life. I sell the hours and I get money. The money allows me to sell more hours. If I saved money I could buy the hours of some similar bastard and live like a royal incubus, which would suit me much better than the way I am now, though apparently even as I am now suits me well enough, since I do not want to die.

The men labour, drink, and "go round to Marge and Kathleen", prostitutes who live "in the condemned row, moving from empty house to empty house ahead of the demolition. Limp rubbers floated in the gutters Monday mornings while they slept in the daylight." It is a cycle seemingly without meaning or end, one of many that confirms the wheel as the central image of McGahern's work: the identification of life as a recurrent pattern. In Parachutes it reappears as a depressive's vision:

It was as if we were looking down a long institutional corridor; the child in the feeding chair could be seen already, the next child, and the next … the lawnmowers in summer, the thickening waists. It hardly seemed necessary to live it.

In the story Sierra Leone, one of several McGahern stories about unsuccessful love affairs, the narrator notes with weary acceptance, "the old wheel turned and turned anew, wearing my life away; but if it wasn't this wheel it would be another." But in Oldfashioned, one of his most ambitious and remarkable stories, some air is let in, if only temporarily: "The wheel of the summer turned pleasantly. The seeds pushed above ground, were thinned. The roses and the other flowers bloomed. The soft fruit ripened and Mrs Sinclair started to make jams in the big brass pot." And in the late story The Country Funeral, the repetitious cycles of country life, in particular the wake and burying of the dead, are seen not as markers of the claustrophobic narrowing of life, but acts that deepen the connections between people.
From McGahern's earliest books there is an extraordinary grace and power to his descriptive writing, particularly of landscape. (Dublin does not receive the same careful attention, and remains – perhaps intentionally – insubstantial.) His descriptive abilities grew as he continued to labour at his style, culminating in the descriptions of Gloria Bog in The Country Funeral, located in the heart of the territory where so many of his stories take place. He describes the bog with great beauty and plainness of language, first at dusk:

Without any warning, suddenly, they were out of the screen of small trees into the open bog. A low red sun west of Killeelan was spilling over the sedge and dark heather. Long shadows stretched out from the small birches scattered all over the bog.

And then at night:

It was a clear moonlit night without a murmur of wind, and the acres of pale sedge were all lit up, giving back much of the light it was receiving, so that the places that were covered with heather melted into a soft blackness and the scattered shadows of the small birches were soft and dark on the cold sedge.

If you have not read McGahern before these passages may seem unremarkable. I suspect their effect, and that of his prose generally, depends in part on repetition, its wheeling returns to the same places, the same people, the same situations, and that its impact grows with each repetition just as a ritual accretes meaning the more it is performed. Beneath these descriptions of Gloria Bog lies the sediment of his many other evocations of Leitrim, a landscape he recreated with the persistence of Paul Cézanne painting Mont Sainte-Victoire. "My only concern", as McGahern once said, "is that I get the sentence right and describe my world clearly and deeply."

Posted by Ficciones at Wednesday, September 07, 2016