So long, Marianne./ Leonard Cohen's final letter to his muse

So long, Marianne. Leonard Cohen's final letter to his muse

The woman who was Leonard Cohen's muse and inspired songs like "Bird on a Wire" and "So Long, Marianne" has died. Marianne Ihlen passed away on July 29th. She was 81 years old.
She and Cohen were lovers in the 1960s after they met in Greece. When Cohen learned Ihlen's health was deteriorating, he immediately penned her a letter. Her close friend Jan Christian Mollestad, a documentary filmmaker, read Cohen's letter to her before she died.
Ihlen's funeral is planned for Friday in Oslo.
As It Happens guest host Rosemary Barton spoke to Mollestad in Norway.

"When I read the lines 'stretch out your hand,' she stretched out her hand"- Jan Christian Mollestad

Rosemary Barton: We're very sorry to hear about the death of Marianne. How did you meet her?
Jan Christian Mollestad: I met her while I was making a documentary film about her first husband, who was a very famous Norwegian writer.  We went to Hydra, the same place they went on their first big trip but as we got closer to Hydra, more and more of the talk was about Leonard because her husband deserted her right after the birth of their son.

When Marianne came to Hydra after giving birth in Norway, her husband was not there. There was only one shop in town. And she came in there with her little basket, with her little baby and she was crying to this Greek lady. And then in the doorway, she was just seeing the silhouette, was a man who was calling to her and said 'I know that you're Marianne, and I know what's happened, come out in the sun and have a glass of wine.' And that was Leonard and he took such good care of her. 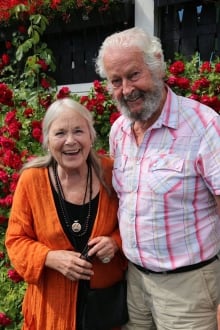 Marianne Ihlen and Jan Christian Mollestad have been friends for over a decade. (Jan Christian Mollestad)
RB: How did you find out that Leonard Cohen had written her a special note?
JCM: Marianne and I were very close. Fourteen days ago, I got a text from her saying 'Hello, it's Marianne, I'm in the hospital in Oslo. I'm dying. Please take care of my husband Jan and my son." And I phoned her immediately and said "what, what?!"
She said doctors found that she was in the last period of leukaemia. She said I'm going to die, I only have a few days left. And we rushed to the hospital, and she said please could you tell Leonard what is happening. So I went home and I sent him a letter telling him that, unfortunately, it seems like Marianne only has a few days to live. It took only two hours and in came this beautiful letter from Leonard to Marianne. We brought it to her the next day and she was fully conscious and she was so happy that he had already written something for her. 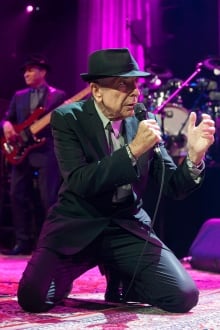 Leonard Cohen sent a heart-touching goodbye letter within two hours of finding out that Marianne Ihlen was on her deathbed. (The Associated Press)
RB: I know you don't have the letter in front of you, but can you remember part of it?
JCM: It said well Marianne it's come to this time when we are really so old and our bodies are falling apart and I think I will follow you very soon. Know that I am so close behind you that if you stretch out your hand, I think you can reach mine. And you know that I've always loved you for your beauty and your wisdom, but I don't need to say anything more about that because you know all about that. But now, I just want to wish you a very good journey. Goodbye old friend. Endless love, see you down the road…
When I read the lines "stretch out your hand," she stretched out her hand. Only two days later she lost consciousness and slipped into death. I wrote a letter back to Leonard saying in her final moments I hummed "A Bird on a Wire" because that was the song she felt closest to. And then I kissed her on the head and left the room, and said "so long, Marianne."
To hear more on the story of Marianne Ihlen and Leonard Cohen, listen to our full interview.

pp-facebook
Leonard Cohen
hace aproximadamente una semana
The death last week of Marianne Ihlen, the woman immortalized in “So Long, Marianne,” has evoked an overwhelming response from those who knew Marianne well, those who knew her only as Leonard Cohen's muse, and even those who previously didn't know there was a "real Marianne." Because of the intimate connection between Leonard Cohen and Marianne Ihlen, Leonard's Facebook Page now offers viewers the opportunity to submit their thoughts, memories, poems, etc about Marianne - inc...
Ver más