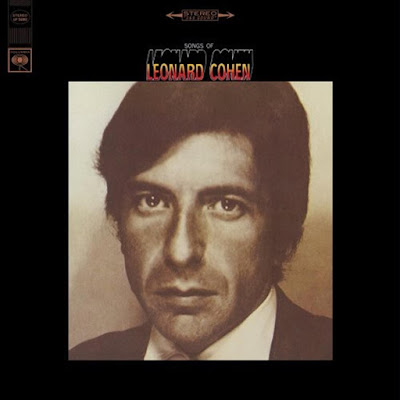 Our writers are picking their favourite albums. Here, Andrew Pulver explains how he fell for the dark charms of a figure who used to be a joke to him

'd be lying if I said Leonard Cohen's records soundtracked my adolescence, or comforted me during student awkwardness. The sad truth is, as I suspect it was for most gormless teenagers growing up in 80s suburban Britain on a steady diet of post-punk, Berlin-era Bowie, and the Velvet Underground, Cohen was a joke.
Blame, if you will, The Young Ones. Looking back, I don't quite understand how, but the show was an early-80s religion, and their running gags at Cohen's expense. Consequently, Cohen's actual music was a sealed book to me; if I ever thought about it, I suppose I assumed he was a hippy, like Neil. File under lame.

Then at some point in the mid-90s I idly slapped on a VHS of Robert Altman's McCabe and Mrs Miller. Warren Beatty is a card-playing gunfighter on the American frontier at the turn of the century, and Julie Christie an opium-addict brothel keeper who goes into business with him. But I digress. As the opening credits scrolled across the screen, and Beatty wandered into view on horseback, a fantastically atmospheric tune swelled on the soundtrack, telling us that, as Beatty looked through a saloon doorway in a tumbledown, rain-sodden town, that here was "just some Joseph looking for a manger". This required some investigating: who was this sonorous balladeer, whose songs seemed to be bone-hard fables issuing from some pre-industrial source, and strangely clear-voiced and completely contemporary? This, it turned out, was Leonard Cohen.

Once over the shock that the most sneered-at musician of the previous two decades was actually a magnificent performer of limpidly beautiful songs, it was time to go to the source. McCabe's opening-title music turned out to be a little number called The Stranger Song. (The remarkably prescient Altman had also added the songs Sisters of Mercy and Winter Lady to the film, as well as quirkily recycling several different versions of Bird on a Wire for his 1978 film A Wedding.) I doubt it's possible to be quite so ignorant of Cohen's music these days, when Hallelujah blasts from a Simon Cowell-produced TV show, but there it is. I got hold of the album the McCabe music came from, and became a Cohen acolyte for life.
So what's so great about his stuff? I'm not a proper music writer, but for me, it's a number of factors. First and foremost, Cohen is such an empathetic figure: wise-seeming, morally insightful, emotionally generous and a magnetic performer. (I managed to weasel tickets to two of his 2008 London concerts and was properly awestruck at the way the man conducted himself on stage.) He appeared to distil all the qualities I would have hoped to find in other heroes of mine, such as Saul Bellow and Billy Wilder, neither of whom I had seen in the flesh.
Then, of course, the music itself. Cohen's trademark, in his early, brilliant years at least, is an apparently rambling discourse on some convoluted human relationship that invariably takes an interesting position on the fluid sexual politics of the time – remember, Cohen was putting his most classic work together in the late 60s high summer of free love and the permissive revolution. The Stranger Song isn't simply the chronicle of some hippie-era love machine, it's about complicated emotional lives on both sides of the gender divide: "But now another stranger seems/ to want you to ignore his dreams/ as though they were the burden of some other." Compared to your traditional love song, Hey That's No Way to Say Goodbye sees far beyond the demands of the moment in its upbeat fatalism of post-breakup friendship: "You know my love goes with you as your love stays with me/ it's just the way it changes, like the shoreline and the sea." And though it sounds sleazy, Sisters of Mercy is as chaste a depiction of a menage a trois as it's possible to get: "And you won't make me jealous if I hear that they sweetened your night/ We weren't lovers like that and besides it would still be all right." In fact, this is Cohen's special skill, to sound like he's been around the block so many times he's come out the other side; he can stick up for old-fashioned moral values from a position from deep inside the hippy gender war.
If his debut album has one failing, it's perhaps that the words take priority over the tunes: Cohen would come up with properly stirring melodies later in his career – First We Take Manhattan, Tower of Song, Hallelujah – but his default position here is a plaintive, repetitive single line, a guitar and not much else. It's no surprise to learn he argued constantly with his producer John Simon, who was always looking to stick fancier instrumentation over the top. No doubt it's a legacy from his earlier interest in straight poetry, but it seems clear that music-making help free Cohen's lyrical talent, allowing him to break away from the largely terse, heavily metred work he'd published in his verse collections.

And I still haven't got around to my favourite on the record. So Long, Marianne encapsulates Cohen's brilliance, in all its glorious awkwardness. It's both a record of an intimate relationship and its foundering; a song filled with both brilliant lines ("We met when we were almost young/ deep in the green lilac park") and terrible ("to laugh and cry and cry and laugh about it all again"); haunting ("You held on to me like I was a crucifix") and brutal ("I'm cold as a new razor blade"). A perfect song, perfectly Cohenesque. Thanks Leonard.
• You can write your own review of this record on our brand new album pages: once you're signed into the Guardian website, visit the album's dedicated page.
Or you could simply star rate it, or add it to one of your album lists. There are more than 3m new pages for you to explore as well as 600,000-plus artists' pages – so simply find their albums and get to work.