A brief survey of the short story part 38: Isaac Babel


A brief survey of the short story part 38: Isaac Babel

Somehow both flamboyant and spare, these stories hum with a sense of the new
Chris Power
theguardian.com, Friday 10 February 2012 10.22 GMT
Jump to comments (18) 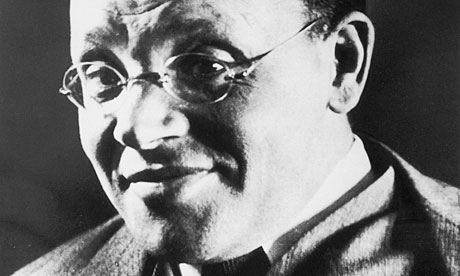 Isaac Babel. Photograph: Evening Standard/Getty Images
On 15 May 1939, when Isaac Babel was arrested on false charges and taken to Moscow's Lubyanka prison, the NKVD also confiscated 15 manuscript folders, 11 notebooks and seven notepads. "They did not let me finish," he told his common-law wife, and it will never be known what their contents might have added to his relatively modest corpus of three story cycles, two plays, film scripts and assorted fragments: in 1988 the KGB officially announced having no record of these papers. That they issued the statement at all is testimony to the persisting impact of Babel's violent, beautiful, troubling short stories.
Born in 1894 into a bourgeois Odessan Jewish family, Babel grew up in a pre-revolutionary Russia where the term "Russian" excluded Jews, and pogroms were common. That Odessa was probably the most liberal city in the Empire is part of what Grace Paley described as Babel's "lucky composting". He published his first story in 1913, and was noticed by Gorky in 1916. According to Babel (not the most trustworthy source) Gorky told him to "go among the people" to better his writing - so he soldiered on the Romanian front, possibly worked as a translator for the Cheka, crewed on a food requisitioning barge, and in 1920 joined General Budyonny's Cavalry Army on the Polish front as a war correspondent. "Only in 1923," he writes, "did I learn how to express thoughts clearly and not at too great length. For this reason I date the beginning of my literary work from 1924".
The stories Babel wrote then were part of the Red Cavalry cycle (collected in 1926), based on his experiences of the Soviet-Polish War. They hum with a sense of the new: Babel's writing is a flamboyantly spare, jagged collage of eyewitness report and visionary poetry. Impossible at it was for either to have influenced the other, Babel and Hemingway are strikingly similar, but Babel possesses an added dimension of expressionist oddness. He also takes more obvious pleasure in the grotesque; he loved Maupassant, and Donald Rayfield notes that both writers "frankly relished squalor, corruption and violence."
Red Cavalry, spattered with all three, describes the course of the war alongside the narrator Lyutov's ("Ferocious", Babel's risible real-life nom de guerre) transition from innocence to experience. It is a complex journey filled with tensions: Lyutov is a Jewish intellectual amid antisemitic men of action; unable to help a wounded comrade who begs to be shot ("The Death of Dolgushov"), he later begs fate "for the simplest of abilities - the ability to kill a man" ("After the Battle"). While irony is everywhere in Babel's work, here it shifts as erratically as Lyutov's squadron, and the terrible end of "After the Battle" may be a sincerely Nietzschean appeal. An apparently comic but still troubling treatment of this theme is found in the best-known Red Cavalry story, "My First Goose".
Uncertainty swarms both within Babel's work and around his life, and as Red Cavalry launched him to nationwide fame he worked to deliberately conflate the two. His three story cycles - the Runyonesque Odessa Stories, Red Cavalry, and the supposedly autobiographical stories of childhood he intended to publish as The Story of My Dovecot - can be seen as sharing a single narrator, the eternal observer with "autumn in his heart and spectacles on his nose" ("How It Was Done in Odessa" (1923)). Babel's childhood stories have the quality of memoir, but are largely invented. For example, the writer never witnessed the pogrom described in two of his greatest stories, "The Story of My Dovecot" and "First Love" (both 1925), despite critics such as Frank O'Connor and Lionel Trilling declaring the event central to his art. In 1931 he sent his mother a packet of stories with the note, "All the stories are from the childhood years, with lies added, of course, and much that is altered."
As the relative artistic freedom and flux of the 1920s calcified into the era of Stalinist directives, Babel's production slowed. In 1934, responding to attacks on his productivity at the First Congress of Soviet Writers, he audaciously described himself as "master of the genre of silence". He wrote still, but his greatest work (excepting whatever the NKVD might have snatched) was behind him. It is enough, nevertheless, to consider him one of the great short story writers, whose influence has been particularly notable in America. His semi-autobiographical games continue in the novels of Philip Roth; Grace Paley's vivid stories of the Bronx pulse with the same energies as his Odessa; his habit of breaking up passages of concrete description with rapturous or lurid evocations of nature - the sun "rolling across the sky like a severed head" ("Crossing the Zbrucz"), or stars that "crept out of the night's cool belly" ("The Ivans") - can be seen at work in Denis Johnson's Jesus' Son, and its many progeny in turn.
The formalist critic Viktor Shklovsky wrote: "Babel's principle device is to speak in the same tone of voice about the stars above and gonorrhoea." It's a fine description, bettered only by Babel's own. In the story "Guy de Maupassant" (completed 1922, published 1932) Babel, or at least a narrator we are led to suppose is Babel, pronounces: "A phrase is born into the world good and bad at the same time. The secret rests in a barely perceptible turn. The lever must lie in one's hand and get warm. It must be turned once, and no more." To him words are an army, "an army in which all kinds of weapons are on the move. No iron can enter the human heart as chillingly as a full stop placed at the right time." This iron, an aggressive partner to Kafka's "axe for the frozen sea within us", is something Babel learned to wield with recurring, unerring accuracy.
Quotations are taken from David McDuff's translations of the stories.

Email ThisBlogThis!Share to TwitterShare to FacebookShare to Pinterest
Labels: A brief survey of the short story, Chris Power, Isaac Babel