Denis Johnson / A brief survey of the short story

A brief survey of the short story part 36

A Sacred Heart Jesus, an iconographic representation of a drug capsule, a light-damaged photograph of tract housing in middle America, and an epigraph from"Heroin" by the Velvet Underground. If there was ever a book designed to prove irresistible to my 17-year-old self, the Faber first edition of Jesus' Son by Denis Johnson is it. Along with Donald Barthelme's Forty Stories, bought the same summer, it was the one that most powerfully demonstrated to me the unique possibilities of the short story.
Published in 1992, Jesus' Son is one of the best short story collections of the last 25 years, and its current unavailability in the UK is a joke. Its brief, linked stories take place in 1970s Iowa, Chicago, Seattle, and Phoenix. The narrator, "Fuckhead", is an alcoholic and drug addict. In content, his stories are like those shared at Alcoholics or Narcotics Anonymous meetings, where participants are encouraged to talk about past tribulations; there is a freewheeling, mixed-up quality to them. They aren't always arranged in chronological order and might not have happened the way Fuckhead thinks. Some may not have happened at all. 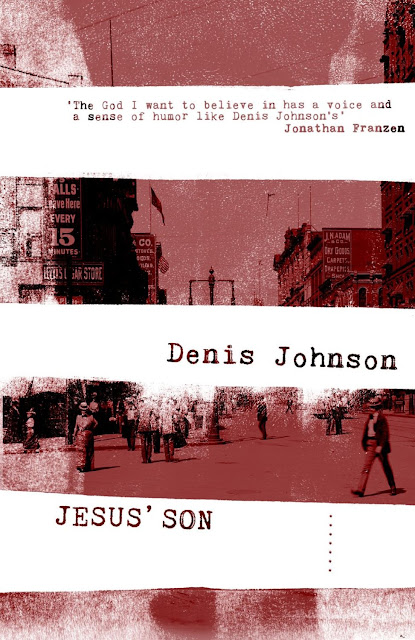 Fuckhead's stories are lousy with things gone or going wrong: car crashes, shootings, overdoses, burglaries, abortions. At the foreshortened conclusion of "Two Men" there is possibly the rape or beating of a woman whose home has been broken into. The prose bedrock across which Johnson scatters these misadventures is unadorned and frank – "I went out to the farmhouse where Dundun lived to get some pharmaceutical opium from him, but I was out of luck" – the product of a dulled sensibility that awards everything an equal and dazed relevance, whether it's a length of copper wire or a corpse. But when experienced at greater length his rhythms generate an intense deadpan comedy. Amid these elements lie bursts of poetry that appear without preamble, like the desert flowers Fuckhead admires in Arizona:

To catch the bus home each day I walked through a vacant lot, and sometimes I'd run right up on one — one small orange flower that looked as if it had fallen down here from Andromeda, surrounded by a part of the world cast mainly in eleven hundred shades of brown, under a sky whose blueness seemed to get lost in its own distances. Dizzy, enchanted — I'd have felt the same if I'd been walking along and run into an elf out here sitting in a little chair.

John Updike compared Johnson's writing to the Jayne Anne Phillips of Black Tickets, Thom Jones, Raymond Carver (who taught Johnson at the University of Iowa in 1969), and "the gleaming economy and aggressive minimalism of early Hemingway." Sometimes Johnson also invokes the phantasmagorically twisted realism of William Burroughs. He writes of a drug hotel in "Dirty Wedding": "The reality of it gave out as it rose higher above First Avenue, so that the upper floors dribbled away into space. Monsters were dragging themselves up the stairs." In "Steady Hands at Seattle General", we could be in Interzone when apparently innocent objects like vases, beds and ashtrays appear "wet and scary, hardly bothering to cover up their true meanings".
These hallucinatory moments are relayed as apparently empirical truth, but even as they acknowledge the drug user's tendency to supply counterfeit meaning, they still allow the possibility of the genuinely numinous. In "Emergency", the best-known story from Jesus' Son, Fuckhead and Georgie are lost in a snowstorm when they find themselves in a military graveyard:

On the farther side of the field, just beyond the curtains of snow, the sky was torn away and the angels were descending out of a brilliant blue summer, their huge faces streaked with light and full of pity.

In turns out the pair, high on prescription drugs stolen from the hospital where they work, haven't stumbled into a graveyard but a drive-in cinema, and the angels are really "[f]amous movie stars ... laughing out of their gigantic, lovely mouths". Despite the bathos, the vision's power continues to pulse as an undercurrent throughout the remainder of the story. At its conclusion Georgie, who earlier solved a problem no one else could by pulling a hunting knife out of a patient's eye, is asked by a hitchhiker what he does for a job. "I save lives," he says. Burnished by the vision's afterglow, the statement is simultaneously ludicrous and heroic.
"The stories of the fallen world, they excite us," Johnson told an interviewer in 2003. "That's the interesting stuff." It's a world his work never entirely leaves. The long, historical and subtly magical realist story "Train Dreams", winner of an O Henry Award in 2003, describes the life of a taciturn logger. This largely surface-level story of a man in a landscape has ties, as James Wood has noted, to Hemingway's "Big Two-Hearted River". It's written in a more solemn register than Johnson normally uses, but describes characters – a hobo dying under a tree; a prospector blown up by dynamite; a man shot by his own dog – unmistakably related to the hapless wanderers of Jesus' Son. Likewise the 2007 story "1966", which reappears in the novel Tree of Smoke, describes a desultory then suddenly violent shore leave in Honolulu that, but for the tropical weather, might have come from the earlier collection.
According to Geoff Dyer, Johnson has described his own writing as a "zoo of wild utterances", but the impact of his prose results from care, not chaos. The sudden death of a young man in "Train Dreams", deriving power from its matter-of-fact description, recalls Tolstoy's "Alyosha the Pot". In "Dundun" rural depression and the narrator's bleak mental state fuse in the description of a dead soybean crop, "the failed, wilted cornstalks … laid out on the ground like rows of underthings". In "Emergency", a country fair "with sad resignation … bares its breasts". The metaphor sounds addled at first, but Johnson's writing persuades readers that there are alternative ways of looking at the world, and that some of them get closer to the truth than plain facts ever can.

Email ThisBlogThis!Share to TwitterShare to FacebookShare to Pinterest
Labels: A brief survey of the short story, Chris Power, Denis Johnson