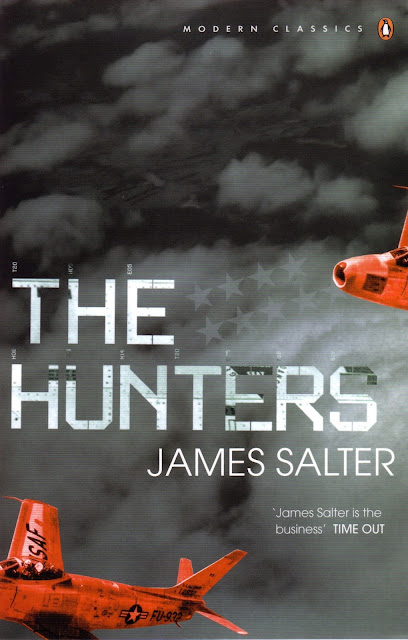 by James Salter
BIOGRAPHY
Extract
It was almost noon when they crossed the Korean coast. Cleve stared anxiously at it, drifting past beneath the wing. He knew a moment of acute fulfillment, for here he would make a valedictory befitting his years. He had come along way for it, and much was still ahead; but already he could feel self-imposed obligations, his burden of pride, diminishing, actually leaving him. He began to experience something of the exhilaration that came with triumph. In this war, he was more certain than ever, he would attain himself, as men do who venture past all that is known.

He looked about the cabin. Everyone was leaning toward the nearest window to see the land below, which lay calm as wreckage in the clear winter air. Not much could be distinguished to show where the war had been. Smooth fields of snow mottled everything, and the rivers were as pronounced as veins, but he did not think of an ancient mother of men. His eye was the flyer's. He saw the hostile mountains, the absence of good landmarks, and the few places flat enough to land in an emergency.
They had fought down there, on foot, taking weeks to move the distance he went in an hour. He was arriving like a tourist, in comfort. He felt the detachment of a specialist, and the importance. His gaze moved for a while to the heavy wing and the out-board nacelle, which was the only one he could see. A broad slick of oil, black and gleaming, was spread back from the cowling. He went back to staring moodily at the land.
Within an hour they had landed at Seoul. It was a blue, bitter February afternoon. Cleve stepped off the plane onto Korean ground frozen as hard as plaster. A sharp wind was keening across the flats. It stung his cheeks and made the rims of his ears ache. It came with the sharpness of steel into his lungs when he breathed. His eyes watered.
He followed along in the string of debarking passengers. They walked across a bare expanse of earth toward buildings near which were mounds of baggage, barracks bags, and groups of waiting men huddled in their overcoats. He walked past them and into the biggest hut. Inside it was crowded, too, and almost as cold. Men were clustered about the two oil stoves, warming their hands. Cleve hesitated, then began pushing through them with difficulty toward a counter he could see at the far end of the room. There he inquired, as soon as he had an opportunity to, about going onto Kimpo. He had no idea how long an additional trip it might be.
'I'll find out for you, Captain,' the corporal said, turning away. 'Hey, how do you get from here to Kimpo?'
'To where?'
'Kimpo.'
'There's a bus that goes there.'
'When does it run?'
'How should I know? Look at the schedule.'
'Where's the schedule?'
'Oh, Christ.' The other man walked over with an expression of disgust on his face. He was a sergeant. He leafed through a foliage of paper tacked on the wall and quickly located the schedule. He ran a finger down its columns.
'The next one is due to leave here in,' he looked at his watch, 'thirty-five minutes.' He turned to Cleve. 'Are you the one who's going to Kimpo, Captain?'
'That's right.'
'You can catch it just outside, on the road?'
'Thanks.'
Cleve sat down on one of the benches near the counter to begin an uncomfortable wait. He had meant to ask how long a ride it would be, but he suddenly felt it did not make any difference. He listened to pieces of conversation. Everybody seemed to be on the way back to Japan. In Japan, everybody had been going back to the States. He was moving alone against this tide. It was always that way, he reflected, the feeling of arriving late, after everything was over.